“Some say there was a better formula for the iron produced in that time, and that this formula has since been lost.”

Hint for the newby: these kinds of statements are always BS and have more to do with an impression the speaker is trying to make than anything else.

I’ve never bought any, I simply inherited all the cast iron from the prior two generations of my family. I have one very very Griswold with a matching cast lid that is the most divine piece of cooking equipment I have owned.

Great save on the pan. I think seven cycles of seasoning might be overkill. Mmmm. Savory overkill with sage.

these kinds of statements are always BS and have more to do with an impression the speaker is trying to make than anything else.

Well no. In truth there is some crappy cheap cast iron out there made from low quality iron.

That some people have crossed over that reality with a preference for pieces from the past (before recycling was a significant source of raw material) is not someone trying to pull shit on you. It’s an easy mistake. And honestly, buying 100 year old cast iron is a good way to avoid cheaply made cast iron. Its not accurate to assume that all new stuff sucks, but all old stuff that has survived 100 years is, probably, quite good.

I’m sure there are venn diagrams we could use. no offense intended.

I’ve got an old Griswold that we recovered from the attic of a house we used to live in. It does indeed still cook up a nice scramble now and again. Apparently, later Griswolds go for less money than early ones. It is felt that as the company declined financially, quality control was lost. But I’ve never had an issue with mine.

Now you must investigate the joys of vintage Sunbeam waffle irons.

I bought a set of cast iron skillets at a discount tool “fair” a few years back. The big one cracked down the side after a few uses. Cheap garbage!

OTOH I found a Wagner Dutch oven last year. A bit rusty and dirty, but it cleaned up well: 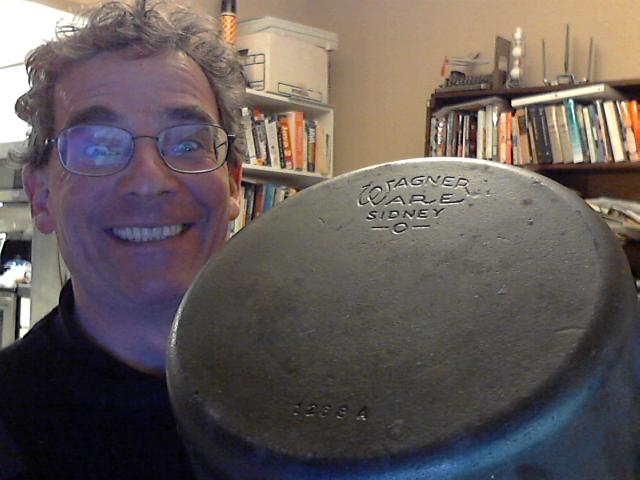 This was after round one of seasoning: 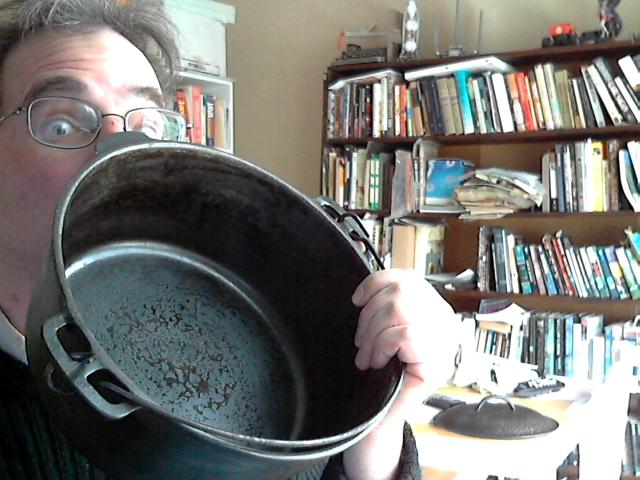 I’ve since given it a second round and the inside is nice and glossy. So far I’ve only used it for no-knead break baking.

No formula has been lost in the dark past. We just pay people better, so things are more expensive, which translates to more crap being passed off as decent. If there is a formula that has been lost it is the one that keeps the peasants in their huts.

The statement “The formula has been lost.” is meant to appeal to an absent and all-knowing authority. It is a statement fit only for a smoke and mirrors presentation. If someone says that to me I know they are either bullshitting me or are themselves naive.

I’m sure there are venn diagrams we could use. no offense intended.

I believe he was taking my quote out of context by mistake and not intending to leave off the sentence that very clearly says I have no clue about the veracity of the statement.

“Some say there was a better formula for the iron produced in that time, and that this formula has since been lost. But I can find no proof of this.”

Oh man I was just responding to the statement. I was not projecting that thought onto you at all. I got that you did not believe it either.

Push my button, get a response.

When newly married we bought a set of cast iron cookware at a local department store, I thnk around $25-30; this was 1974. Made in Taiwan. Still in use, large skillet is teflon like, others all good as new. Seems to work best on the ceramic cooktop, more even than gas in my experience.

more even than gas in my experience.

Cast iron is famously not even. It retains heat and gets to an even heat over time, but if not really warmed up you’ll get hot spots. It is also suggested to turn a pan while heating on gas to get the heat playing over more surface area.

I am not pretending to be an expert and YMMV. But:

I bought some. You won’t believe what happened next!

Sodium hydroxide is cheap and you won’t get the fumes and grease deposits you get from trying to bake off dirt on the oven clean cycle.

Your method is the more commonly accepted, collector/professional method.

I find oven cleaning method preferable to working with lye. Starting with food grade lye and mixing a solution to immerse the pans in sounds better than easy-off, to me, but both are less attractive than just the oven. I live on septic and don’t think these chemicals would be a good addition to the system. The oven cleaner could be thrown away in its trash bag, but a tub of lye has to go someplace.

If you have a septic tank, no. If you have mains drainage, believe me, sodium hydroxide is far more benign to the drains than modern shampoos and body washes. When I was doing this professionally, we were asked to discharge at a pH 9.5-10.5. A little alkalinity is good for drains.
I thought the word “Lye” died out early in the last century, obviously I’m wrong.

Why flax oil? I use coconut oil under the theory that it has a pretty high smoke point. Though thinking about it I suppose either way it’s going to be exceeding the smoke point. Is there some advantage in the omega 3 and 6 content?

(Edited to add, I didn’t mean to respond to kupfernigk specifically. Sorry!)

Straight up lye may be a pain to dispose of, but it’s easily remedied. Mix it with some muriatic acid, and what you’ll get is salt water, easy enough to get rid of.

If you think muriatic acid is too dangerous, just add vinegar. You’ll get sodium acetate in solution, which is readily biodegradable.

Heresy: Thick aluminum pans with ceramic coating are to my mind just as good as CI, much lighter and less likely to damage your kitchen.

I was just about to blaspheme myself. We got a porcelain-enameled frying pan and the pancakes are turning out better than they had in a long time. We had some very cheap non-stick pans and everything – including the pans – turned out burnt. I have a Lodge cast-iron pan but it seems like the center-surface won’t season. Maybe one day I’ll mess with that but until then, we’re very happy with the enameled pan.

I think flaxseed oil is used specifically because its smoke point is so low, something like 110°C if I remember correctly. I’m only half remembering from something i read a while ago but I think the idea is to get all the volatiles out early and just leave the polymerized carbon behind.