HOWTO make an intercom out of obsolete corded phones

I’m at work so I haven’t looked at the article closely so it may be addressed there, but my question is this:

Is it possible to make an intercom system using the existing telephone network in my house?

I have a phone jack in my basement, one in my room, one in the hallway, kitchen, etc… Is there an easy way to create a “party line” in my house without having any telephone service?

This project doesn’t seem to have a method of making the remote phone ring, making it pretty useless as an intercom with the phones they used. I guess if they’re both speakerphones and you leave them off hook constantly it might work, but you’ll want to have them on mute.

That is in fact what this video explains. All it does is splice in a power supply into an existing phone cord.

Cool! I’ll check it out. based on the diagram, i thought it might just describe a 2 phone setup. And you’re right. having a “ringer” or some other indicator would be very useful.

A bit too simple. No method of calling (any built-in ringer/ sounding device is probably AC-driven, to complicate matters) and the volume of your own voice would probably be too much without the little device that used to be called ASTIC. (Anti Side-Tone Induction Coil) in the UK Post Office Telephones government department (as was).

Dunno. If there’s wiring in place, it’s probably four wires. Might be six (3 pair) or eight (4 pair). In any which case working up a signaling system should be a fairly straight shot. I don’t think I’m going to run right out and do this. But I might look at what’s in thrift-store junk bins next trip that way. A wall wart should make a decent power supply with very minimal modification.

Most**US home telephone wiring is 2-pair, with https://en.wikipedia.org/wiki/RJ11#Pinouts RJ11 connectors. The primary line is on the red/green pair, and if you have a second line it’ll be on the yellow/black pair. You can get two-line phones that use both, or two-line connector boxes that break out both lines into two jacks (using the red/green pair on both, so regular phones work.)

So if you’ve got one land-line, you can still build this intercom on the second pair without it interfering.

** Re: “most” - Your mileage may vary, especially in older houses. Maybe they’ve got two-wire, and I’ve lived in a place that had 3-wire, and maybe the wires have old discolored cloth insulation instead of colored vinyl, so good luck telling which is which. But anything since the 60s or so should be useable.

Just yell “HEY PICK UP THE INTERCOM PHONE THINGYTHING”. Repeat until they pick it up and then have your conversation.

Well, while it’s a little light on practical details and fairly heavily typo’d, it looks like it wouldn’t be that hard to induce ringing on the makeshift intercom.

ETA: I’m not competent at even soldering so it’s quite likely I’ve misjudged the difficulty.

ETA^2: This one has an actual schematic. Again, not competent on this subject but it looks plausible enough.

Shit howdy! There’s my Saturday for me & the kids! I’m gonna use this baby right here for in the house: 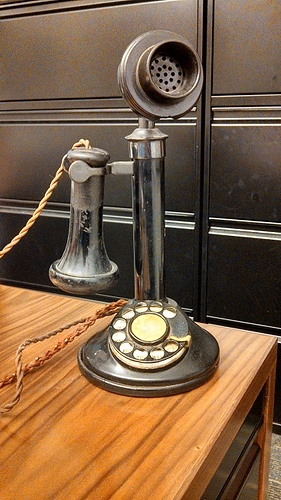 (note the absence of a bell) and a wall-mounted cranky-type antique (currently mounted in my dining room as decoration) in my garage/music studio! The wall one does have mechanical bells, so it should be pretty easy to install a remote bell-ringing switch in the house next to the above phone. And then I can be hailed from afar whilst toiling away on hotrod or drumkit!

This has been a very good Boing day for me. =^D

when I was 6-7 my father got a similar toy for me with 2 corded toy telephones and a loooooooong cable. For whatever reason the toy refused to work and unfortunately stayed behind the couch gathering dust for a few years. I have no idea what happened to it eventually.
It would be a fun project to try with my kids now, lets hope it fares better this time.

It’s saying something that the toy was probably built the same way as this (battery and a single resistor) and it still managed to fail. That’s some quality QC right there.

I know, right? What are we, primitives?

Don’t forget to answer properly:
Saying ‘Ahoy-Hoy’ was at One Time the Preferred Way to Answer the Phone

Ah yes, thank you. I had been wondering why my cries of “view halloo” had been sending the squirrels scampering.