Know who could use a little love for Martin Luther King Jr. day? The folks at the Jesse Helms Center. After all, they’re probably stuck at work when most Americans have the day off considering that Mr. Helms led the congressional opposition to the holiday, calling the assassinated civil rights leader a “law breaker who was manipulated by communists.”

I humbly suggest that we all post our favorite thoughts on Dr. King’s legacy by posting them on the Jesse Helms Center’s facebook wall.

Day off? That’d be nice.

Turns out my kid’s school is closed. Which we discovered in the parking lot.

Turns out my kid’s school is closed. Which we discovered in the parking lot.

How long has he worked that con?

Parental error. Neither of us checked the school calendar; it’s a private school, but apparently still linked to the public school schedule. I had assumed somebody would have mentioned it on Friday when I was in the room (it’s pre-K). They send home what seems like several fliers a day, so I thought I’d see one; and since I didn’t see one … and didn’t expend any more effort…

I posted this on the Jesse Helms Center’s facebook page but it looks like they took it down for some reason. I guess that means they are indeed open today! Maybe this would be a good opportunity for people in the Charlotte area to visit the museum and commemorate the late senator’s role in the civil rights movement. 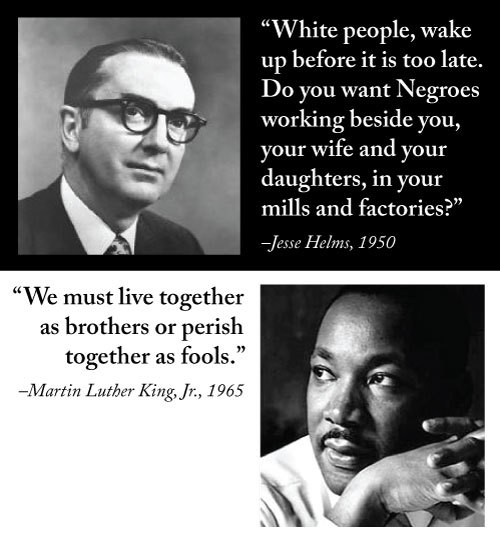 This is most excellent. I approve this message!

And the following men voted against the holiday on a state level.

Ah, the ‘If you never admit it, you never really lost’ school of thought.

Are you telling me they’re all men? And white? And Republicans?

Edit: oops, I missed that Shelby was a Democrat at the time. Although apparently No True Democrat.

I prefer a Dixie Cravat

This topic was automatically closed after 760 days. New replies are no longer allowed.