If Napoleon wasn't defeated at Waterloo, then where?

Bastards won’t be happy until every tale of glory is dragged in the mud of bathos, will they? (Or the bath of muddos maybe.) Next they’re going to say Abraham Lincoln never fought Hitler hand-to-hand.

Lincoln fought vampires, dummy. Let me tell you about the time I snorkeled into Tokyo Harbor with the surrender papers…

At least Richard Sharpe survived Waterloo. They can’t take that away from me.

(Napoleon’s Last Battles, for example, had scenarios for Ligny, Quatre Bras, La Belle Alliance, and Wavre, although that was to avoid confusion between their game La Belle Alliance, their previous game Napoleon at Waterloo, and their rival’s game Waterloo.)

A rare example of the lesser-spotted Not-Dead Sean Bean

I don’t think this is any great secret to anybody who has actually been to Waterloo and the battlefield. They’re close to one another, but definitely not the same place. But then, there aren’t really many good reasons to go to Waterloo and even fewer to go to the battlefield (unless you like to look at potato plants and dusty 1950s animatronic technology – they’re really terrible at attracting tourists).

Ohhh! You imposter! There weren’t ANY papers. They were silicon chips! I should know, my grandmother brought them back from Alpha Centauri when she went to the Walmart there.

Was this before or after you moved to the small village of London, on Mars, just outside the capitol city of Wibble?

I’m of the opinion that the real defeat of Napoleon probably occurred in Leipzig at the Battle of the Nations. This doesn’t sit well with other Britons because the only British contingent involved was a company of the Rocket Troop (derided in Sharpe and famously disliked by Wellington), under command of the Swedish King (A Frenchman who has risen to greatness in Napoleon’s army!).

In fact the point at which Napoleon’s defeat became ultimately inevitable was probably during the Russian campaign, as others will likely note; the French army spent, skilled veterans, artillery, and cavalry alike were so effectively demolished during this campaign (mostly during the retreat, due to hunger, disease and harassing action rather than open battle; contradicting the myth, Napoleon had no intention of conducting a war in the Russian Winter if he could help it), such that French troops after this point were inexperienced, hastily trained and less well equipped due to the speed with which armies had to be raised. A good deal of the cavalry had to be raised from among French Allies such as Poland (and the death of Prince Joséf Poniatowski at the Battle of Leipzig - a relative of whom I recently had a surreal conversation with - probably brought an end to significant Polish support).

These factors made conducting war much more difficult for Napoleon and so rather than seeing his post-Russian campaigns as hubristic, I rather consider that they would have been nowhere so near-run under less able command. At Waterloo his forces were outnumbered by the British alone, and yet he made such a mess of Wellington’s army that they still had to rely upon Prussian reinforcements to secure victory. And further, I don’t think that Napoleon’s continual engagement in warfare is due to personal aggrandisement, but rather down to the continual pressure being heaped upon Republican France by the monarchies, both constitutional and absolute, surrounding it. Most of the wars were not started by Napoleon but rather by one of the many British-funded coalitions, and the invasion of Russia was, I am sure, not motivated by powerlust or greed, but by the desperate need to force the Russian royal family to come to terms via a decisive defeat in battle. That is to say, I am becoming convinced that Britain was on the wrong side of history, and that if you examine the social change of the subsequent 50 or a hundred years in the nations of mainland Europe, you see the indelible mark of Napoleon’s France upon them.

I’m of the opinion that the real defeat of Napoleon probably occurred in Leipzig at the Battle of the Nations. This doesn’t sit well with other Britons because the only British contingent involved was a company of the Rocket Troop (derided in Sharpe and famously disliked by Wellington), under command of the Swedish King (A Frenchman who has risen to greatness in Napoleon’s army!).

Seriously. But I understand why Anglo people and the Belgian tourist industry focus on the half-assed comeback attempt so much.

a company of the Rocket Troop

I am not going to search the internet for information about them, because the truth is going to be less awesome than the picture of early 19th century jetpack soldiers that I now have in my mind.

Feel free to use the same image at Bladensburg and Baltimore…

The truth was pretty awesome; plucky Mysoreans nearly saw off the East India Company with innovative iron-cased rockets, which so shit the British up that they tried to copy the technology. The army was reluctantly involved and didn’t manage to replicate the effectiveness of the originals (a pity because they had the potential to replace artillery in some instances and save lugging cannon all about the place) but the navy took to them very happily and used them to upset the French navy so badly that they officially called the bawwmbulance about their use.

and that if you examine the social change of the subsequent 50 or a hundred years in the nations of mainland Europe, you see the indelible mark of Napoleon’s France upon them.

Certainly, I’ve always felt conflicted between my pacifist instincts and the spread of ideals of the French Revolution at the point of a gun.

and their rival’s game Waterloo

I liked the one with the wooden blocks, I think called Napoleon? I seem to remember it was fairly easy to learn so maybe it wasn’t super hardcore but the way fog of war was handled was an excellent breath of fresh air from the usual board game conventions.

Also curious did anyone else here ever play Napoleonics with miniatures? That was crazy. People passed around a thick stapled stack of photocopied rules that came from who knows where. Thorough detail though.

I haven’t played it, but I’ve read about it. I like the idea. 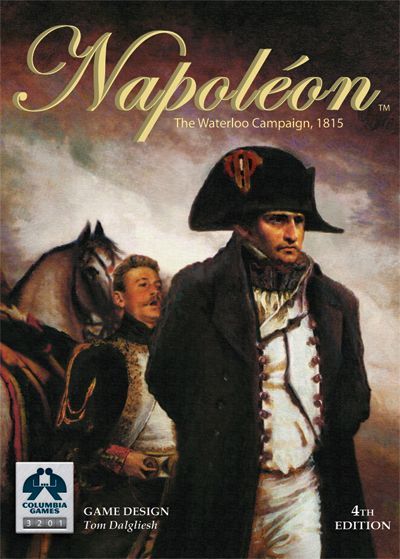 On June 18, 1815, one of the most decisive battles in military history was fought in Belgian fields twenty miles southeast of Brussels. Within a short 100 days, Napoleon, former emperor of France, had returned from exile on the island of Elba, again...