Illegal "Warranty Void If Removed" still ubiquitous: they're on the Xbox One S

I wish that there were more control exercised over the practice of just brazenly claiming things without the slightest legal standing(or directly contrary to what the relevant law states).

Whether it’s the warranty stickers, boilerplate contract language, terms of service and EULAs, there is effectively zero downside to making expansive claims(severability, aw yeah!) and every person you mislead or intimidate is a win for you.

Having the legal protection is obviously better than not having it; but at a population level a legal protection you can lie about without consequence can be driven dangerously close to irrelevance in practice. That being the case, it’d be nice if a law doing something like governing warranty standards also forbid misrepresenting the state of the law.

In Quebec, the consumer protection law specifically states that a warranty doesn’t depend on sending a registration card. All you need is the receipt.

I’m going to print “Warrant Void If Removed” on sticky tape and put it on my front door, that way if LEO’s arrive and see this: 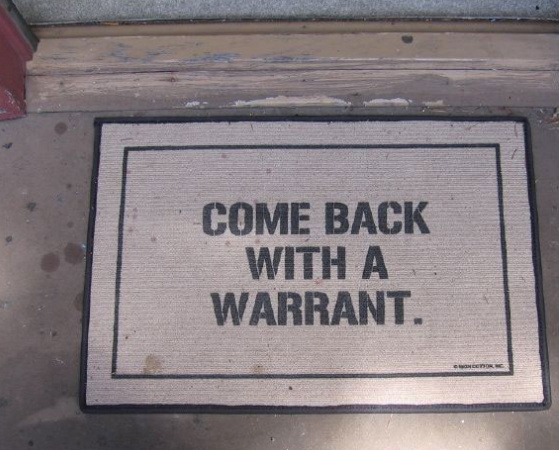 Then there is no way they can do this: 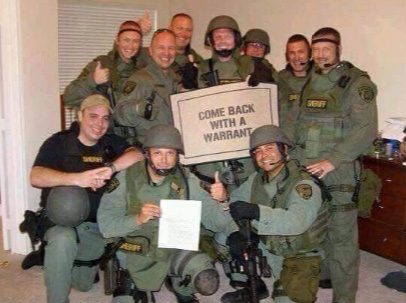 Nah. They’ll just do this 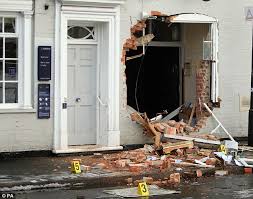 Copy that - stringing it around the entire property.

I regularly see dump trucks zooming around town with stickers reading, “Stay back 200 ft - not responsible for damage.” I hope I never need to test my theory, but I don’t think that sticker would hold up in court. Companies put all kinds of things on products, and they’re not always exactly true.

Also classic, and have no actual legal standing: businesses that put those email disclaimers at the footer such as “If you are not the intended recipient you are notified that disclosing, copying, distributing or taking any action in reliance on the contents of this information is strictly prohibited.”

Those fill me with an irrational, visceral, loathing.

I haven’t been in the position of getting anything juicy by mistake; but I think that disseminating it as widely as possible would just be a reflex response on seeing that bullshit.

I got a real bad temper.

I haven’t been in the position of getting anything juicy by mistake; but I think that disseminating it as widely as possible would just be a reflex response on seeing that bullshit.

I would get them in my work email because my employer and another company they worked with used the same first initial lastname userid scheme. So I kept getting stuff meant for sameusername@othercompany because the sender on my side of things was too stupid to pay attention even after told multiple times to quit sending me stuff I shouldn’t be seeing.

That’s an unsecured load violation. They’d need an explicit exemption from basically all the road laws if stuff’s going to fall off their vehicles while moving at speed.

And seriously, if they’re going to try that song and dance in my town, I’d have half a mind to make artisinal boards full of rusty nails for popping truck tires, sold with a sticker that says “not responsible for shredded tires.”

I saw a photocopied notice posted in the window of my local grocery store claiming they had no liability in the case of an unsecured shopping cart damaging a vehicle. I wondered to myself at the time if this was actually true or a similar legal bluff to the warranty void stickers.

All I know is, I want to ram shopping carts into the vehicles of whichever assholes think it’s even remotely acceptable to leave carts sitting around in the middle of parking spaces. I hope those lazy fuckpusses all die in a fire.

You might wipe the smiles off their faces (probably not, with a good enough [expensive] lawyer, these terms are subject to change at any time)

@LDoBe Your dream is possible with explosives and a crazy custom-built real-time GPS tracking OS (not following you, just your pattern).

@Daneyul Hate to inject logic into it, but you can tell from the window on the left that they knocked down (and how) the door to the right-side apartment.

@Boundegar I once had a rock fly out of a truck on the highway and shatter my windshield at ~100mph. He was going the other way. It traversed about 10 feet over the centerline (they could have killed a child!). I didn’t have time to turn around and chase him down, and didn’t relish the idea of fighting some burly trucker. What that sign really means is “fuck you”.

Police reported three dozen cheerful bystanders, yet no one claims to have seen who did it.

You forgot the title text:

Police reported three dozen cheerful bystanders, yet no one claims to have seen who did it.

You know, in a slightly better administered world, the FTC would send the violators a threatening letter instead of just making press statements.