Images from the Bladerunner model shop

The Tyrell Corp building in that second photo is, or was, on display at the Museum of the Moving Image in NYC. My toupee did a flip when I saw it.

Didn’t it burn down shortly after or even during filming? All those little lights were fiber optics leading to really hot lights underneath the structure which ultimately set it on fire.
I’ve got to find that passage in the Making Of book of Blade Runner I’ve got at home but forgot the title of…

Man, these images are incredible.

This must be the guy who put patterns from Conways game of Life in the illuminated windows of buildings.

Supposedly there’s a Millennium Falcon in there, as well (I’m thinking it was that specific building).

The sushi place reminds me, if the underlying premise is that the animals are gone, where did the sushi come from? I figured that only fish were left, and maybe they had to grow them in tanks.

And while we’re on the subject of Blade Runner, I’m somewhat skeptical about Deckard’s narration being added as an afterthought. Watching the director’s cut(s), it’s really weird without the narration. For example, Bryant just sitting there breathing and looking at Deckard for no particular reason, where the narration (about Bryant) would have been. The reason I’m not totally skeptical, is that maybe they re-edited the film (i.e. visuals) to fit around the narration, and the result was the only available footage they had to go back and cobble together the director’s cut(s).

Here’s some photos of it at the museum: 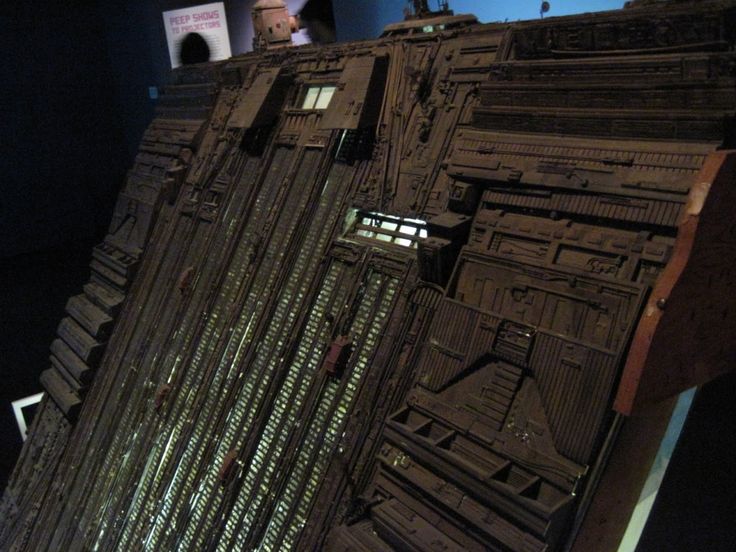 This Pin was discovered by Thomas Cherry. Discover (and save!) your own Pins on Pinterest.