In a challenge to Google, Microsoft is adding ChatGPT to Bing

Originally published at: In a challenge to Google, Microsoft is adding ChatGPT to Bing | Boing Boing

I wonder why Google didn’t try to license the technology before Microsoft did? It could be that Microsoft’s $1 billion investment in OpenAI back in 2019 gave it first dibs. Or it could be that Google has a similar technology that it’s keeping secret.

I recall that Google is the company to announce transformer that GPT-3 is based on, and it indeed has something similar built in-house. Perhaps there’s no point licensing what they already have.

Guess it makes sense for the pair. Microsoft has the money, and OpenAI needs it to keep ChatGPT funded. Badly.

There are Firefox/Chrome add-ons that add this functionality to numerous search engines, so you don’t need to resort to using Bing. eg: GitHub - josStorer/chatGPT-search-engine-extension: A browser extension to display ChatGPT response alongside Search Engine results (I haven’t tried it though).

That would be my assessment of ChatGPT too “yeah it’s around about as useful as Bing”.

Great! Now I’ll get one authoritative incorrect answer instead of ten.

How is this going to tie into Bing’s penchant for providing hardcore pornography as a result for nearly any search?

For anyone wondering just what ChatGPT could do for an internet searcher:

Three weeks ago, an experimental chat bot called ChatGPT made its case to be the industry’s next big disrupter. It can serve up information in clear, simple sentences, rather than just a list of internet links. It can explain concepts in ways people can easily understand. It can even generate ideas from scratch, including business strategies, Christmas gift suggestions, blog topics and vacation plans.

This also stood out:

No company is invincible; all are vulnerable,” said Margaret O’Mara, a professor at the University of Washington who specializes in the history of Silicon Valley. “For companies that have become extraordinarily successful doing one market-defining thing, it is hard to have a second act with something entirely different.”

Facebook/Meta has entered the chat

Yeah, I use Bing only when setting up a new computer, which made me wonder why MS doesn’t install other web browsers like it did during the antitrust litigation days? Did a quick search and the final verdict didn’t require pre installing competitors software:

On November 2, 2001, the DOJ reached an agreement with Microsoft to settle the case. The proposed settlement required Microsoft to share its application programming interfaces with third-party companies and appoint a panel of three people who would have full access to Microsoft’s systems, records, and source code for five years in order to ensure compliance.[28] However, the DOJ did not require Microsoft to change any of its code nor did it prevent Microsoft from tying other software with Windows in the future.

I was using Bing indirectly with Duck Duck Go. Noticed some odd results so I’m back with Google. I do use Bing with Windows 10 but that is on a separate laptop from my normal Linux. I’ll be dragging it out in a couple of months to do my taxes.

It can even generate ideas from scratch, including business strategies,

As someone who spent 25 years in AI, I take strong exception to this characterization by the Times. This is unequivocally false.

The whiz bang AI chatbots and art generators we see now are not creative. They are not creating or synthesizing new information. They are elaborate statistical models that are averaging all the existing art/words currently in the world. They’re more like the median of all previous creativity, rather than creating it.

We may never get to the point of AI being truly creative, and characterizations like this serve to mislead the public about the state of AI technology and research. It’s doing some neat tricks, but it is not on a road to simulated human intelligence. Let me restate that to be super clear- current AI algorithms can not lead to general intelligence. They are not even on a road that might lead to that ballpark.

I wish major news outlets like the Times understood this so they would stop misleading people about what this stuff is and the role it may or may not play in out future. Misleading the general public about technology always ends up in very bad places. 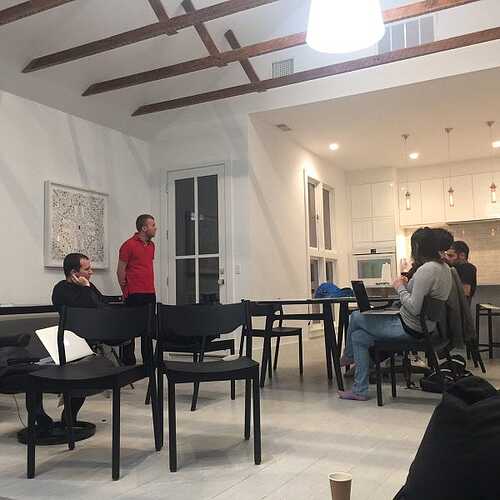 The A.I. has learned how to tell you a celebrity's net worth

Read to the end for a good meme

In my humble opinion, they are creative. Depends on how one defines the term. When you push the button, something exists that didn’t exist before.

How is this going to tie into Bing’s penchant for providing hardcore pornography as a result for nearly any search?

I was using Bing indirectly with Duck Duck Go. Noticed some odd results so I’m back with Google.

In my humble opinion, they are creative. Depends on how one defines the term

You are certainly entitled to your opinion. All the experts in the fields of AI, psychology, and neuroscience disagree with you.

Help me understand. I have here a lovely sonnet about paper clips, written by someone or something. Was it not created?

No, it wasn’t. What the algorithm did is take every single thing ever written in the world related to your seed phrase, and averaged them. Of all the relevant things in the world, which word most often comes first? What word is most commonly placed after that? And so on.

That is literally all these tools are doing. The details are way more complex and not easy to explain to a lay audience, but that’s the gist. It’s a very neat trick, but it is a trick. It is not creation of an original idea any more than ELIZA is a trained psychotherapist even though she asks a lot of the same questions they do.

The problem, as is often the case in a deep technical topic like this, is that people are going to argue about the definitions of “creation” and “creativity”. You are using a colloquial definition that is very very broad, thus can be easily be bent to fit how you feel this all works.

Maybe another metaphor will help. When you type 4+4 into a calculator, is the calculator being creative when it gives you that answer? How about computer code that calculates prime numbers, including ones nobody has ever seen before. Is it being creative in producing those numbers? No, it’s just math and an algorithm.

Your poem was just a very complicated formula punched into a very big calculator.

Seems to me you’re saying that the experts’ non-colloquial definition of “create” is limited to things that only a brain can do. If so, I agree with you by definition. My unschooled point of view is that there isn’t something special about a brain that can never be simulated. Is a brain not fundamentally deterministic?

I think the point is that what GPT is doing is not what brains do, at all. GPT has no understanding at all of the meaning of any word that it uses, just what statistically comes after it. That’s not creativity.