Ew. The bit about Zelda is a total distraction. They’re proposing to lower your boss’s tax rate to one-half of yours.

What? The boss is too damned high.

My question is how does a political party rate a .gov domain?

Apparently they both have one:

It’s the House caucus (is it time for a race?) rather than the party as a whole.

The Democratic Party caucus appear to actually use dems.gov

In any event, progressive taxation is the only fair taxation, and only if the top income earners are taxed at at least 50%.

I was tickled by how the posting contradicted itself, first saying

The last major reform to the American tax code was signed into law in 1986.
It’s been 31 years, and our current code is far beyond repair.

In other words, “taxes needs to be modernized every so often” (with which I agree). Then toward the end, the article says

“Permanent” tax reform? No, it’ll just get out of date like everything else.

Unless they think they’re so clever they can create a tax structure that will never need modifying, but I don’t think that’s why they included that word; I think they just wanted to put in a dramatic, emphatic word like “permanent” that will make their fans get woodies and go beat up chipmunks and girlfriends. The word “absolute” would have served their purposes just as well/badly, as would “bitchin’” and “kick ass”.

This is why I see everyone panicking over a few not great years on the part of nintendo and just shake my head. THat company takes a longer view than the current quarter or even single year. Nintendo will probably be around when my niece’s children have gone grey.

Nintendo just subscribes to the Disney school of false scarcity in an age where you cannot create a false scarcity of media. Both markets are saturated with great content, so withholding your product is not a good business plan outside of getting die hard fans to pay for your products.

What does Legend of Zelda have in relation with US taxation;

-created, distributed and sold by a massive foreign multi-national corporation
-most of its profits go over seas out of the US
-product producer used is massive wealth to lobby the US government for incentives and advantages.
-created using over seas labor
-nearly all profits go to a rich few
-rich few barely taxed on those profits

You know maybe they got something here.

So… Some shitty intern wrote some crap SEO copy? Is that the story?

I also like the way the ‘comprehensive’ reform to presumably replace the current code (since that one is apparently ‘beyond repair’) is explained to voters as a series of separate measures, each apparently totally unconnected to the others.

And you garbled the word ‘tweets’ in the first paragraph.

Both links are the same.

Is that what the GOP was trying to say about Zelda?

I thought “twetes” made for a nifty pejorative – a refreshing step beyond “it’s twitter 'cause they’re all twits lol”. Reminiscent of “sweat” or “testes”.

As for the article, I recall how 27 years ago David Brin foresaw the need for automatic delays in postings. An idea whose time has surely come.
http://www.evertype.com/misc/emilypost.html

My great-great grandmother used to tell me stories about how her and her siblings would finish up cleaning the hog pen and chopping wood as fast as they could so they had a few minutes to play Donkey Kong before dinner. Only what they called Donkey Kong was actually peeling a giant bucket of potatoes.

At this point most of the Republican Party is reactionary rather than conservative.

Conservatives can cope with progressive change, they just want it to happen slowly. Reactionaries want any change do be undone and things put back to “how they were”*, see groups like the neo-confederates as an example .

* “how they were” doesn’t have to bear any resemblance to history.

I don’t know about the US, but at that time in the UK some of the older conservatives were practically socialist in comparison to Maggie Thatcher and (later) Tony Blair.

Just for the record, Nintendo was originally a playing card company and still is, to a much lesser extent. 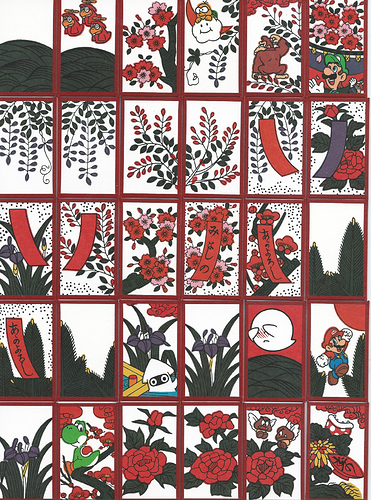 I haven’t spoken to that particular friend since the end of the last Millennium. He was a Reagan Republican (and fan of Thatcher, IIRC), and an intelligent, thoughtful fellow … if you don’t consider that an oxymoron. I should look him up and find out if he has devolved along with the Republican Party for the past 30 years, or if he reviles Trump and the current GOP as much as he should do.

Since Nintendo heavily monitors how their IP is protrayed online, I wonder if Nintendo was the one to get the GOP to delete their posts.

Is it possible for Nintendo to sue them for defamation (or something like that) for politicizing their IP without permission?