I love you guys sometimes.

She believed that Bush et al wouldn’t lie. Then when it came out that they did indeed lie, she doubled down. 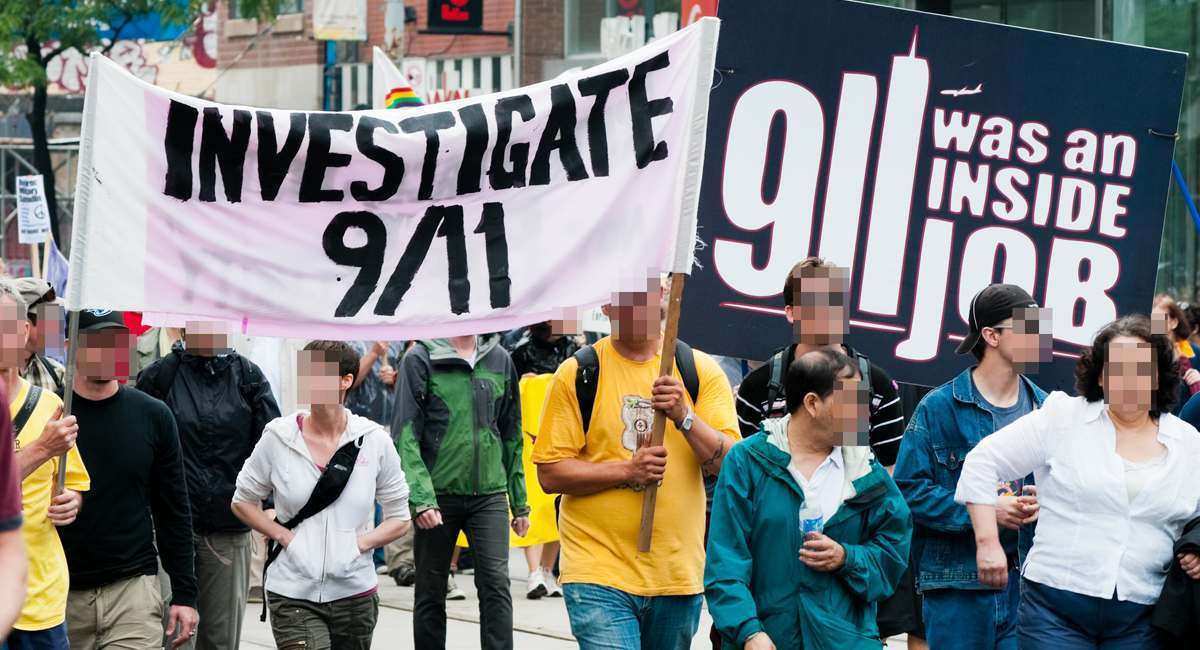 We sat down with Charles Veitch, who got on the Truther bandwagon early and became one of its most popular advocates ... only to turn away from the whole ridiculous conspiracy in the most public way possible.

This was a great article about how conspiracy theories can burrow deep into your identity and even when you’re proven wrong it’s hard to give up this idea that has in some way defined you.

This was a great article about how conspiracy theories can burrow deep into your identity and even when you’re proven wrong it’s hard to give up this idea that has in some way defined you.

I’ll add this delightful video about conspiracy theories because it really humanizes the people who have them and points out that they’re tied to evolutionarily positive traits. I go back to it occasionally when I get a bit ranty about people believing in such things. It helps me keep perspective.

I tend to lose friends to wives.
Not like, “I’m married now, and I just don’t have the time” or "Someone has risen above you in the best friend category."
More like, "I can’t be your friend anymore."
The worst was being invited to the wedding, then having it dropped on me during the ride to the airport the next morning.

I don’t think it’s an issue with women in general, either. Aside from this one particular friend, I feel I’ve had closer friendships with women most of the time.

What’s it like being so hot they just can’t trust themselves around you? Vicarious minds want to know.

Huh? I always assumed it was the wife’s decision.

Perhaps I’m being too judgmental, but I find that totally bizarre, on the part of both your (ex-)friend and the wife. “I can’t be friends with you anymore”? What, you’re not ‘allowed’ to choose who you wish to hang out with? Fuck. That. Shit.

And no matter who it’s coming from, that kind of controlling behaviour is scary, perhaps even bordering on abusive… and a bad, bad sign about the future of that particular relationship, in my experience.

I feel the same way. It really felt bizarre to have that bomb dropped.

I assume I’m a good person in general. I sometimes wonder if it’s something I’m doing wrong and I don’t see it in myself, like a horn growing out of my forehead.
But then I think about how I’ve managed to grow some very close personal friendships in my life and realize maybe it’s not just me.

Oh and @bibliophile20 , just walk away, man. Walk away. Don’t let him occupy more space in your head than he already has. Sure, it’s sad, and you can regret the loss of 8+ years of friendship, but sometimes just turning your back and leaving the toxic ones behind is the best option. Besides, it seems like he was wearing bit of a mask for most of those eight years… and now you’ve seen what’s behind the facade, do you really want to go back for more?

But then I think about how I’ve managed to grow some very close personal friendships in my life and realize maybe it’s not just me.

Then it’s not just you!

Honestly if somebody tells me they’re uncomfortable about me having somebody else as a friend, and that friend isn’t saying bad things about anybody else…then I’m siding with the one who’s NOT disparaging somebody else behind their back. All my favorite friends have all kinds of weird friends in their circles. The best have the weirdest and the fact that they can adore people that I don’t just makes them more awesome.

I get that we can fall in love and sometimes we get caught up in things, but that should be a HUGE warning sign to your friends, and if anything I’m more worried about their new relationship than anything else. That’s just not healthy.

If that’s you in your avatar pic, nup, no horn dude!

and yeah, I reckon this one’s much more about the wife and character of your friend than about you as such.

Oh! Question…do you happen to be a bit of a caretaker type? Helping people who are a bit more fragile, always being there no matter what, the ‘rock’ of your crew, that sort of thing?

Because that’d be an interesting clue, and if so I’m seeing some parallels!

Well, she sounds like an absolute fucking nightmare. I would have said ‘repent for what, precisely?’, given her maybe 30 seconds to apologise for saying such an unforgivably cunty thing or moderate her comment in some way - which I very much doubt she could or would do - and then probably never spoken to her again if I could avoid it.

'Cos you just know that if she’s saying such things about Jim, she’s also more-than-likely thinking similar things about you, if not also voicing them to others.

just walk away, man. Walk away.

I already did. I’m just having that l’esprit d’escalier moment in regards to him in the aftermath of the RNC’s formal nomination of the Short-Fingered Vulgarian.

Perhaps.
I know I tend to be a “pleaser” and often struggled against narcissists when I was younger. Sometimes I’d win, sometimes I’d lose.
I know I have to spend a great deal of energy fending off those types, but I’m getting better at guarding myself.

I don’t know about being a rock…but I certainly identified with Dumbo or Rudolph/Hermey as I was growing up (I was teased as a kid, abused as a teen), but now I do find myself helping out young people with support and advice. I did have to fight my own battles, because nobody else was helping.

I know you think you’ve walked away, but to me, what you’ve said about having to fight a hard urge to call him indicates that you’ve not fully walked away. He seems to still be inhabiting more of your brain than he’s entitled to. I don’t mean any of this condescendingly, so I apologise if it’s coming across that way.

Oh yeah, I’ve got a couple of friends that share some traits with you and have some similar issues!

It’s NOT you, it’s the fact that you have people that gravitate towards you that aren’t as emotionally strong/independent and they’re attracted to what you offer. When they end up in a relationship it’s as often as not with somebody who has a a slightly dominant personality, and not all of those people are good about sharing.

My (totally amateur!) suspicion is that you threaten their authority and power, and that scares them so they try to nip that threat in the bud.

While not nearly as dramatic, I’ve struggled with a particular friend for years because something in me just isn’t ready to let her go. I’ve known her since I was 11 and she became my college roommate. We joyfully watched the election returns come in for the first presidential election in which we were able to vote, Bill in 1992.

But she slowly, slowly drifted to the right. Through our later 20s and 30s, while our personal lives continued to follow the same path (marriage, children), it became clear our political paths had drastically diverged. We lived in different cities and conversations with her became much less fun. Someone with whom I could discuss anything was telling me how Bush II wasn’t so bad and there was also a lot about Jesus in there too, so I cut the cord.

Then, just over three years ago, my mother, a beloved elementary school teacher, was very unexpectedly diagnosed with pancreatic cancer and died 5 months later.

This friend reached out to me. She was one of the few left in my life who remembered me with my mother through childhood and adolesence. We laughed, we cried.

We re-connected. We don’t talk about politics anymore, or religion. One could argue our friendship is more superficial now, but two days ago she called and told me her husband is now in re-hab and hasn’t been paying the bills and she has two kids, etc. Again, we cried and we even laughed a little.

I don’t know. In @bibliophile20 case, that’s beyond the pale. You guys had clearly drawn some boundaries and this person napalmed them. Sometimes there may simply be betrayls that cut too deep to recover.

But in my life, I’ve not had such dramatic endings, closer to slow slouchings, which makes it difficult to know when to excise and when, and how, to maintain.