Intel's Inside the Trump Administration

This is a lot of smoke and mirrors.

I own stock in Intel (INTC), and this plant has been in the works for a while (almost five years). Intel’s PC sales and mobile chip sales have been flat for the past couple of years, so there hasn’t been a lot of push to move forward with a plant that has to be retooled every 6-24 months depending on chipset advances. The company reports and market analysis was pretty clear on this.

This also would not have been a plant built overseas, regardless. Primarily, Intel is very protective of their production operations, and industrial espionage is de facto in East Asia. We are in a race with China when it comes to computing, and it’s not just supercomputers. As a secondary issue, quality control tends to suffer in manufacturing environments that East Asia offers (specifically for the manufacture and production of chipsets), whereas the US southwest is surprisingly amenable both from a climate and business perspective. As a tertiary issue, this plant is likely going to replace a nearly-obsolete plant, so we’ll see about the net jobs.

Don’t get me wrong. It’s all generally good, but the clear indicator on the overall benefit of this is that the stock remained flat on the announcement. This usually means that all of this was already known and priced-in to the shares (i.e., it was happening no matter who was president).

Wow! 3000* jobs! That’s almost one tenth of one percent of the working age population in Arizona!

But at least we got that sweet tax rev … wait, what’s that you said?

A humanoid Komodo dragon sits during a meeting with Chief Executive Officer of Intel Brian Krzanich in the Oval Office of the White House in Washington, U.S., February 8, 2017. REUTERS/Joshua Roberts

The shiny object got his attention… 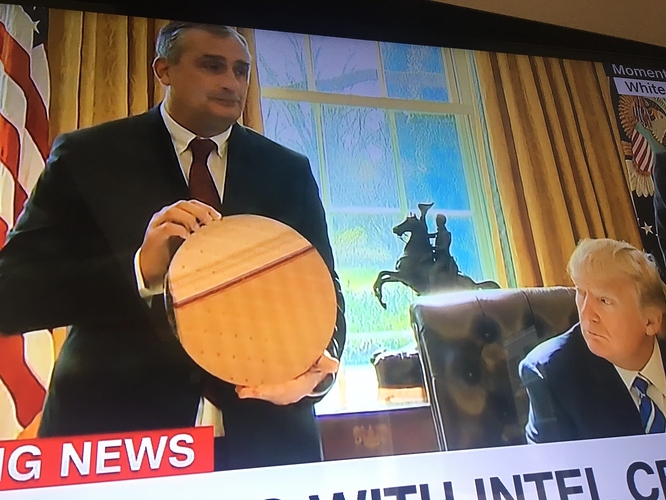 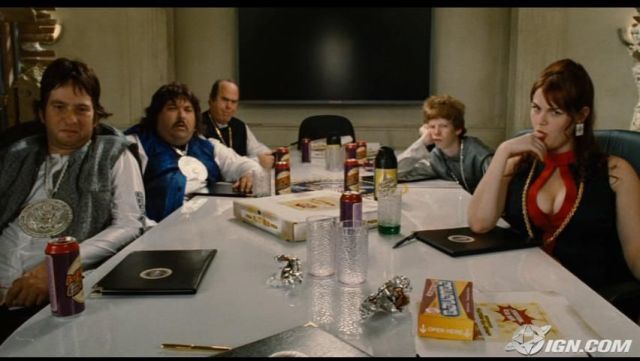 Which is what you’d expect. It’s announced as the “completion” of a plant? That means it’s been in the world for a while. And would have happened anyway.

Rumors are bubbling that Intel is getting a little touchy these days. What with AMD’s good press over their coming product releases. And Intel’s weak position in GPUs as those become a massively important growth sector for chips.

Sounds like a misguided attempt at an easy PR win. These sorts of things tend to backfire lately.

Also it looks like Intel does manufacture in China and “assemble” in South East Asia. Though what I can’t tell you. Most of its in the US.

AMD is currently built by Global Foundries. Also mostly US. And pleasantly a lot of East Coast. But recently there are reports of a new deal with Samsung (likely mostly Korea).

The GLOBALSOLUTIONS ecosystem collaborates with select partners in all aspects of design enablement, turnkey services, OPC and mask operations.

The following is a list of Intel's manufacturing and assembly/test sites. Processors are manufactured in semiconductor fabrication plants ("fabs") which are then sent to assembly and testing sites before delivery to customers. Approximately 75% of Intel's semiconductor fabrication is performed in the USA. The Intel Fab 3 building is a wafer manufacturing plant located in Livermore, California on North Mines Road. The plant opened in 1972 and began making wafers in April 1973. Fab 3 closed its d...

Tellingly AMD has a deal to co-develop or some such chips in China. But this is not Asian production of AMD CPUs. It’s a project to design and produce separate chips of various sort for the Chinese market. As China apparently wants to built it’s own domestic competition. Soviet style. IIRC Intel has made similar moves, China’s a big market.

So YEAH. Not the sort of manufacturing that moves to Asia.

My guess? Intel sees Donald as a mark that can be played. Let him pretend a little, and they can use him to get away with whatever they want.

I’m boycotting Intel when I use my mobile phone. I’m investigating https://www.packet.net to make my cloud work ARM too.

Intel should take a long hard look at the history of companies like I.G. Farben.

I own stock in Intel (INTC), and this plant has been in the works for a while (almost five years).

Are they finally pulling the trigger on 18" wafers?

Looks like someone’s angling for the lucrative Muslim registry contracts. IBM didn’t get where they are by sitting out WWII.

Where will they get enough guacamole for all those chips?

Yeah, but they want those sweet, sweet Carrier tax breaks.

Note that the fab in China is a 65nm plant. 65nm was last used for Intel CPUs a bit over a decade ago(‘Cedar Mill’ Pentium 4s and ‘Presler’ Pentium Ds; both January 2006, not sure when they went EOL). Intel fabs other stuff on the older process nodes; but some combination of industrial espionage concerns and Wassenaar Arrangement compliance(the stuff of note to Intel looks like it starts around page 68; with a specific note on lithiography processes of 45nm or less on page 69) makes it relatively unattractive, and potentially impractical, to offshore high end semiconductor processes.

Plus, this aspect of semiconductor production is fairly heavily automated(at least in part because humans are dirty and imprecise, not because they are expensive; though the humans that are involved tend to be high skill specialists). Intel has been somewhat petulant about the ‘no, just dumping assorted nasty solvents into the water table is not allowed’ issue(back before ‘silicon valley’ mostly produced dumb mobile apps; it chalked up a truly impressive collection of superfund sites because semiconductor fabrication is chemically quite unpleasant).

“Assembly” or “packaging” refers to the process of taking a diffused wafer(like the shiny object in @crenquis’ post; it is something of a tradition to wave a few of those around during announcements of new products/processes/fabs, especially if you are moving to a larger wafer size, probably 300mm to 400mm under current conditions) and cutting it up into individual dice; testing them; and making the appropriate connections between the die itself and the package for sale(wire bonding to a mechanical carrier and epoxy encapsulation; or flip-chip BGA to an interposer; or a variety of other variants as thermal, pin-count, and customer requirements warrant).

Intel does most of their diffusion in the US, with the one facility in China, and some in Israel and Ireland; GlobalFoundries(formerly AMD; with some aquisitions from Chartered and IBM) has fabs in the Germany, the US, and Singapore); both do a lot of packaging and testing in Malaysia; but neither does any diffusing there.

As for Fab 42, Arstechnica has a good piece on it. It was announced back in 2011; largely completed; but then mothballed; and is now being reactivated with plans for 7nm fabrication. Team Intel appear to be willing to play ball in terms of pretending that they are just now deciding to bring back American Jobs and American Greatness(probably in hopes of some sweet tax breaks); but they didn’t start work on this thing 6 years ago because they were planning on teleporting it to China.

Their willingness to play cynical PR games isn’t impressive; but the only way this plant was going to be anywhere else is if they had just decided to abandon the already fairly expensive construction done so far; and given the distribution of their fabs, they don’t seem to be in any desperate hurry to move enormously expensive capital equipment to higher risk areas just to get incrementally cheaper employees(even among their non-US plants; you don’t exactly go to Israel for cheap labor; and Ireland is a good place to play tax dodging games and do things that need EU access; but also isn’t an especially cheap source of skilled labor).

The Arizona plant is a sort of clone of Ronler Acres, which is catty-corner from my old apartment complex. When they were putting it together there was a gi-fucking-enormous crane hanging over the place: 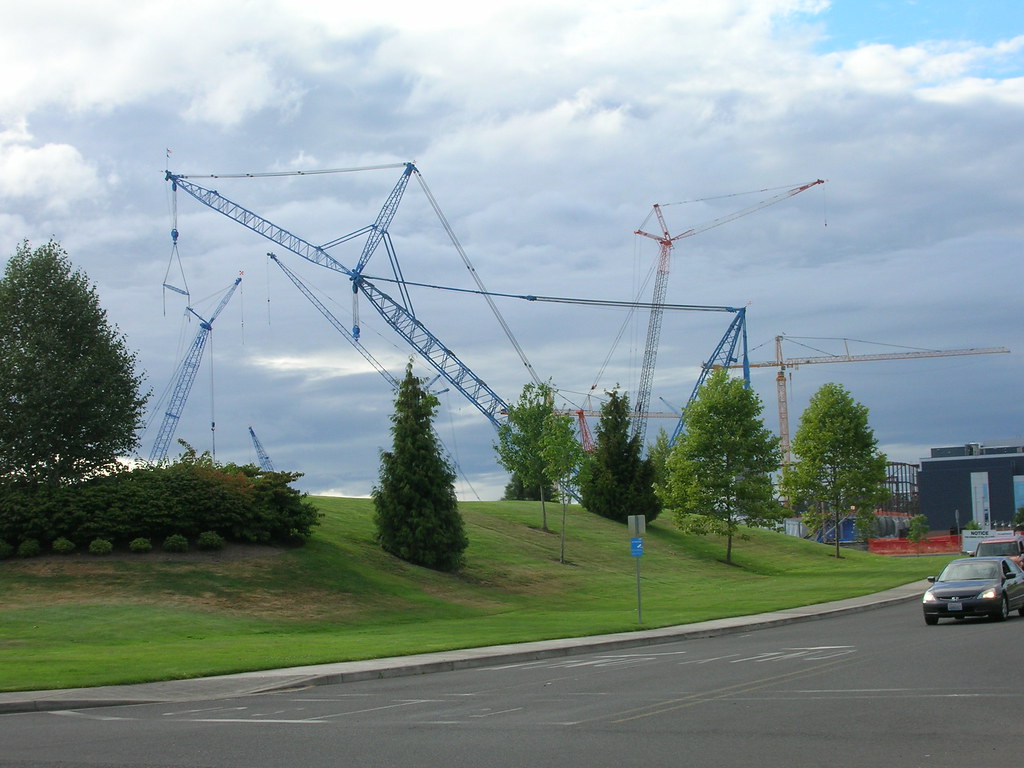 However, chip industry analyst Jim McGregor said the changing political climate in Washington had nothing at all to do with Intel’s decision to finally move ahead with the idle factory in Arizona.

“Intel’s fab strategy has been set for at least a decade,” said McGregor, who works with TIRIAS Research in Arizona.

I own stock in Intel (INTC), and this plant has been in the works for a while (almost five years).

Then this announcement falls right in line with all the other amazing job creation announcements from the White House to date.

Of course, not all Intel manufacturing facilities are as impressive as Ronler Acres . . . 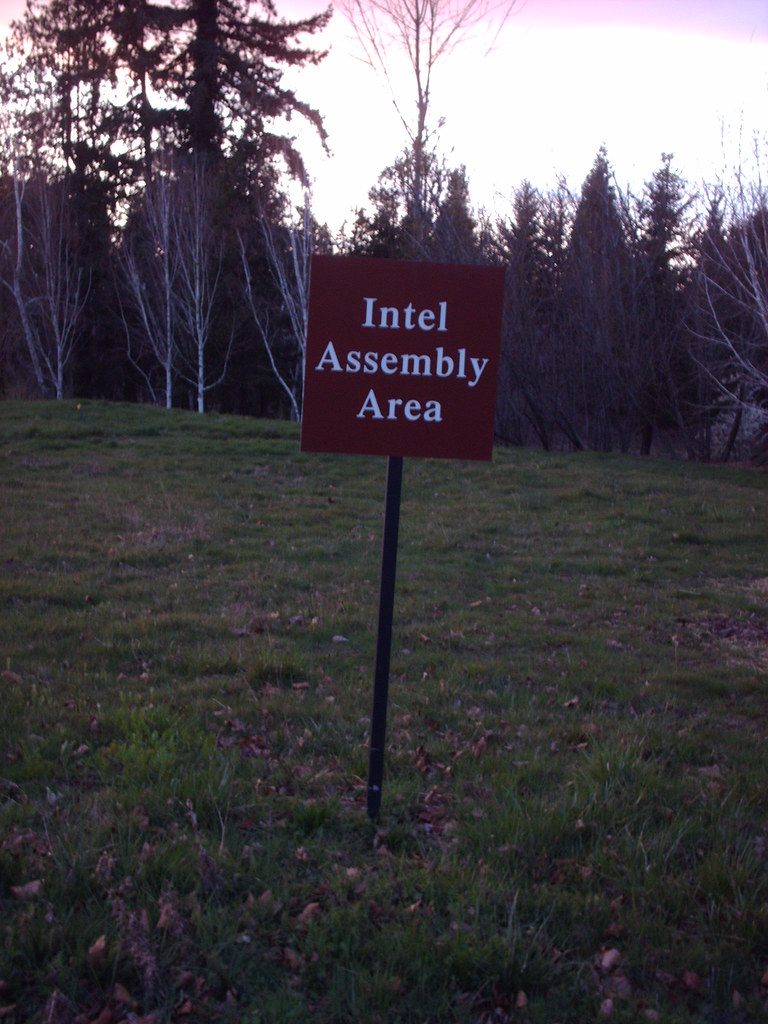