It's unfair to compare Rowling to Lucas

Yeah, Dumbledore being gay and the house of Harry’s son doesn’t re-cast the story told in any new negative light.

I cant years later decide if the Dumbledore is gay revelation is cool as in so normal why brother mention his preferences when everyone inside the story knows but it doesn’t contribute to the storyline, a non-flaming person(not all gay people want to be superfruity 24/7) who happens to be gay. It still seemed rather expedient once the final was already at press, though I wonder if the US publisher, Scholastic would have taken the risk had Dumbledore come out in canon.
I am inclined to agree with @beschizza, it is probably as much how we got the information, why couldn’t that have been at least hinted at if it was part of Rowling’s character outline while writing the books.

The problem is that Lucas does his reconning on the products themselves (Han shot first), not in a tweet that’s easily ignored.

But how boring to have Harry’s son sorted into Gryffindor. It would have been MUCH more interesting for him to become Slytherin. He can then either go bad and be the NEXT dark lord, or can be THE ONE to heal the Gryffindor/Slytherin split.

Uhhh… when reading the final Potter book, it seemed to me like it was being implied very strongly that Dumbledore is gay. It makes total sense for his character.

As for Dumbledore not acting flaming 24/7, I don’t think we really can say much about that (but now I will proceed to do so!) Given the vast differences between wizard and muggle cultures generally, I think it would be fair to suppose that gay wizard culture has its own set of norms/stereotypes/tropes which are distinct from muggle gay culture. Dumbledore may or may not conform to those social expectations, but we wouldn’t know, because it is not explicitly mentioned, and we are all presumably muggles.

I don’t like the way that she hasn’t left the works to stand but instead tinkers with them through the medium of off-hand comments and tweets. I note - with some cynicism - that she waited until peak book sales and film deals would be relatively un-threatened by the revelation before revealing Dumbledore’s sexuality. Much as I think it’s a good thing to have gay characters and not necessarily ones that are all Priscilla Queen of the Desert, I don’t think retrospectively tacking the label onto a character really does anyone a favour. If she was serious about it then I’d have thought a youth-of-Dumbledore focussed prequel could explore the character and do this theme more justice. Sure, maybe she just doesn’t want to write it, and that’s fair. But I think the characters should be left to stand as their thoughts and deeds as described upon the page. You wouldn’t paint a masterpiece and then add a post-it note describing the hair-colour the girl should have or stating that you would have added a pineapple and two addition plums to the composition. If you felt really serious about it then you’d have another pop at it and try to address the deficiencies of the initial work.

Lucas’ revisions to Star Wars aren’t bad just because they’re poorly executed; they’re bad because they either are irrelevant and distracting or alter crucial themes and characterizations which made the films good. The most common example is “Han shot first.” By changing that detail, Lucas undercut the edgy, piratical nature of Han Solo’s character. I think the prequels are bad for similar reasons. Adding “midichlorians” contradicted the magical, mystical nature of the Force. Making Yoda into a tiny, wall-bouncing ninja was 180 degrees from his character as the wise, gentle jedi master who scoffed at being called a “great warrior.” We go from “wars not make one great” and Obi-Wan telling Vader that using the Force for destruction was self-defeating to Obi-Wan telling Anakin that his light saber “is your life!”

Rowling’s additions to the Potter universe remind me more of Tolkien (although the scope is different, of course). She has much more room to flesh out the universe, its history (which she is reportedly doing), its future, and other aspects of the time period when Harry and friends leave Hogwarts. I’ve always wondered about what ethical obligations magical humans feel they owe Muggles. Many tried to protect them from being murdered by Voldemort, but there is the same problem that occurs in all superhero fiction - after being saved from the Big Bad,regular people have all kinds of problems that the superhero can fix. For example, can’t a magical healer pose as a Muggle doctor and secretly cure Muggles of diseases and injuries that otherwise would kill them? Many lives would be saved that way. Isn’t there a moral obligation to do so? After all, almost every magical person is at least related to Muggles. Don’t they even want to help their family members? I would love to read about stuff like that.

But how boring to have Harry’s son sorted into Gryffindor. It would have been MUCH more interesting for him to become Slytherin. He can then either go bad and be the NEXT dark lord, or can be THE ONE to heal the Gryffindor/Slytherin split.

Yeah, for all that stuff about how “we are more than just the path destiny chooses for us” it certainly did seem that the verdict in the books and movies was pretty strongly in favor of “those Slytherin jerks simply can’t be trusted under any circumstances.” I’d have liked to see at least one Gryffindor turn evil or one Slytherin (other than Snape) take a stand against Voldemort.

Screw that sorting hat, man. I didn’t even choose a major until I was 19.

It would have been MUCH more interesting for Harry’s son Leia’s daughter to become Slytherinith. [S]he can then either go bad and be the NEXT dark lord, or can be THE ONE to heal the Gryffindor/Slytherin Jedi/Sith split.

There are reports that, when asked to name the protagonist of The Force Unleashed, Lucas wanted to go with “Darth Icky” or “Darth Insanius”. And then there’s the case where, in speaking with John Stewart, Lucas decided that Obi-Wan was from the planet Stewjon – and people apparently took him entirely seriously.

I kind of hope maybe ten years from now, when some distance has been gained, George Lucas writes a thoughtful tome about what it was like to be at the crest of this utter insanity. But maybe that’s too much to hope for.

Considering Rowling has sort of moved on to other things, i.e. books that are decidedly not fantasy, perhaps she will fare better in the decades to come.

It was Leia’s son, not her daughter. 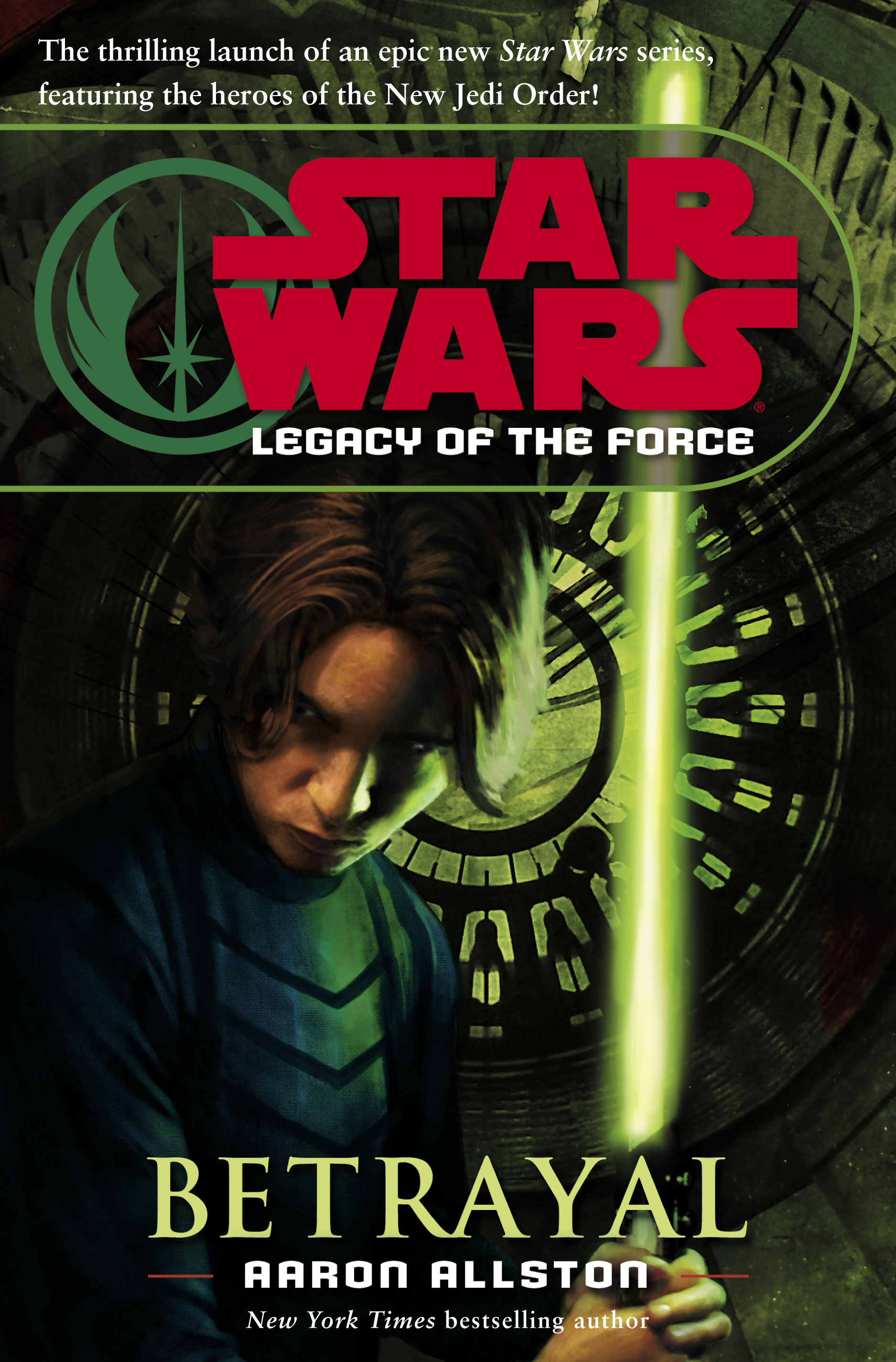 Legacy of the Force

Legacy of the Force, also known as LOTF, is a nine-book series contained in the Legacy era, set five years after the events of the Dark Nest Crisis. It deals with the fall of Jacen Solo to the dark side of the Force, mentored by the returning villain...

Hasn’t the trope always been: http://tvtropes.org/pmwiki/pmwiki.php/Main/WordOfGod ?

It seemed pretty strongly implied to me and my wife when the book was released. Reading about Dumbledore’s “friendship” as a young man made me wonder about it, but when my wife reached the same section and asked what I thought about his boyfriend pretty much sealed the deal, so to speak.

The concerns raised with #2 (adding new details, that do not retcon previous canon)…

The more Rowling enhances and embellishes her Harry Potter universe, the less room she leaves for readers to fill in the gaps with their own imaginations.

…seems to profoundly miss the point that when new details are added, the frontier of gaps to fill expands.

Dumbledore is gay? I guess that means headcon and fanfic about who his boyfriend(s) were, how he dealt with being in and/or out of the closet, what his homosexuality within the wizarding community means. Get how that works?

If this means previous headcanon and fanfic needs rewriting, so be it. That is no different that having to rewrite or retcon headcanon everytime a new canon text is published, or a new chapter is read (wait, Luke’s father is who?!).

No dissing on Priscilla if you please.

The main difference between Lucas’s retconning and Rowling’s retconning, is that you can still read the Harry Potter books and experience them in their original form. I can introduce a child to Harry Potter and have them read the exact same thing that I read 18 years ago, (though it would be inhumane to force them to spread out the series over a decade like I had to). You can’t do that with Star Wars. Anyone who watches the OT these days will always see Han shoot first and force ghost Hayden Christensen at the end. Until Rowling starts literally re-writing the books, she won’t be nearly as bad as Lucas

I have a feeling that the people that would have taken the most objection to Dumbledore’s sexuality were already objecting to it over the whole witchcraft thing.

No dissing on Priscilla if you please.

REALLY!? Is that a very funny shoop, or is that an actual frame?! I’m guessing funny shoop.

The only fair comparison is that the quality of their work dropped sharply after the first three.