Finally someone speaks POWER to TRUTHINESS.

some of what Stewart says is demonstrably wrong (the lab is NOT called the “Wuhan Novel Coronavirus Lab” for example, it’s the Wuhan Institute of Virology.)

I don’t get how that’s even supposed to support his theory. It’s like saying the National Hurricane Center is responsible for creating a weather-related disaster because they have “hurricane” right in their name.

The “lab leak” theory may be plausible but he’s making a terrible case for it.

I think it was 4. Occam’s razor tells me it’s 4: the capacity if humans to do stupid things is unbounded.

Very uncomfortable watching to say the least, unless he was trying out material that just did not work. Or lockdown has really gotten to him.

By the way, also put me down as someone who vastly prefers the lockdown Late Show format, i haven’t missed the whooping, hollering audience one bit.

The two in the middle? How many people haven’t made “poor decisions” or screwed up at work. Sure, most of us don’t work in a building with a bio safety rating. On much more mundane mistakes my perception is the person who made them will often try to cover up the issue and get around it. Who doesn’t know the IT storage engineer that accidentally removed the physical storage assigned to the production database and then tried to undo it without anyone noticing? They all noticed.

“They all noticed” would also apply here. I assume that with the march of technology “studied in a lab” would include RNA sequencing as a matter of course. And when 2019-nCov is then sequenced the natural question at the Wuhan Institute of Virology is going to be which of the coronaviruses on file it’s most closely related to (the answer is RaTG13). A lab accident is plausible a priori, but a lab accident followed up by a successful cover-up would surprise me.

not, it must be said, a high bar to clear

Of course it is feasible that this lab is connected with the outbreak happening when and where it did. But there would have been a pandemic sooner or later regardless, which is exactly why the lab exists.

“it doesn’t matter whether the lab causes or prevents pandemics”

A lab accident is plausible a priori, but a lab accident followed up by a successful cover-up would surprise me.

Yeah, I’ve been thinking about that one, and a successful cover-up would be difficult to pull off. But on the other hand, there would (potentially) be many officials at various levels of local and central government, and maybe even within the institute itself, who might legitimately not know what happened but also have a strong disincentive from investigating too hard. There’s a bit of a difference between having a large number of people actively working together in a complex conspiracy to cover up the truth about an accident, and a large number of people who choose not to look too deep into questions that they might not like the answer to.

Can they even rule out

The whole point of science is that, no, they can not rule out.

It still does not mean that it is probable or likely.

What is likely is that we will never truly know the first cases happened. We can still try, to find the original sources. But we need to be very careful the discussion around it does not go into science denialism once again.

I am 100% sure that Stewart was just having fun with Colbert, intentionally putting Colbert in an awkward position. That said, I do think that in an age of dangerous disinformation, Kaufman-esque comedy espousing disinformation is iffy. That said, Colbert clearly wins in the end and Stewart can’t stay in character when Colbert delivers the final point.

are two radically different things in this context. One of them is basically a totally unsubstantiated accusation of biowarfare, and the other is a plausible (but still unproven) theory about accidental transmission from an infected animal at the lab to a human working there. I don’t hear Stewart arguing for the former.

It’s your headline, but “lab-grown” is the QAnon/“Trump did nothing wrong” framing.

The article I read in Bulletin of the Atomic Scientists was something like
4.5. A virus being studied in a lab and someone performed unwise change of function experiments. to find out what the virus would be like if it made the jump to humans. In a lab where the safety level is lower than that type of experiment requires (the bio safety level), a triple opsie of bad decisions.

Well, put it this way: you don’t see anyone getting excited about disproving the “lab leak” narrative. It’s only ever about what it will mean when this “investigation” proves it was all China’s fault.

There is little realistic prospect of knowing for sure. At best, further investigations would turn up safety lapses that could have been recognised as such before the pandemic (it’s not like someone will go over the whole campus with an electron microscope and find a tiny tunnel behind an RNitA Hayworth poster). And any new answer will involve China, and therefore be rejected by Stewart for the same reason he rejected the last one.

So it doesn’t matter what asking this question could achieve in some fictional scenario. In reality, it’s just a vehicle for bad-faith innuendo, exactly like all those Hillary Clinton investigations, which is why Jon Stewart has so little excuse.

Even the new yorker has gotten into the act. 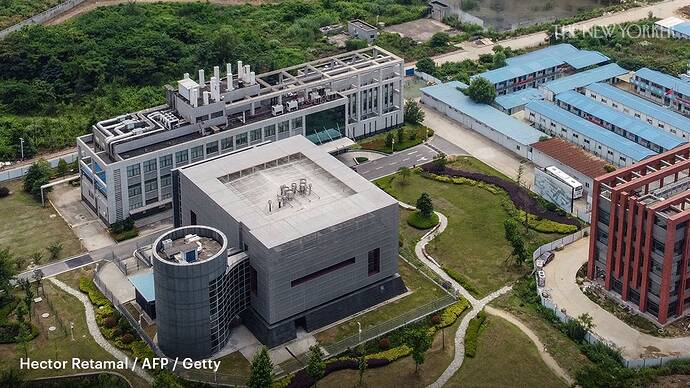 The Battle Over the Coronavirus Lab-Leak Theory

The debate about the origin of the pandemic has become loud, contentious, and infused with politics. We need to find real answers.

New York magazine beat them to it a while back with this ridiculous article by a publicity-seeking author offering … no evidence for his contention:

Stewart’s “argument” is only slightly more convincing. I don’t rules out the possibility of a lab leak, but it would be nice to hear from experts with actual evidence.

At this point I don’t really care where it came from. A year ago, I would have been perfectly happy to push the “Chinese lab” theory.

Because, honestly, Americans don’t give a flying fuck about any problem we can’t point a gun at. If we’d declared on day one that this was a bioterror attack, we’d have have had universal healthcare, half the factories in the country retooled to make ventilators, and testing sites on every city block within 72 hours. Natural disaster, we really don’t really start feeling motivated until we’ve got at least a couple million casualties.

I think it is most likely #2 with a twist. I think a wild game collector caught some bats and tried to sell them to the lab and then sold whatever what left to a vendor at the market there. The collector become patient zero, but doesn’t get sick until they got back home to whatever village or into the back country and probably shakes it off as a common cold. Meanwhile covid carrying bats are being sold as medicine at the market but are all sold before people start getting sick. By the time they start testing animals at the market the bats are long gone.
My second guess is #4 but with less experimentation and more improper handling of samples with the researches treating it as a lvl2 rather than a lvl4 because who wants to get all dressed up and paranoid when dealing with what could be routine sample collecting/analysing. Hell, it is expensive to run the lvl 4 labs and no one wants to be there any longer than they have to. If it did leak from the lab I think it would be from an oopsie, cutting corners type situation rather than a #5 or #6 scenario.

I think he was more encouraging, without saying it explicitly, is that US interests were funding the chinese lab’s research at a high level, meaning millions of dollars.

So if the Covid has any relation to this lab, the US is as much to blame as china. Nobody that wants to blame china wants to hear about that.

It is notable that every other breakout has been traced to patient zero, and the likely transfer point to humans. For Covid 19 we have no such trace, and I don’t get the sense that anybody is working on it.

It’s all pretty mindblowing. The same people who were pushing the idea this was an attack by China early on were also saying not to wear masks and are now saying not to get vaccinated.

Hey, China is trying to kill Americans, but don’t do anything to stop them, that would be playing right into the hands of the liberals!

But fascists don’t feel the need to pick a lane, you are supposed to be able to think multiple contradictory things at once. If you can’t, you are a dangerous dissenter.

The same people who were pushing the idea this was an attack by China early on were also saying not to wear masks and are now saying not to get vaccinated.

Sometimes it’s ok to wear a mask now to protect you from the vaccinated people. It’s only fascism if doctors tell you it’s a good idea.