Judge orders L.A. to build shelter for Skid Row homeless within the next 180 days

Originally published at: Judge orders L.A. to build shelter for Skid Row homeless within the next 180 days | Boing Boing

Kind of blows my mind that Skid Row has been famous as “that part of L.A. where all the homeless people are” for almost a century now and nobody has been willing or able to figure out how to just put the people there into some kind of housing.

I recently came back to L.A. after a long absence and the size and extent of the encampments was really shocking. Downtown L.A.'s Skid Row (the result of a very problematic containment policy from the 1970s) is only the most prominent example in the city. You will find smaller encampments just a block or two away from multi-million-dollar homes owned by celebrities in the Hollywood Hills or Venice or Brentwood.

I only see two possible short- to medium-term applications for these funds, assuming the money is available at all. One is to buy up and re-furbish the multitude of closed and semi-abandoned motels in the city. The other is to construct “tiny house” communities similar to this one previously described on BoingBoing. The latter will have to be built on empty lots in those same affluent communities despite the objections of the NIMBYs, because at this point the homeless will be there one way or the other.

If either of these Housing First solutions are implemented, though, I fear that there won’t be the political will to designate certain sites for particular types of residents with different social support needs. If that doesn’t happen, a lot of the worst aspects of the old dysfunctional shelter system (theft, fights, drug use, psychotic episodes, other disruptive behaviours) will just be replicated.

The net effect for me is that it makes homelessness illegal — but it doesn’t criminalize those affected: it holds the city accountable to failing to building housing for the people it draws in.

“There’s no doubt that in the short run, this will reduce the number of encampments on Skid Row and increase property values,” Blasi said.

Anyone wiling to drop-off a copy of Progress and Poverty or any other texts on ground rents/land value taxation? It seems to me rising land values are the way to pay for this: not that it’s a breakeven proposition but LA isn’t taking it all on the chin either.

Big start would just be sanitary services, bathrooms, clean water. It isn’t that hard, the city of LA has lacked the will [see City leaders] to do anything for 100 years. Don’t hang your hopes on them doing it in 180 days…

I highly suggest this latest column (and everything he’s been writing about this crisis) that was published today: 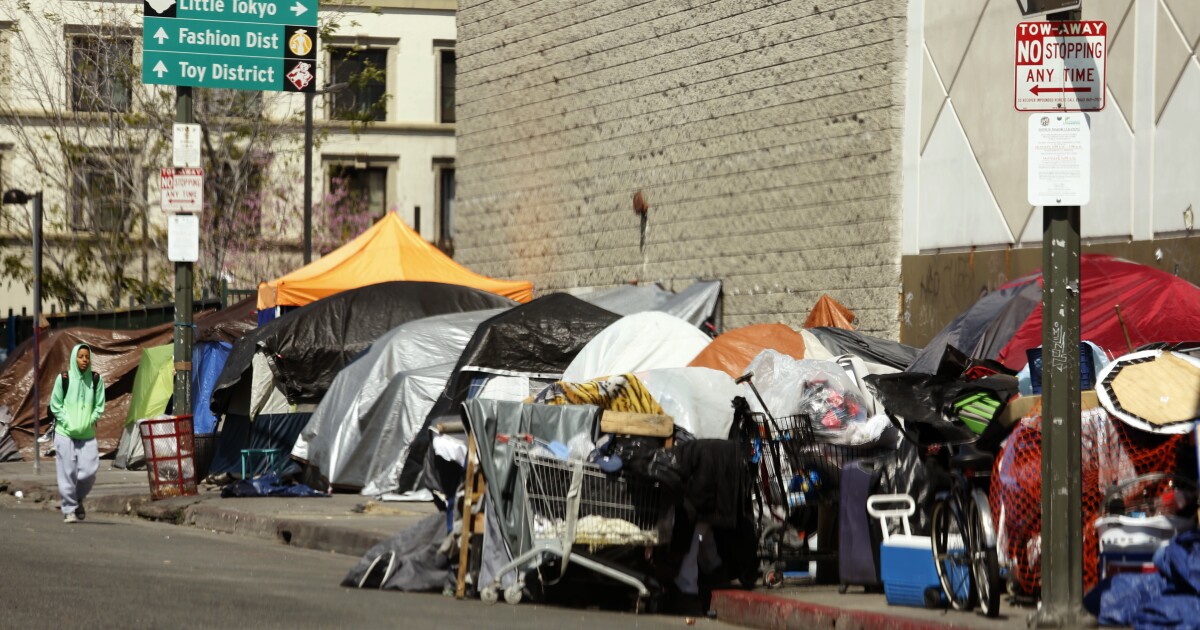 There is something to be said for shaking a fist and demanding better. But I also know from personal experience that you can't impose magical deadlines for getting people off the street,

$1bn must be placed in escrow and a spending plan “accounted for and reported to the Court within seven days.”

contempt of court charges and gaoling of the mayoral corps, of course

Los Angeles county is currently host to 66,400 homeless people, with 41,000 of those living within the city limits

either one of those numbers is bigger than my hometown. and for comparison actually would be more than 1 in 9 of people living in the smallest us state of wyoming ( and around 1 in 4 of people who voted there in 2020. )

meaning… it should be a more than big enough constituency for state and federal disaster funds, fema housing, and the like.

Hear, hear. There aren’t many people who understand the homelessness crisis in LA better than Steve Lopez.

I agree. I live to the south but I take the LA Times Thursday through Sunday and have an online subscription.
He’s one of the reasons. An outstanding journalist.

This is the only way to do it. L.A. politics are impossible.

Another thing that has gone almost entirely ignored is unoccupied houses that are money laundering / tax or currency shelters for foreign or domestic oligarchs. Other cities have been addressing this problem. There was something introduced in L.A. City Council but it has no traction.

I was sorta curious what legal justification the judge used and went and read the order. It’s an injunction, so the judge is a bit more free to pick and choose what they want from facts and law to justify the injunction.

It’s strongly worded, but not strongly written. Again, that’s because it’s an injunction. But also because it doesn’t properly discuss both sides before making a decision like a final judgement after a full hearing or trial. Should plaintiffs choose to appeal, there will be plenty to fight over.

As for remedies, the judge laid out plausible legal justification for most of the items. Except the $1 billion in escrow. That number was justified by the mayor having announced it as part of a budget. Better justification would have been an authorized budget with that amount. Relying on the announcement alone will make any appeal much easier (should the city chooses to).

Don’t give Josh Hawley and company any ideas.

Oh, they already have those ideas… we don’t need to give them to them… But at the very least the Bell Riots were a turning point in the Trek universe. Although there is still World War 3 to get through if we go by that, but then again, I’d kind of argue we’re in the middle of it now, it’s just not happening in the global north, so it’s not considered a “world war”…