even ignoring the hitler quotes - and the picture equating the state police with confederate soldiers, and the endless pictures of happy familes all of whom are white - the whole thing is execrable.

it’s all thin blue fascist propaganda. cops are not soldiers and equating their job with being a “warrior” is the opposite of what’s needed.

this is why defunding, and not more training is necessary. training will only fund more of this exact destructive mentality

I mean, if you are training Nazis, it would be pretty irresponsible not to cite the archetype.

This story was publicized by a high school newspaper. That is so awesome. I took a look at their webpage and the “about” page which clearly states their policies and goals.

What an amazing group of students. Kudos.

Yep. Would love to see them get some awards for this now that the KSP commissioner has had to resign over his departments violent Nazi training propaganda.

Based on the resources vs impact, I’d say this should get a Pulitzer nom. 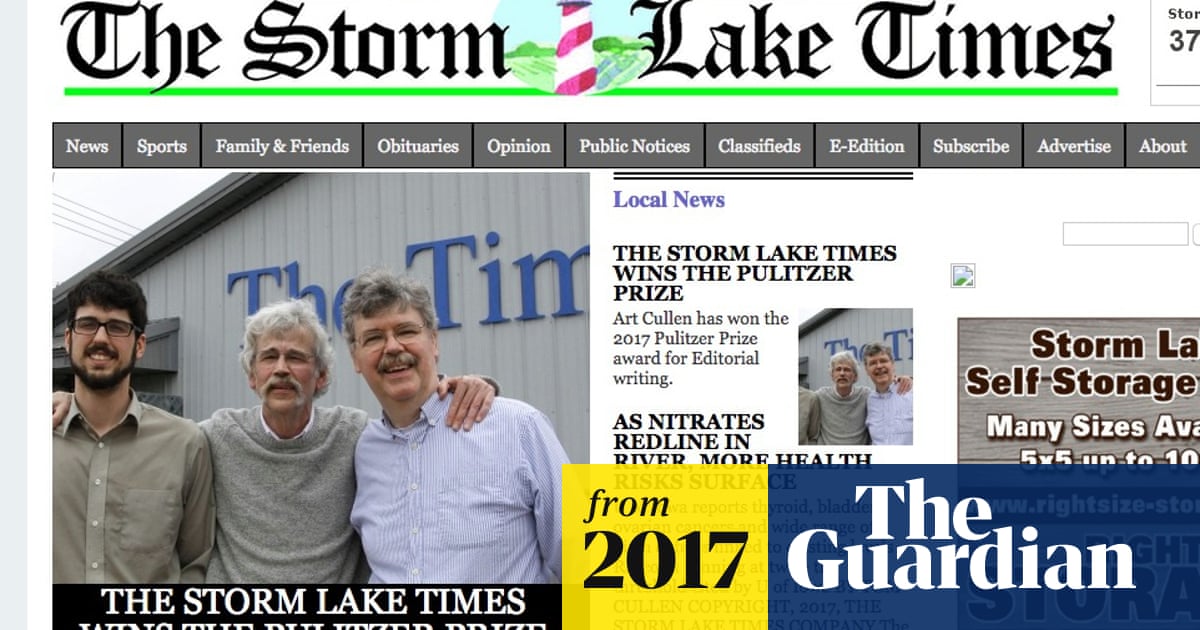 Art Cullen owns the 3,000-circulation Storm Lake Times with his brother John. His wife and son also work at the paper

It’s the defense that really astounds me. In what f-cked up world is “perpetually constant and regular employment of violence” an aspect of “service, selflessness, and moral guidance” that goes to “the fundamentals of law enforcement such as treating everyone equally, service to the public, and being guided by the law”?!

Good on the student journalists though, and I’ll second them for awards.

And Beau is on it, per usual

This story was publicized by a high school newspaper. That is so awesome. I took a look at their webpage and the “about” page which clearly states their policies and goals.

What an amazing group of students. Kudos.

I’m kinda amazed they got away with publishing it (considering it is Kentucky). Normally, the school authorities are quick to crush any potential controversial journalism from their students. (“controversial” meaning anything that potentially embarrasses or exposes corruption by the local authorities or political or economic powers)

Some stand up comedian had a very funny, but also oddly relevant joke about letting only black people be cops, and the white dudes can be firemen.

Yup. Focussing on the Hitler quotes is really missing the forest for the trees. The Ghandi quote, for example, sits realy awkwardly alongside the rest of the content, and I have a very strong suspicion that LT Curt Hall and anybody trained by him would have little tolerance for Ghandi in real life. Slide 3 “Wolves travel in packs, eagles soar alone” WTF am I expected to take from that - team work is for pussies? Slide 7 “people are not equal in morality or intellectual ability” appears to be equating the two? A few slides later we find an exhortation to “never do harm”, then spend about a dozen slides along the lines of ‘just react! Kill the bad people! Be ready to kill at all times!’ There is a VERY confused slide about individual vs collective responsibility.

I could go on and on, because every single slide is just terrible. But the main thing I got from it is oodles about physical courage, but approximately zero about moral courage.

The one about officers “degenerating” to the level of the people they “are there to control” pretty much sets the standard for evil. ACAB because they are trained to be.

I really think that law enforcement should require licensing, like being a doctor or lawyer. Would be a step towards, at least, preventing bad ones from continuing to work in that profession (since your license could be revoked). That of course requires that the licensing body is actually legit.

They kind of already do. The Kentucky State Police Academy runs “an intense, 24-week” course which cadets must - presumably - ‘pass’ in order to become state troopers. Passing that course is your licence to operate as a LEO. Of course, this slide deck is - was - part of that course, so …

this is why defunding, and not more training is necessary. training will only fund more of this exact destructive mentality

While there certainly could be more training, it’s even more certain that the kind of training is at least as important. I’m honestly having a lot of trouble working out how the quote in the article applies to the claim that this training is about “ treating everyone equally, service to the public, and being guided by the law” as Lawson claims. It could be if that quote were cited as an attitude to guard against. But apparently this whole thing was another part of the “warriors against crime” mentality that needs to be disposed of as fast as possible.

This is the line that I focused on:

They joined the police for the oppurtunity to pull the trigger. The training is to teach them how to shoot the right people at the right time. This is a horrific view of policing (and of humanity more generally)

“We didn’t choose the quote because it was from Hitler, we only choose it because we wanted to advocate violence. And also, it was the first thing that came to mind because we love Hitler so much”