Kevin O'Leary thinks the 85 richest people owning the same as the bottom 3.5 billion is fantastic

How did this asshat get hired to be on CBC News Network?

Holy shit. That is unbelievable. 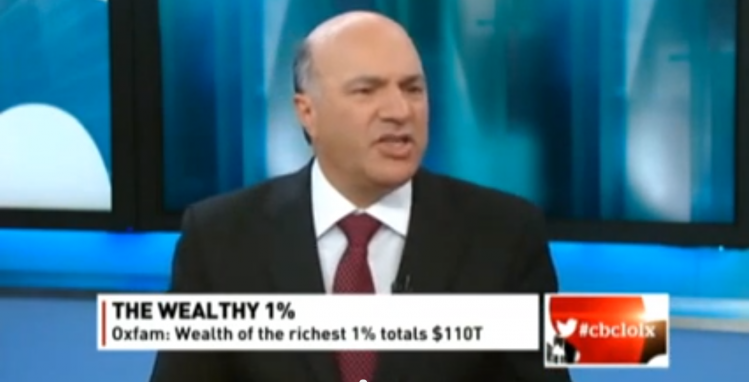 I want to hear Dennis O’Leary say that exact thing on that exact show.

Has he been far enough from poverty, long enough, to not even theorize that people might aspire to be non-poor because poverty pretty much sucks? Or that the world’s 3.5 billion poorest could ‘look up to’ somebody making $50k/year for inspiration, given their present status?

(Never mind, of course, the number of people on the top 85 list who may have accrued some of their assets in ways directly contrary to the interests of assorted poor people. Being a robber baron is honest work compared to doing natural resource extraction in places with weak rule of law…)

During a segment on the Occupy Wall Street protests on 6 October 2011 episode of the CBC News Network’s The Lang & O’Leary Exchange, O’Leary criticized Pulitzer Prize-winning journalist Chris Hedges for sounding “like a left-wing nutbar.” Hedges stated afterwards that “it will be the last time [he appears on the show]” and compared the CBC to Fox News. CBC’s ombudsman found O’Leary’s behaviour to be a violation of the public broadcaster’s journalistic standards.

I wonder if this could have anything to do with why O’Leary is on there.

Or it could just be the CBC trying to shake off the common accusation that they’re biased in favour of the left. On the plus side, it does give Amanda Lang plenty of opportunities to show her “That may be the dumbest thing I’ve ever heard in my life” face.

This topic was automatically closed after 1118 days. New replies are no longer allowed.