This also results in a 2-wheel-drive bicycle, which is kind of cool.

It’ll be banned immediately on safety/legal exposure grounds. It’s a great idea technically, but cities are going to be terrified that someone, somehow will sue them if there is an accident if one comes loose, or someone uses it to go too fast. Watch for “non-modification” rules.

Does anyone have any experience with this battery powered electric-motor bike assist doohickeys?

This unit is the rough shape and dimensions of a early 90s “laptop.” As a guy who both lived on a bike and dealth with those “laptops,” I can tell you that hauling around something that size and shape is NOT FUN ™.

For what? The drive mechanism on this electric assist motor is going to have poor mechanically efficiency. How much benefit is there, really, in one of these units? and how does that compare with hauling around 7 pounds of battery the rest of the day?

Pedaling is too difficult but carrying an electric motor and battery is convenient?

Almost anything that gets more people biking more often is a good thing. However, I’m hesitant to support this particular implementation.

Friction-drive systems wear out the tires very quickly. If these get popular, the cost of shared bikes will go way up as the tires need replacing. Not only is there the cost of tires, but there will be more bikes out of commission and more staff required to do the repairs.

Also, many jurisdictions have limits on electric assist. Quebec, for example, allows no more than 500W, it must shut off above 32km/h, and it must shut off when the brakes are applied or the rider stops pedaling.

More to the point, human power tends to ensure that driving ability scales (somewhat) with the speed you can drive at. Remove that requirement and you have a more dangerous vehicle.

There’s already been something quite similar kickstarted years ago, called the Rubbee 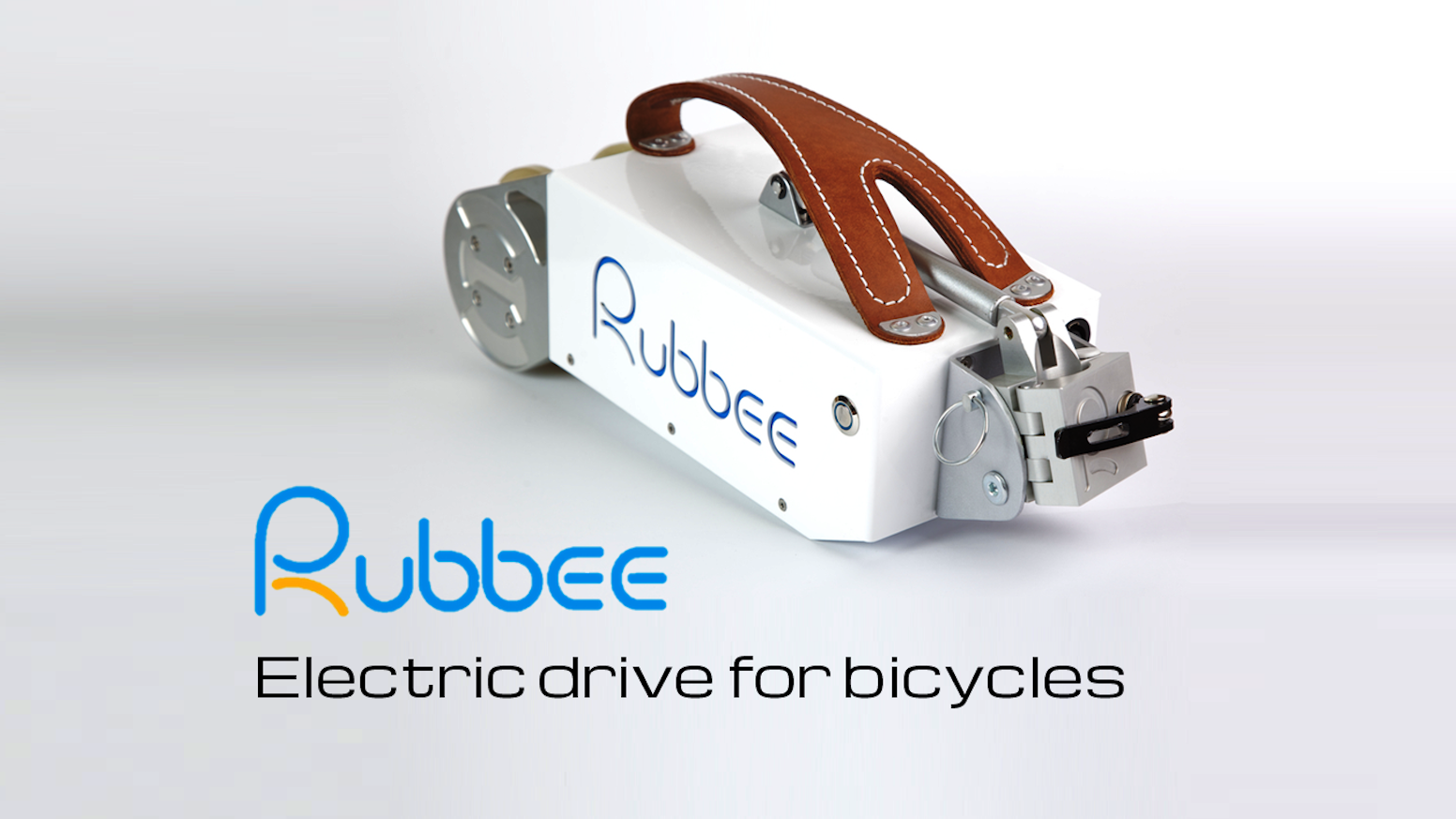 Rubbee - The electric drive for bicycles

Rubbee is a revolutionary electric drive which can be mounted on any bicycle in just a few seconds.

It clamps to the seat post. I know they produced them for their kickstartees but I’m not sure if they are for sale or not.

NYC (and other municipalities) defines a bicycle as being human-powered. Once you add a motor, you’re riding a different class of vehicle, and I’m pretty sure that disqualifies you from bike lanes, trails, and whatnot, just in the same way mopeds/motorcycles aren’t allowed.

ETA: And what the heck are these guys thinking with this pricing? You can buy a moped to own, register, and insure it for less than $1000.

And what the heck are these guys thinking with this pricing?

The numbers out of that little box are pretty impressive.

Not a new idea, but nicely packaged. What’s new is making it clip on to the most common hire bike. They do seem to recognise the different regs for unlicensed bicycles as well with a 750W-20mph for the USA and 250w-25kph for Europe. See here for other people working on friction roller E-Assist
http://endless-sphere.com/forums/search.php?keywords=friction+roller&fid[0]=28

I was skeptical at first, but I can definitely see the use case. For someone like me (and most NYers) owning an electric scooter or even a bicycle is a challenge because of walk-up apartments, storage space, etc. Which is why bike sharing in NYC is such a great thing - it gives bike access to lots of folks who otherwise wouldn’t have it. And bikes for commuters really cover that “last mile” of the transport system, covering places the subway doesn’t go and buses that come infrequently. A shared electric bike just makes the whole system that much more usable and less sweaty. I can see using this when biking to work during the summer, when temps over 80 would require a change of clothes and maybe even a shower at work.

Now the price is another matter - even if it’s a great “deal” it’s very expensive. And the legality is another matter too - if it can’t be used in bike lanes, or if NYC decides to ban it outright for use on shared bikes because of safety or concerns about added wear on the bikes, it’s a very expensive paperweight. I suppose if it can be used on a push scooter that is an alternative use if it gets banned, but still that’s a big risk. I’m tempted, but I have to really weigh try pros and cons.

Aside: for those wondering about the convenience of hauling this around, you have to realize it is only for a block or two; from home to bike station, from bike station to office, and back again. Not really a big deal.

For a personal bike it makes sense, tho a purpose built bike makes more sense/more efficient/more economic if an e-bike is what you want at all.

But for a last-mile bike it seems like a brick of conspicuous consumption that takes your whole attache case.

One of the beautiful things about these bike systems is the relatively slow speed of the unit. It gets you across the short distance it is intended for much faster than walking but at a wheeled pace that is relaxing to most, good for heavy congestion for most & just seconds or a minute behind the typical I’m-a-car-too-look-at-me-go-fast-I-race-bikes mindset of too many (North American) cyclists, without lycra, without special shoes, without a +1000$ bike, even without a helmet. Much faster than a car when used to purpose, not because of speed, but because of space & parking considerations/costs.

Sweat? Not much at the bike system bike’s optimal cadence while dressed appropriately for the temperature. You even get a breeze on a windless day while using the same energy as a pedestrian. Are they slow? No, they are purpose-built.

If you’ve ever been on a highway, exceeding the speed limit by 10 mph/kph the way we all do and laughed at that guy who needs to work so hard to go 10-5 mph/kph faster, changing lanes, revving, braking, changing gears, generally making an ass of themselves. Then you can’t see them anymore, until you do, 30 minutes down the highway, 4 cars ahead of you in the drive-through. You know what I’m talking about. Bike system bike designs practically eliminate that mindset IMO, people getting on them intending to go fast…?

But this might be good for people without the physical stamina to pedal gently for a mile or who have some other impediment. I just find the speed/sweat arguments for it are misplaced concerns when talking about bike-share systems. Deliberate & effective use of a bike system makes those concerns go away altogether as it is now for most anyone.

Cool fun to design, but given the market & the unit cost it’s a hard sell IMO. Except hipsters.

Toronto cyclists have a special hate for both the riders of the shared Bixi bikes (which may not be around much longer, as they are bleeding money, and our mayor, well, you may have heard) and for electric “bikes” which menace what are laughably called “bike lanes” here, that are really staging areas for pedestrians to look at their phones, and parking areas for delivery trucks and taxis. We love the idea of bikes for all, and of zero emission vehicles, but the reality is that the streets are full of bumbling fools who can barely keep a bike upright riding three abreast (Bixi) or chronic alcoholics barreling Vespa lookalikes held together with duct tape through the bike lanes at whatever maximum speed those monstrosities can hit. Which is just slightly faster than I can run, flat out. (Don’t ask me why I know this detail.)
I shudder to think of the mutant offspring of these parents, but I wish them luck with it.

Licensing for electric bikes is different in every single state, and often from city to city. A lot of it has to do with the number of watts or horses involved - over a certain point and it needs to be registered as a motorbike. Some states ban them altogether (because reasons - I’m looking at you, Hawaii).

Electric bikes are a great idea, and I’d like to see more of them. I don’t much like the design that uses a friction drive to spin the front wheel - not to mention putting that weight high and forward on your steering point, it could affect control. Much better to put weight low and centered below the rider, and why not figure a way to drive the chain?

Electric bike motors have some issues with overheating at times, I’m curious what the designer has done to alleviate that - the only thing worse than riding a bike without a motor is riding one with an overheated, heavy motor that isn’t working.

If I were you, I’d refuse to buy one. It sounds like you’d be very unhappy with it right from the start.

And don’t worry, as far as I know, their use is not mandatory.

Owning a moped is not the same as using a shared bike. Each has it’s own pros and cons, and they vary with the needs and wants of the individual.

As I live in a suburb and walk to work, I wasn’t in the market for this or any other electric bicycle assist.

My question was: “why would anyone want this”?

My experience suggested that, from an Engineering and Human Factors standpoint, this is a Bad Idea ™. Several posters seem to agree with me, using several different arguments. In particular, paying the cost of three bikes to wear out the community’s tires directly undermines the whole point of the community bike program.

But some one did make a good use case for short-distance electric shared bikes in an urban setting – which taught me something. So I am glad I asked the question. What did you learn from your post?

is there some kind of anti-kickstarter where i can vote to NOT do this? you get the worst of both worlds. a bad version of a moped, and removing the good qualities of bicycling.