I honestly don’t know what to say. Humans are the worst, most vicious, animals on the planet.

Those are the same guys the US and the UK used for their extraordinary-rendition-torture practice (before the civil war started). Let’s see what fake outrage US officials are going to utter about this leak and the torture they previously used for their own gains.

As an American, it makes me angry that we lost the moral high ground on torture. The number of people being tortured in Syria is off the charts but really all America can say is, “You are torturing too much. Torture just a little, like we did.”

Even with all these photos, though, it seems like Obama and the world will continue to do nothing meaningful to end Assad’s regime.

Haha I just read the Guardian article. An US administration official has something to say:

"We stand with the rest of the world in horror at these images which have come to light. We condemn in the strongest possible terms the actions of the regime and call on it to adhere to international obligations with respect to the treatment of prisoners.

"We have long spoken out about mistreatment and deteriorating prison conditions in Syria. These latest reports, and the photographs that support them, demonstrate just how far the regime is willing to go to not only deny freedom and dignity to the Syrian people, but to inflict significant emotional and physical pain in the process. To be sure, these reports suggest widespread and apparently systematic violations of international humanitarian law.

"The regime has the ability to improve the atmosphere for negotiations in Geneva by making progress in several areas. However, this latest report of horrific and inhumane prison conditions/actions further underscores that if anything, it is tarnishing the environment for the talks.

"As we have for over two years, and again today, we call on the Syrian government to grant immediate and unfettered access to all their detention facilities by international documentation bodies, including the UN Commission of Inquiry on Syria.

We have long said that those responsible for atrocities in Syria must be held accountable for their gross violations of human rights. The United States continues to support efforts to promote accountability and transitional justice, and we call on the international community to do the same."

As far as I can tell, the fewest lives would likely be lost if Assad won a victory so completely that the opposition essentially gave up (maybe another 100,000 die?). If the opposition wins, I suspect there may be a million dead the genocidal hatreds between the various groups finally runs out of steam (can anyone imagine any Maronites surviving the post-Assad civil war?).

And if no-one wins, the blood-letting goes on forever.

And now we’ve got the ICC, we can’t even use the “pay Assad a billion dollars to leave and hand over power to the least blood-thirsty faction, arm them to the teeth, and hope they can eliminate all the other factions so completely that they essentially give up”, although I’m not at all certain Assad would ever have accepted, and if he somehow survives his downfall, I’ll be happy to see him stand trial in the Netherlands

I’m glad I’m not making any decisions, because I can’t see even a less-bad option. All I can do is contribute to the Red Cross to help mop up the blood.

While there is a sense in which we are complicit in tortures committed by our leaders, our governments have repeatedly made it clear that they do not welcome our criticism of their policies. Many Americans protested torture by the US government whenever it came to light, as did many British people to atrocities committed by their government. The US voted Obama into power with a specific mandate to end the torture and restore the rule of law. It’s also clear that there are a large and increasing number of things that our governments do in our name that they do not want us to know about, to the point that they will attack anyone revealing this to the people supposedly granting these powers. It’s not that nothing more can be done, but if government policy is “business as usual, and to hell with the mandate of the people”, I’m not going to accept any of their guilt.

As far as ending the Assad regime goes, I agree with @FFabian. Getting involved in that way could just make things a lot worse. 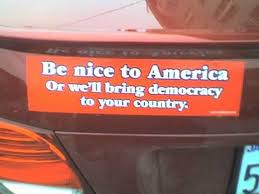 I think there is a huge difference and it’s really disingenuous to compare the US to Syria in regards to torture. The scope and scale of torture by the US is miniscule by comparison. The methodology is greatly different; death is rarely a result from the US methods. And probably most importantly is the context and reasoning behind the torture. It’s not like the Obama administration is pulling Tea Party members into vans and taking them to death camps because they are seen as enemies of the “regime”.

(And to be clear, I am not condoning torture by anyone, I just disagree with people taking the opportunity to move the spot light because America sucks.)

Never had a common housecat deign to live with you eh?

We humans always want to think we’re “the most” at something, but there are lots of nasty animal behaviors out there (raping dolphins, cats torturing smaller animals before killing them, or not… just for fun).

The sad thing is that we really should know better, and be able to override the tendency to revert to these kinds of behaviors.

I think you’ve demonstrated why it’s important not to lose the moral high ground. Exceptions completely invalidate an argument.

Which country is the US and which one is Syria?

I know the house cats very well. Sadly for me, they are useless predators in all aspects, except where toys are concerned.

Officially the reasoning of the Assad-regime is the same the US administration used: All those torture victims are islamist insurgents fighting for Al-Quaeda.

Which country is the US and which one is Syria?

Officially the reasoning of the Assad-regime is the same the US administration used:

Uh - huh. Again, even if both purport to do the same thing, or one wants to generalize them as doing the same thing, if one actually compares and contrasts the two there is huge difference.

Still, the US and UK governments gave up a lot of their right to criticise other countries when they decided that terrorist suspects could be tortured by proxy and have their legal rights denied (especially without establishing their guilt or clearly delimiting or being honest about the powers that they have).

William Roper: So, now you give the Devil the benefit of law!
Sir Thomas More: Yes! What would you do? Cut a great road through the law to get after the Devil?
William Roper: Yes, I’d cut down every law in England to do that!
Sir Thomas More: Oh? And when the last law was down, and the Devil turned 'round on you, where would you hide, Roper, the laws all being flat? This country is planted thick with laws, from coast to coast, Man’s laws, not God’s! And if you cut them down, and you’re just the man to do it, do you really think you could stand upright in the winds that would blow then? Yes, I’d give the Devil benefit of law, for my own safety’s sake!

Well, there are hundreds of thousands of dead people in Iraq that might disagree. The US invaded that country under cover of a series of blatant lies, perpetrated a large number of atrocities while there, and all in all made the country into a brutal mess.

No, the US is not Syria, not exactly. It does not, for the most part, imprison, torture and kill its own people. It does however bomb, kill and occasionally torture a fairly large number of people overall. In both cases the victims tend to be brown(er) people, but that hardly differentiates the two countries.

Assad deserves to go to prison forever, as do a large percentage of his henchmen. But so do Bush, Blair and (sadly) Obama. There is no correct amount of slaughter and torture, no threshold beyond which it becomes a crime against humanity. It is a crime (morally and usually legally) and they have all committed many.

We really need to create a way for people to get out of places like that if they want and live useful, productive and happy lives elsewhere.

Every person deserves every chance at happiness.