Looking for smart people at Brilliant.org

There are more ‘honours’ students (top 25%)(i.e. the smartest) in India than the total number of students in the U.S.

Not really. India’s population is almost 4 times that of the US and its also demographics skew younger, with a larger percentage of the population being aged such that they could still be students of some sort.

Or, to put it another way: it’s likely that India has roughly twice as many people under the age of 25 than the total US population. With numbers like that, results of this sort are only to be expected.

Also, I’d bet that the Indian government probably puts more resources into public education, and to do that here would inevitably lead to Stalin, apparently (at least if you listen to some on the right). And they put a lot more social emphasis on doing well. But I bet you can find evidence of this breaking down along class/caste lines. 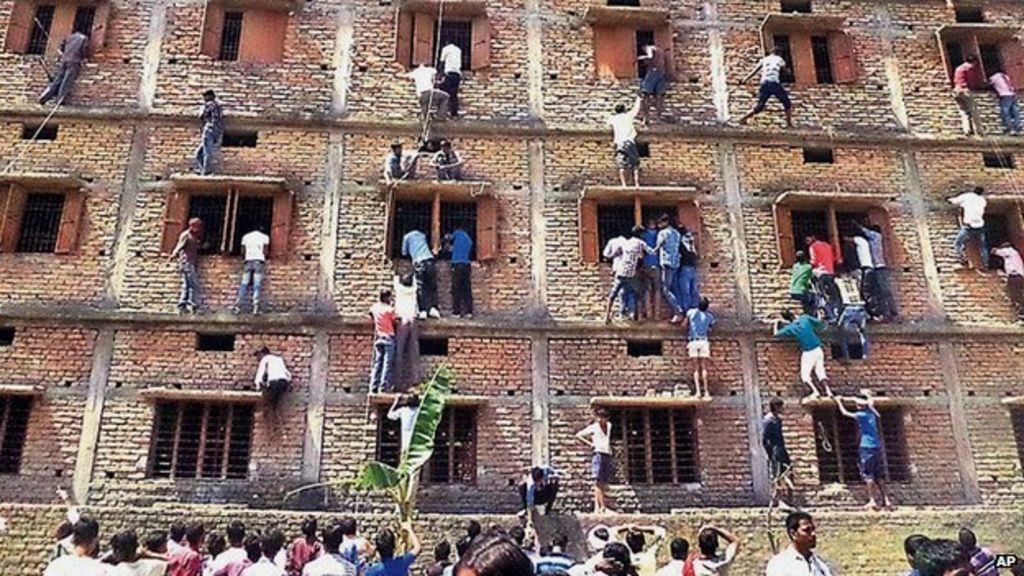 About 300 people are arrested after parents and friends climb walls to pass answers to school students sitting exams in India's Bihar state.

Standardized testing. I got educated in a fancy private foreign school (Thank you parents, for not being poor!) but I grew up in a region where public schools used standardized testing and heavily tracked students (humanities versus the sciences) from about middle school onwards. These tests can become the be-all-and-end-all of your future. They can decide whether you go to university, period. The suicide rates go up around the time exams scores are released publically in the newpapers. It’s awful.

Also, I’d bet that the Indian government probably puts more resources into public education, and to do that here would inevitably lead to Stalin

I think that whatever we’re doing, we’re doing it wrong. Okay, so I have the “advantage” of having gone to school with undergrad students pre-NCLB (2004- max of two years of exposure to the new standards) and now, post NCLB. I’m in a 200-level English class and my professor is rehashing basic fucking essay structure, out of necessity. I learned this crap in the fifth grade. I don’t think I was in classes with the cream of the crop the first go-around, but I definitely feel like things have gotten worse. I find that my fellow undergrads often lack basic reasoning and critical thinking skills. I don’t know if this is generational, but good grief are undergrads arrogant, too. I’ve been in classes with students who don’t understand shit well enough to get above a sixty on a piss-easy exam, fucking around on their cellphones in lecture while asking each other if they think the professor is going to curve the class grade.

I’m starting to feel like freshman orientation should consist of fire-hoses, verbal abuse, and swift kicks to egos of incoming students.

*Shoos kids off lawn.*
*Realizes he doesn’t have a lawn.*
*Someone is calling the police.*

These tests can become the be-all-and-end-all of your future. They can decide whether you go to university, period. The suicide rates go up around the time exams scores are released publically in the newpapers. It’s awful.

I’ve been in classes with students who don’t understand shit well enough to get above a sixty on a piss-easy exam, fucking around on their cellphones in lecture while asking each other if they think the professor is going to curve the class grade.

As someone who has taught today’s undergrads… all I can say is amen.

But the USA has almost as many students in the top 1% as Ireland has students, so you shouldn’t feel too bad.

I agree the performance stress and caste issue is not so great, but I need to think more about your Stalin comment.

hmmm…interesting comparison. I’m not American so I don’t feel ‘bad’ about it at all. I just see a grand clump of highly educated people contributing to the global community, presumably to the accelerated betterment of their own country in the process.

Oh, it’s just a snarky throw away line aimed at the rightwing who thinks that every time the government does ANYTHING it’s just a straight march to a Stalinist, cult of personality government. I’m always happy to debate the merits and limitations of public institutions, but the whole seeing a commie around every corner is just so boring and dumb, and frankly does nothing to further this conversation we need to be having about education in this country… I’m not sure where you fall politically, so I promise it wasn’t aimed at you, just at the right wing (not really even at all conservatives, just that loony fringe).

I’m with you re: the loony fringe, and didn’t take it personally. Thanks to you however Stalin has invaded my brain as my family has, in the past day, cruised through the Disney movie Anastasia, an episode of Foyles War, and had a discussion about how we learn/know history… Will having so many highly educated people in the world change the tendency for extreme power structures to take hold? Big questions. Vague, tenuous and scary answers.

I’ve been in classes with students who don’t understand shit well enough … fucking around on their cellphones in lecture while asking each other if they think the professor is going to curve the class grade.

This. I’ve been the instructor in that room. It is the norm.

cruised through the Disney movie Anastasia

Okay, am I the only one whose jaw dropped when the people of St. Petersburg were singing about how amazing the Czar was? I understand that the whole movie takes some giant liberties with history, but I kind of wanted to yell, “Oh come on!”

how we learn/know history

As a historian, I’d say that we do so through our own biased lenses, if we do at all.

Will having so many highly educated people in the world change the tendency for extreme power structures to take hold?

Honestly (and as a “highly educated” person myself - I suppose, if I must be, if my PhD makes me so), I’d say the answer to that question is an emphatic no, at least that’s what history tells us so far. Remember that many of the vangard of revolution were themselves highly educated in Russia, sons and daughters of the elites sick of the extravagances of their own class. Lenin, Trotsky, and Stalin all came from more humble means, but were smart dudes who though they’d figure out how to fix the very real problems of modernity and oppression. They didn’t. They weren’t immune to the realities of power and what some see as the Machiavellian necessities of rule. Stalin just thrived on it, I think. Look at all the trouble he went through to finally eliminate Trotsky.

I’m frankly wary of the western, technocratic argument too, that just throwing a disinterested expert at the problem will fix our problems (wasn’t that the 18th century republican argument - the elites should govern, because they won’t be swayed by the corrupting influence of money?). I don’t believe we can have a modern nation-state free of biases, at least not with the various theories of rule and governance that we have at our disposal. I think it’s problematic to assume that because someone is smart they are fit to be in power.

But you’re right that it’s all big questions

There have been so many attempts to gloss over how horrible the situation was in the late Tsarist period and why so many people were willing to support a revolution in 1905 and 1917. The usually conservative peasants aligned with the leftists, so that should tell us something. But the whole “reds bad, whites good” narrative is so strong, it’s hard to get past. Of course, on the flipside of that, when Emma Goldman went to Russia after she was kicked out of the US after the war, she and Berkman were pretty unhappy with what they found there.