I would be pissed too.

On a positive note, the guy behind him didn’t continuously lay on his horn and make things worse.

Sam Hill is an American English slang phrase, a euphemism or minced oath for "the devil" or "hell" personified (as in, "What in the Sam Hill is that?"). The "Sam" coming from salmon(sal(o)mon an oath) and "Hill" from hell. Etymologist Michael Quinion and others date the expression back to the late 1830s; they and others consider the expression to have been a simple bowdlerization, with, according to the Oxford English Dictionary, an unknown origin. Candidate referents for the use date back to at ...

Seems like a problem that could be solved by taxing the rich.

Just leave the quarter and move the arm yourself. I am obliged only to pay the toll, how the state chooses to process the payment (or not) is their problem. Just be happy that I didn’t bring my slingshot.

Ask not whom the toll repels, it repels thee.

Just leave the quarter and move the arm yourself. I am obliged only to pay the toll, how the state chooses to process the payment (or not) is their problem. Just be happy that I didn’t bring my slingshot.

You rap sheet must be riveting, as in I’m fairly sure it mentions a de-rivet tool

Why don’t they have a basket system where you pitch the coins in? 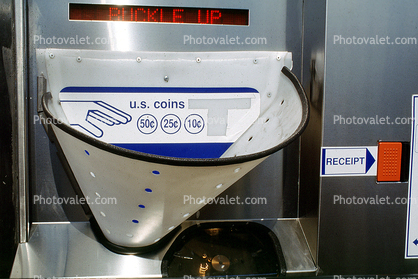 I like that the sign says they’ll take half dollars. These Kennedys have been eating a hole in my pocket! Copper-nickel clad: 11.34 g 40% silver clad: 11.50 g 90% silver: 12.50 g The Kennedy half dollar, first minted in 1964, is a fifty-cent coin currently issued by the United States Mint. Intended as a memorial to the assassinated President John F. Kennedy, it was authorized by Congress just over a month after his death. Use of existing works by Mint sculptors Gilroy Roberts and Frank Gasparro allowed dies to be prepared quickly, and striking of the new coins began in January 1964. The silver coins ...

Giggling kid ruined it for me. Takes me back to my own lack of empathy at that stage. The Susan B. Anthony dollar is a United States dollar coin minted from 1979 to 1981, when production was suspended due to poor public acceptance, and then again in 1999. Intended as a replacement for the cumbersome Eisenhower dollar, the new smaller one dollar coin went through testing of several shapes and compositions, but all were opposed by the vending machine industry, a powerful lobby affecting coin legislation. Finally, a round planchet with an eleven-sided inner border was chosen for the ...


For the $2 coin, due to Americans’ resistance to even a valid $2 bill, how about the Donald Trump $2 memorial coin in recognition of his years of service? “As phony as a Trump Twoony” could slide right into the language.
3 Likes
Bobo June 16, 2017, 5:12am #12

Problem with the Susan B Anthony’s was that they’re almost the exact same dimensions as a quarter. You really have to idiot proof anything for us.

Now the Sacajawea dollars… I have no idea why those didn’t take off. Slightly larger than a quarter, golden in color…

Now the Sacajawea dollars… I have no idea why those didn’t take off. Slightly larger than a quarter, golden in color…

I love those. And the presidential dollar coins, and the half dollars. I know why they didn’t take off though. Simply because ATMs and cash register drawers aren’t designed for them.

They have slots for 1s, 5s, 10s, 20s, etc., and for pennies, nickels, dimes, quarters. Then there’s a catchall underneath for things like checks, food stamps, coupons, $2 bills, and 50¢ or $1 coins. People first get their cash from an ATM (which only hands out $20s) or from a cash drawer (the employee will just pull from the standard slots). When they spend it, they get change, pulled from the standard slots. The stuff in the catchall doesn’t get circulated unless the cashier happens to run out of $1s, is in a hurry, and knows that they have something in there that’d be quicker to pull out than to exchange $20s for a new pack of $1s from the office.

It’s sad. They’re really nice and convenient, but the only way to get them into significant circulation would be to require changing all cash registers nationwide. That would probably be substantially harder even than getting real chip + PIN card processing working in the U.S. (Much easier technologically of course, but that is never the barrier to these things.)

OTOH, because etymologists consider Sam Hill to be a bowdlerization, frauenfelder could be seen as using the more offensive, pre-1830’s version -
https://en.m.wikipedia.org/wiki/Thomas_Bowdler

You rap sheet must be riveting, as in I’m fairly sure it mentions a de-rivet tool

We were all bastards back then, weren’t we?

OR by retiring the penny!!

Any relation to Sam Hall?

If you ever run into the situation where a vending machine rejects your quarter, check the coin’s date. The 90% silver ones from 1964 and previously have a different weight and electromagnetic signature than modern clad coins, and are routinely rejected by many types of vending machines.