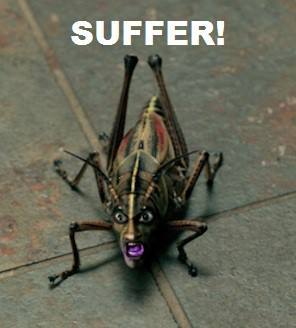 “P.tricuspidatus is also remarkably able to survive the predation of their host, being able to wiggle out of the predator that has eaten the host.”

AAAIIIIEEEEEE!!! This is when one of those government surplus flamethrowers would come in handy. shudder

Mother Nature is an evil bitch…

I once caught a soldier beetle which has a really pretty green iridescent shell. But he was all crazy in the jar, constantly running. I later notice that there was a hole in his lower abdomen and inside it was basically hollow and something was inside eating him alive…

Anyone who posts such things should be subject to the inhabitation thereof. That is all.

Thanks a lot Rob! We’re having spaghetti tonight!

All those squicky sci-fi horror movies are real, just rendered bigger and toned down for your comfort level.

if you want a vision of the present, imagine a boot stomping a cricket forever.

When it comes to parasites that alter behavior, I’ve always dug the Cordyceps fungus.

Didn’t we previously see the spider that had one of these things (for your dubiously squicky pleasure)?

“I think we can pass on GIFfing this one.”

Yeah, but that applies to every single BB post.

When it comes to parasites that alter behavior, I’ve always dug the Cordyceps fungus.

I have the greatest respect for my colleague’s work in the realm of ‘horrifyingly banal and unimaginably common and far-reaching sadism of the sort that renders even the historical existence of the “natural theologian” risible beyond words’; but I must give due credit to Sacculina barnacles, for their efforts in involuntary transgender bodyhorror studies.

That’s amazing! Now you can’t say evolution made that, it’s obviously the creation of an insane and malevolent God.

Well, if the crab is female, it just neuters it and places its own egg structures where the crab’s eggs would be, so that the parasitized crab will helplessly tend to the next generation of its own destroyers.

If it’s a male crab, it castrates it, feminizes it, and then places its egg structures where the crab’s eggs would be had it been female; for the same purpose.

Can you imagine the response of Team Traditional Values if humans had such a parasite?

I normally tend toward the ‘stochastic and wholly impersonal’ interpretation of the universe; but for parasiteology, I make an exception.

As some wise man once said, “Damn nature; you scary.”

Cat caught and ate half of a vole one time, left the other half on the porch. I looked down and realized in horror that the half-a-vole was slowly crawling away from me. When I went to look closer, I saw that a botfly larvae, probably a sixth as big as the vole itself, had partially emerged from the open end of the vole and was dragging its former host as it tried to escape. They typically infest cattle, and are more appropriately sized to them.

Apparently there’s a Youtube video called “The biggest human botfly compilation ever! Top 10!”, but I’m not an asshole.