Map shows how socialist New York City was 127 years ago

That map seems a bit disingenuous to me. It takes a pretty hardcore libertarian to refer to public city streets as “socialism”.

Considering we have a hardcore libertarian-capitalist as PM in Britain, I think it is a valid map, a warning as to what we could lose if they get their dream of small government.

Of course, not all socialists believe in what we would think of as a government, so things can get complicated fast.

Really? How are they not socialism? Setting aside all of the boogeyman lies that are told about socialism, publicly funded and collectively owned roads, parks and other public infrastructure seem the very definition of socialism.

Just as our government isn’t “capitalist”, it’s an appropriate term to describe certain aspects of the US’s economic governance, socialism may not be the primary organizing principle of government, but it’s certainly an aspect of it and pretty well exemplified by roads and collective resource development and protection.

Really? How are they not socialism?

in his 2016 State of the Union address, Donald J. Trump had to emphatically state

Only to Americans, maybe, who have grown up with such perversion of the word that it has lost all meaning.

All public services are socialism. Of course roads are socialism. This is what socialism looks like– taxes paying for nice things we all need. Why some people are terrified of that, I do not know.

All public services are socialism. Of course roads are socialism. This is what socialism looks like– taxes paying for nice things we all need. Why some people are terrified of that, I do not know.

People have spent the last 127 years splitting hairs over this, but “Owned communally and maintained for the benefit of all” sounds like a pretty good working definition to me.

Expanding and deepening that principle is of course where this gets deeply contested and even more political.

Why some people are terrified of that, I do not know.

Because those could be toll roads?

Omg, my dad, who despite serving a long career as a public servant, has a deep and unreasonable distrust of government (evangelical conservative, ‘natch!). He will literally drive hundreds of miles out of his way to avoid toll roads. When he came to our wedding he drove through the Adirondacks from the west (!!!) just to avoid tolls coming across NY. Easily wasted twice the cost in gas driving on white-knuckle mountain passes instead of the interstate.

Unrelated, I’m sure, NY has remarkably better roadways than Missouri where he lives. And complains about the condition of said roads constantly.

I went through the archives of the NY Call*, the Socialist paper of the time, for a project some years ago. For me, the highwater mark of USAmerican Socialism was probably 1917 when on November 8, 1917 Socialists won 18 state and City posts - 10 assemblymen, 7 aldermen, and one municipal court judge (America’s Socialist Revolution: The 1917 Election of Judge Jacob Panken – The Forward). On March 30, 1918 those Socialist aldermen called for a living wage for city labor.

By 1920, the Socialists then elected to the NY Assembly were expelled. Twice.

A Century Ago, Socialists Represented New Yorkers in State Government

DSA’s newly elected officials are part of a rich history.

How Socialist was NYC a century ago? Much more politically Socialist than we can even imagine today.

PS: The best definition I know of Socialism comes from the NY Daily Call of November 1, 1918 in Art Young’s Political Primer: “What is Socialism? It is business operated for public benefit instead of private profit.”

Sounds like a B or Benefit Corporation to me or the idea of trusteeship in Gandhian or nonviolent economics.

*There was also a Chicago Daily Call and I wouldn’t be surprised to discover that Carl Sandburg was deeply involved in it.

For me, the highwater mark of USAmerican Socialism was probably 1917 when on November 8, 1917 Socialists won 18 state and City posts

If we’re talking about the whole USA, Eugene Debs got 6% of the vote in the 1912 presidential election; socialism was widely popular and, prior to the cold war, closely associated with the labor movement as in most other countries (meaning it was also popular, perhaps more so, in rural areas).

And that’s just your actual Marx-reading capital-S Socialism. Broadly socialist principles were more popular again, and they still are, if you ask the question right.

The establishment really depends on the public’s Pavlovian conditioning against the word itself, which is a perilous position for them – it’s hard to successfully gaslight someone who has Wikipedia on their phone.

The problem is that fear of socialism isn’t just based on “boogeyman lies” but on actual history. Socialism can mean just nice benevolent social services, but it can also mean a dysfunctional top-down control economy where shortages were constant because people just can’t out-predict markets. The countries that in the West were often called “Communist” did not consider themselves so – Communism was the utopia that they hoped to achieve some day (slogans like “We will achieve communism by the year 2000” were common), but the current state of their societies they considered “socialism”. So the term has a lot of baggage.

OK, I’m kind of geeking out on this map… Not a New Yorker, but I can discern a (relatively) big white patch in Midtown that, I guess, is New York Central infrastructure, as (a part of it) coincides with where the current Grand Central was built in 1913 (whereas today, and since at least the late 1960s, that would all be “red”). What I’m not sure of is the part that seems to extend west of there, or maybe it’s just an inconsistent contrast of red-and-white as it corresponds to otherwise-normally-sized-and-shaped city blocks.

Further south there are a couple of larger-than-usual blocks; I’ve narrowed this down to where Broadway turns south (well, perpendicular to the rest of the city grid) and Bowery keeps the southeasterly direction (both relatively speaking – this map implies Manhattan lines up north-to-south which it doesn’t). Anyway – best I can tell this patch represents part of NYU (e.g. the present-day bookstore) although it spreads out more than that, today.

Also curious why the Harlem River is completely red – maybe the gov’t dredged it for shipping or something? (I do see where, by the time of this map, the river was diverted south of Marble Hill which is now physically connected to The Bronx but still politically part of New York County, i.e. Manhattan)

ETA: Just saw this; Marble Hill was actually an island at this time: 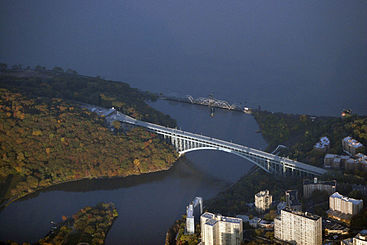 Over time the channels of the Spuyten Duyvil and Harlem River were joined and widened and additional bridges were constructed, but maritime transit was still difficult and confined to small craft. By 1817, a narrow canal was dug through the south end of Marble Hill at approximately 222nd Street, known as "Boltons' Canal" or "Dyckman Canal". With the completion of the Erie Canal in 1825, and the advent of large steamships in the second half of the 19th century, a broad shipping canal was proposed...

The Market waves its magic wand, and if we can’t afford something, that’s not a “shortage”—it’s our own fault for not having more money, and we deserve whatever deprivation we have to suffer

Do you remember the early weeks of the pandemic when you couldn’t buy toilet paper anywhere? That was pretty much the case all the time in the Eastern Bloc (also with shoelaces, razor blades, and countless other small necessities) You can complain about inequalities and how the rich buy needless luxuries like Rollexes because they aren’t taxed enough and I’d agree with you, but the fact is unrelated to the general success of markets in getting necessities to the general public, and we can reduce inequality without getting rid of markets.

The Market never fails—we can only fail it

I would argue that there has never been a socialist government, merely ones that that branded themselves as such. The issues you’re talking about are just as likely to occur in other forms of government (shoelace shortage? How about healthcare being utterly inaccessible?). Pandemic shortages have nothing to do with a system of governance and everything to do with hoarding, by individuals, corporations and the trump admin’s state vs state vs fed policy (see also: inflation).

The point that the map above is making is that socialism isn’t just a moniker used to hide classic governmental malfeasance, but policies and programs that literally everyone utilizes and benefits from on a daily basis. The “boogeyman” I’m referring to is conflating cronyist, oligarchical governments with a template for economic and social constructs that serve as many people as possible. Again, there is no such thing as a socialist government. Even the Northern European countries so lauded and vilified for their socialist policies are still parliamentary/constitutional monarchies and federal republics.

ETA: I would also add that the Cold War bounty enjoyed by western nations was predicated on inequality; whether that was within their own nation or from the exploitation of seized and occupied lands outside their borders. The car didn’t become the only realistic choice for transportation in the US just because Ford execs were greedy capitalists (but that, too!). Cars are useless without oil.

we can reduce inequality without getting rid of markets.

I don’t think anyone is advocating for that and I’d say it’s a stretch to pin that on socialist ideology. There is absolutely nothing contradictory about the idea of collective benefit and private ownership profit. I mean, that’s exactly what taxes are for, right? You had a great year? Awesome! Now we’ll all have better healthcare. Pretty simple.

Even the Northern European countries so lauded and vilified for their socialist policies are still parliamentary/constitutional monarchies and federal republics.

Communism, on the other hand, has never really even been attempted. Centralized control of the economy does not, in and of itself, communism make.

but it can also mean a dysfunctional top-down control economy where shortages were constant because people just can’t out-predict markets.

So what about Mutualism or Market Socialism then?

Mutualism is an anarchist school of thought and economic theory that advocates a socialist society based on free markets and usufructs, i.e. occupation and use property norms. One implementation of this system involves the establishment of a mutual-credit bank that would lend to producers at a minimal interest rate, just high enough to cover administration. Mutualism is based on a version of the labor theory of value that it uses as its basis for determining economic value. According to mut Whi...

Market socialism is a type of economic system involving the public, cooperative, or social ownership of the means of production in the framework of a market economy, or one that contains a mix of worker-owned, nationalized, and privately owned enterprises. The central idea is that, as in capitalism, businesses compete for profits, however they will be "owned, or at least governed," by those who work in them. Market socialism differs from non-market socialism in that the market mechanism Market s...