Margaret Atwood and "The Handmaid's Tale"

In 1988, I was a junior in high school. My sister came home from college with one of those Norton anthologies with whisper pages. You old English majors know, the pages were so thin they were barely there. I grabbed her copy and happened upon “Variations on the Word Sleep” by Margaret Atwood.

The love affair had begun. Granted, I’m biased. I wrote my master’s thesis on female relationships, focusing specifically on her novels “Cat’s Eye” and “The Robber Bride,” but her ultimate appeal to me is this quote:

“Her [Atwood’s] feminism assumes women’s rights to be human rights, and is born of having been raised with a presumption of absolute equality between the sexes. ‘My problem was not that people wanted me to wear frilly pink dresses—it was that I wanted to wear frilly pink dresses, and my mother, being as she was, didn’t see any reason for that,’ she said.” (http://www.newyorker.com/magazine/2017/04/17/margaret-atwood-the-prophet-of-dystopia)

She has eschewed labels – feminist, science fiction author, et al – and it is this repudiation that has resonated in ways I cannot begin to parse.

Needless to say, I awaited the arrival of the new Hulu adaptation of “The Handmaid’s Tale” with something only slightly less than the arrival of my own children.

I’ve been in airports all day, unable to watch, but I read copious analyses from multiple sources – The New York Times, Washington Post, Hollywood Today. I even stooped to Fox News. I finally arrived home and immediately watched.

I have a burning need to talk about subversive television, particularly given the global political climate, with intelligent people. Thus, I turn to BBS. Have you watched? What do you think?

You almost make me want to get Hulu with this teaser. Almost.

The review in The Atlantic is adorational, hopefully a good sign. It sounds great.

I’m not on Hulu either, so I’ll have to wait until it’s on “streaming”.

In the face of this much advanced hype, many freshman shows might be tempted to slink quietly away, acknowledging that there’s just no way to meet these kind of expectations. But The Handmaid’s Tale has somehow managed to surpass them. 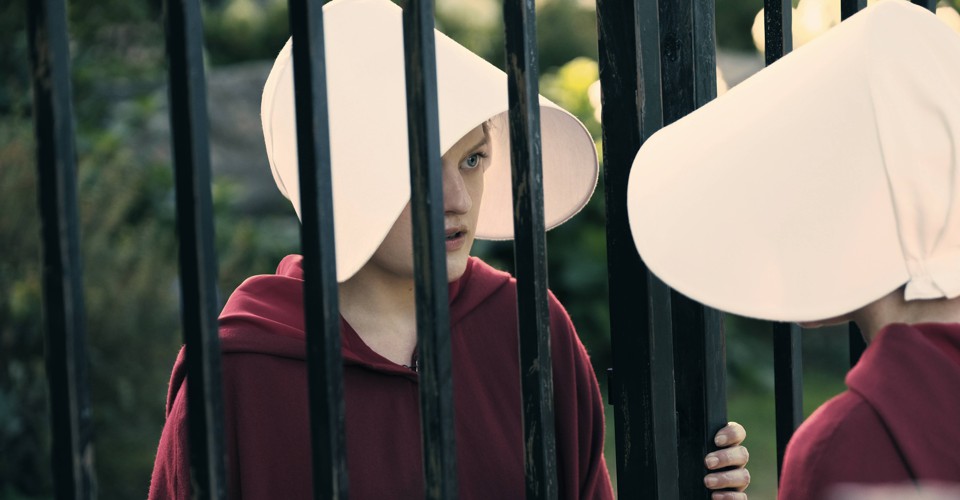 The Visceral, Woman-Centric Horror of 'The Handmaid's Tale'

The Hulu show has created a world that’s visually and psychologically unlike anything in film or television.

Arr, matey, it be “streaming” now off the port bow.

That was very naughty-cal of you.

Do it. This is the kind of TV that needs support.

Perhaps I’m in the wrong place for this discussion. Perhaps I expect too much. Perhaps, even, I’m too close to the subject material at hand.

I wanted discussion about how this particular dystopian fiction might resonate with this crowd. This is some of the most important television I’ve seen in my lifetime, and I do not say that lightly.

I’d like to chime in but to my shame I still haven’t read it and don’t have Hulu. It’s on my list though. Next time around!

That’s okay, and you’re sweet. I gave a copy (pic below) to my husband over 20 years ago and finally shamed him into start reading it day before yesterday. He’s the most enlightened male I know, but here we are.

After much discussion with others on different platforms over the past two days, I’m dismayed by the number of men who have had women suggest this novel or even give as a present, only to find they didn’t actually read. it.

I’ll just say I slogged my way through “Ham on Rye” because it resonated with him. If you have a woman you respect give you a book, read it. Trust me, she’s slogged her way through much more than Bukowski during her lifetime, reading countless bildungsroman and other “universal” experiences of life written by centuries of men.

After much discussion with others on different platforms over the past two days, I’m dismayed by the number of men who have had women suggest this novel or even give as a present, only to find they didn’t actually read. it.

I wonder if it’s the title throwing people off. Knowing nothing else about the book I assumed it was a period piece that had something to do with class struggle a-la Downton Abbey.

Let’s do an SAT/ACT analogy:

Handmaid’s Tale is to Downton Abbey as The Road is to The Thorn Birds.

Considering today’s political climate, it is almost uncomfortable to watch at times.

I need to dig through my library of ebooks…I’m reasonably sure I have a copy there.

It is truly terrifying, particularly considering the health care and now, well, today with Comey. 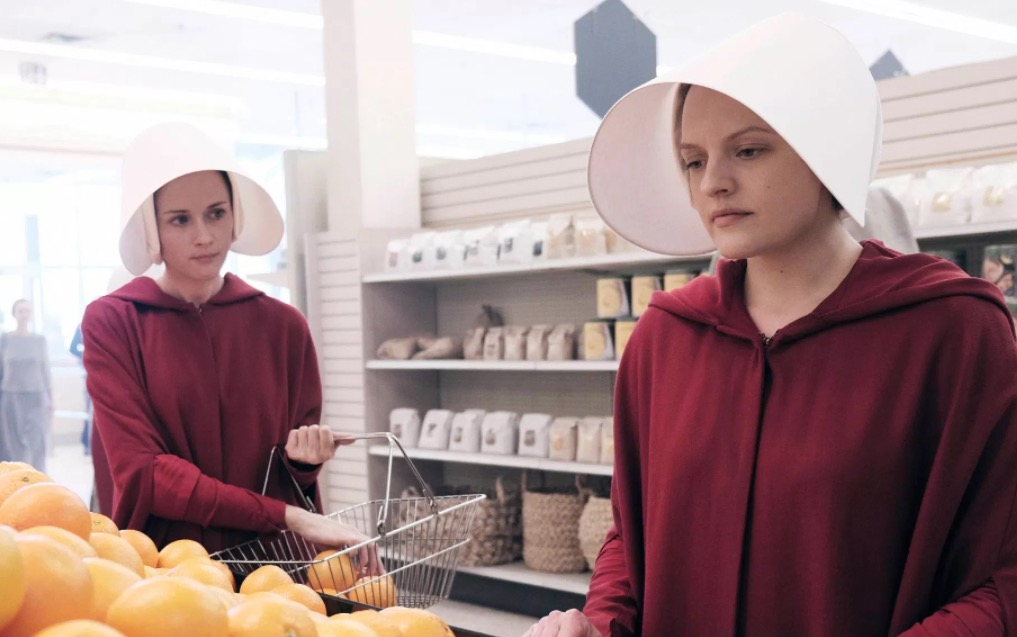 It’s Scary That Playing “Republican or Handmaid’s Tale?” Is So Hard

It's hard to traverse the Internet lately without tripping over articles on how Hulu's Handmaid's Tale adaptation seems eerily relevant these days, but pointing that out is only one way to put things into frightening perspective. Another, as...

Four episodes in, it feels like horror is the appropriate response, but they keep blunting that by playing ironically upbeat music as the worst horrors are revealed. That feels untrue. But of course they want viewers to keep watching instead of turning away.

I read the book years ago and saw the movie. I’m not watching the TV show yet, maybe later.

The movie was … not great. The show, however, is light years ahead. The juxtaposition of the main character’s life before (much like our own) and then after the dissolution of church and state – equality exists on a very precarious knife’s edge, particularly when justified through certain religious texts. It’s no coincidence women are choosing those red robes to make a very strong statement: Handmaids are forming a resistance to anti-abortion measures across the country.

I will chime in with not on Hulu so yeah. I read a bit of the book (my mom had a copy) and watched the movie when it came out on video and remember all the outcry about it then and I was all like ummm aren’t these things you are getting up in arms about IS THE WHOLE FUCKING POINT of the story.
The film was disturbing enough thanks. Not sure I could deal with a miniseries.

ETA: And I have watched and enjoyed plenty of disturbing horror films that well they are not real, this story is too damn close to what we are capable of slipping back to as a society.

We snagged a friend’s hulu to watch Fargo, will be starting this tonight (in about five minutes, actually…)

Am excite, that’s for sure!