Marvel at New York City in this 1911 documentary travelogue

Lots of horse-drawn carriages, and more automobiles than I would have guessed.

You can tell that cars and electric trolleys are winning in 1911 by the near-absence of mounds of horse poop on the streets. 15 years before this film was shot, 2.5 million pounds of horse manure (and 60k gallons of horse urine) were left on the streets of NYC every day, and it was very evident:

On a less smelly note, one of the neat things about this film is seeing many buildings I recognise from my time there.

Horse drawn carriages, sparse traffic, and olde timey clothing aside: You still get the impression that this is a bustling modern city. This film must have blown minds back then.

“Metropolis” was based on Fritz Lang’s impressions of Manhattan at around this time.

On a less smelly note, one of the neat things about this film is seeing many buildings I recognise from my time there.

The round building by the Battery and the Flatiron Building were two I recognized for sure.

I was gonna say: “Gee, that guy with one leg really gets around!” - but then I realized the second fella was missing the other leg. So I’ll just shut up now.

I wonder if they split a pair of shoes. {rimshot}

The limo with the bored kid had the wheel on the right side. Import? Not standardized yet?

I notice the relative lack of street vendors. I bet the side streets, especially on the Lower East Side, would have been teeming with them.

All I seem to be able to get is:
"Sorry
Because of its privacy settings, this video cannot be played here."
when I go to look at the video at MOMA. Is it just me?

Was there already a decline in horse traffic by 1911? I’d heard that around 1910 there were more horses in the world than any other time before or since.

A century ago, yet very familiar.

I’d like to point out a couple of things:

The railing at 3:12. You can still find that type of railing in use around the city. I had no idea it was that old. It’s surprising how long some infrastructure survives.

That’s Herald Square at 5:35. Macy’s would be just off-camera to the left. The ornate building in the background is the NY Herald building. The building is gone, but the sculptures remain at the square.

I could go on…

I used to be sad because I had no shoes. Until I met a man who had no feet.

and I said… hey! Can I have your shoes?

In cities, there was a decline. About the time the photo I posted was taken there was serious concern that’s summarised as “The Horse Manure Crisis of 1894.” Urban planners (esp. in NYC and London) were freaking out over the ever-increasing volume of horse-flop that had to be cleared from the streets every day. It was all they could talk about at the first international urban-planning conference in 1898, where they gave up on finding a solution.

Fortunately for them, electrical and internal combustion technology saved the day. The year after that movie was taken, automobiles outnumbered horses in NYC. Six years later, horse-drawn trams were phased out. It was good luck and timing, helped by the fact that a massive and well-funded horse poop denialist campaign didn’t exist.

(I came across this in Mark Jaccard’s book on sustainable fuels) but alas Snopes declares it to be a myth.

“A new source of power called gasoline has been produced by a Boston engineer. Instead of burning the fuel under a boiler, it is exploded inside the cylinder of an engine. The dangers are obvious. Stores of gasoline in the hands of people interested primarily in profit would constitute a fire and explosive hazard of the first rank.

“Horseless carriages propelled by gasoline might attain speeds of 14 or even 20 miles per hour. The menace to our people of vehicles of this type hurtling through our streets and along our roads and poisoning the atmosphere would call for prompt legislative action even if the military and economic implications were not so overwhelming. The cost of producing gasoline is far beyond the financial capacity of private industry. In addition, the development of this new power may displace the use of horses, which would wreck our agriculture.”

The hats. My god, the hats!

I am amazed how clean most of the buildings are. I remember London in my youth - all the buildings were a grey-black-brown colour from coal smoke. All the great station arches were dark except for the odd broken pane letting in a shaft of light. I remember St Paul’s turning from black to light sandstone as it was cleaned.

It’s a good question. Perhaps it’s because NYC didn’t have the same level of proximate heavy industry (in comparison to, say, Pittsburgh) and because its coal-burning era was shorter and less intensive (more of a wood and gas-jet town) than London’s. I’m sure they had to do some cleaning, and maybe that happened around the same time horses were being phased out.

“Here is a man seeking out Manhattan’s famed Prosthetic Limb District to see if he can find something in his size at a competitive price.”

At 3:44 it appears two guys are holding hands walking down the street. Wonder if New York was tolerant even then, guys just used to hold hands, or that’s really a guy and girl and i just can’t tell.

It’s difficult to make predictions, Especially about the future.

Looking a Wikipedia’s entry on holding hands, makes chaps openly displaying affection seem more common outside of Northern Europe. I guess these guys could even be Italian or Sicilian.

Holding hands is a form of physical intimacy involving two or more people. It may or may not be romantic. Whether friends hold hands depends on culture and gender. In Western culture it is mainly done by spouses and romantic couples, as well as parents and small children, where it may be an authoritative control, not affection. However, same-sex couples still suffer from homophobia. In 2012, an average of 74% of gay men and 51% of lesbian women responded EU Fundamental Rights Agency survey, sayin...

Also, it seems that physical contact was more normal in the past. Here is a source photo for the upcoming Daniel Day Lewis film, “There will be cuddles”. 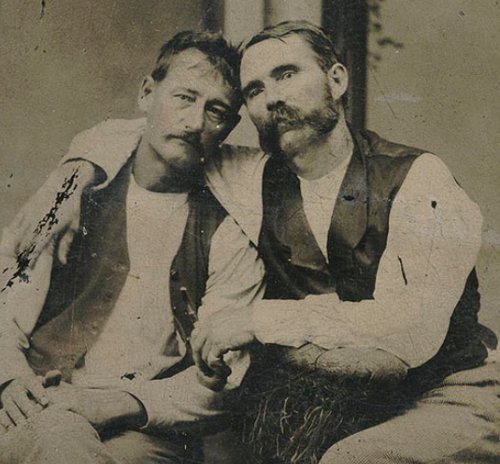