Terrorist, despite increasingly common usage, doesn’t just mean ‘really bad person.’ It implies the use of violence to effect political results through terror or, on occasion, direct destruction of something/someone hated.

Terrorism is the use OR THREAT of violence to affect politics by instilling terror in the populace. Phoning or posting an assassination or bomb threat for political ends is terrorism. Gov’t pronouncements promoting fear are terrorism. Much verbiage from recent GOP administrations has been terrorism. We needn’t look far.

Well the shooter has apparently been apprehended, rather than shot on sight; so I’m assuming he is white, making him, according to the media, a “Lone-wolf Mad-dog It-is-too-early-to-discuss-gun-control Killer” rather than a “Muslamic Seal-the-borders Terrorist”.

The difference is motive, not skin-color. Nightclub shooting? Definitely terrorism. I mean, the perpetrator took pains to let us all know it was for ISIS. Incel stuff… yeah. I mean there were manifestos. That’s a political goal, of a sort.

Again, this has nothing to do with skin color, ethnic origin or anything of the sort. McVeigh is definitely a terrorist, and I’d argue that the Beltway snipers aren’t. The difference isn’t just empty semantics either. You fight terrorism using different tools than you do spree killers or mass murderers or serial killers. All lethal, all evil, but with different etiologies.

Then the real difference only matters in a goddamned court. For the rest of this living with these people = living around terrorists who will kill you. I don’t give a damn if he’s dangerous because of his politics or because of his religion, or because his mom didn’t hug him enough. This gentle pussyfooting around this in discourse has just got to stop. The effect forces political agendas on us, if nothing else it stalls our having sane gun laws ever. I actually understand how you’re trying to remind us that there are avenues that need to be pursued in the laws we enact for both. Clearly, prevention failed in this case… again.
I favor starting with prevention methods that would decrease the incidence of either/both as a starting point by heavily restricting access. People can take them case by case more easily when fewer of them can kill as efficiently.

I’m sorry, I am confused—English is a second language, you see—is it that ‘mass murderer’ is a gentler term than ‘terrorist?’ It does not strike me so, but I could be wrong?

As for my own motives for insisting on correct terminology, apart from inherent pedantry of it which I confess is a factor, I am motivated by the horrible excesses perpetrated in the name of stopping terrorism. I would not feed that particular beast without good cause.

Sure we can sit back now and apply these labels (and I don’t disagree with ones you have applied) but that’s not what happens in the news at the time when there is not enough information. The terrorism label comes out for certain types of attacks (or the “is this a terrorist attack” rhetorical device) and the shooting label comes out for others.

I get that sometimes you only have a little information (that someone was shooting a gun) and nothing about what those bullets did. That is okay for early reporting but they will still be calling this guy a shooter today, not a killer or anything else.

I think we do ourselves a disservice in how we cover these types of incidents by using neutral language that downplays the event.

You’ve got to be incredibly careful of bias in a situation like this. Everyone who sets out to murder a lot of people shares in some of that Vegas-shooter mentality. They all are willing to take one giant step further than people who nevertheless sympathize with their motives, albeit to a lesser degree.

Just like people were talking about above that the incidence of women mass-shooters is so rare as to be the exception that proves the rule, the Vegas shooter is a weird case in that he had no discernible motive that could be called political. He just wanted to kill a bunch of people. It was kind of mind-bending in that we have become accustomed to these incidents eventually coming down to a motivation leading the shooter to select his targets rather than indiscriminately shooting just anyone.

Thus the designation of “terrorist” has as much to do with the attitudes of the audience as it does the motivations of the killer. When an already-othered brown person acts out his frustration with over a century of Western interference in his homeland, that’s obviously terrorism to an audience composed of the Western people he targets. McVeigh is routinely called a terrorist, in part because he blew up a building rather than going on a shooting spree, and the uncommon means makes him stand out, and in part because he was motivated to attack the government, and lashing out at the establishment is a great way to get all the media against you regardless of political leanings, but to a small minority of Americans who feel some grievance towards the ATF (justified or otherwise), McVeigh wasn’t a “terrorist,” but just a guy who took things one step too far. Likewise, the difficulty we seem to have labeling the gay nightclub shooter a “terrorist” says a lot more about lingering American animus towards gay people than is generally recognized.

In short, it’s not strictly about color of skin; it’s far more nuanced, but in the same vein: Outside its strict dictionary definition, “terrorist” is a term of othering, and whether we choose to apply it, apart from perplexingly random incidents like the Vegas shooting, is one way or another an expression of our willingness to sympathize with the killer. The more we do, the more we overlook the motivation and view the act as an isolated expression of individual madness.

Quote from CNN
At least 12 people were killed Friday after a gunman opened fire at a municipal building in Virginia Beach. The attack was the [deadliest mass shooting in the US since November. 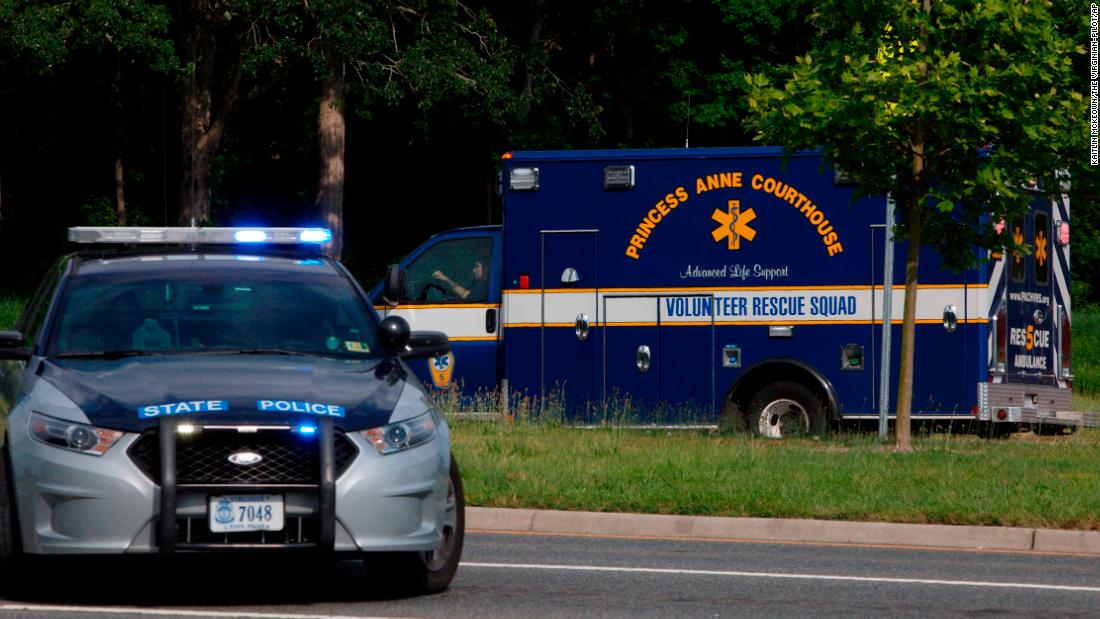 At least 12 people are dead after a shooting at the Virginia Beach Municipal Center. The suspect was shot and killed. Follow here for the latest.

Maybe I will vacation in Syria this year. I might feel safer.

I’m going to guess that a shooting at a government building might have political motivations.

*Editing to add a rant.
We don’t know the motivation yet, but I note that the building contains a planning and zoning department. When I was getting my degree in urban planning, part of our training was in how to deescalate some of the violent conspiracy theorists that will attend planning meetings. We had threatening notes left in the common area of the urban school and I still see Agenda 21 fearmongering on phone poles around town. It is far from unreasonable to think that politics are a likely motive.

The killer was himself killed by police.

He was an engineer, a fifteen year employee of the city.

His neighbors described him as “quiet” and noted his wife had left him several years ago.

I think that journalists hesitate to use the word murderer or killer because that is a judgement that a court makes and they will get into trouble / be sued unless they say “alleged murderer” which is awkward. I still think it is far better than the neutral voice used to report on these things currently however.

Honestly, the term terrorist holds greater cultural and emotional weight than mass murderer. I think we should use that weight and if, by using it and applying it to people we even hesitate to call “domestic terrorists” (like that conditional is anything other than code for “white”), we can break the perception that terrorists are defined as someone from a “shit hole country” then so much the better. This may have the effect of revealing the nature of the monster you refer to.

When terrible things happen, much of the media rushes to report every rumor and incomplete bit of information as soon as they hear it, and even with attributions and disclaimers of it being incomplete, people hear and internalize those tidbits. When more concrete information becomes available, they have trouble remembering what was speculation and what was fact and reconciling the two.

So I want the thank Xeni for omitting the speculation, the rumors, and the preliminary information and telling us only the trustworthy bits. There’s no point in polluting our heads with conflicting numbers of injured or dead or whether somebody thinks they caught a glimpse of the shooter’s skin color. There will be time to learn the facts. This is what journalism should be. Thank you Xeni.

Imagine if this horror had been the action of a Mexican drug cartel. Loser trump would be on every kind of media platform frothing at the mouth and flapping his arms about the horrors of it all. He would want to go to war over such an event. A white guy does it, he sends his thoughts and prayers to the NRA hoping no one will talk bad about them. Just as bad that our media doesn’t use the words cowardly or inadequate in describing the POS murderer who stole so many lives. The rest of the world must be disgusted with us. Our own disgust should be obvious at the voting booth but it never has had any effect to date. I agree with docosc, if we can’t touch the NRA and other gun freaks after Sandy Hook we never will. Pathetic.

Can someone explain to me why we don’t call these terrorist attacks or murder/killing sprees or something?

Terrorism is politically motivated violence, and I get the impression that most American killing sprees are driven by personal misery and hatred. I do agree that ‘killing spree’ makes more sense

Can someone explain to me why we don’t call these terrorist attacks or murder/killing sprees or something?

Well for one thing terrorism usually has a political aim:

Terrorism is, in the broadest sense, the use of intentionally indiscriminate violence as a means to create terror among masses of people; or fear to achieve a religious or political aim.

Stephen Paddock’s 2017 attack that killed 58 people was ‘all about doing the maximum amount of damage’, said special agent

And it will be a guy. Always.

The rest of the world should be disgusted with us.