These are beautiful, but it’s hard to imagine them mass-produced.

So, is there no single Japanese word for “joinery” that encompasses these techniques in general?

The two that are bog-standard joins in Western cabinet making are showing, but the two more interesting ones do not. 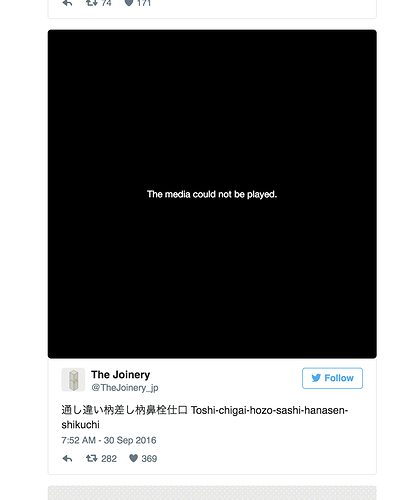 It’s ok, though, the Twitter feed has lots more.

I understand these joins outperform western building techniques when it comes to earthquake resistance.

There is a strong advantage to the slight freedom of movement afforded by a lack of adhesives.

Really? Because… I dunno. I love the idea of them being hand made but I think there’s little that couldn’t be extruded 3D printer ( albeit in a less lovely and decidedly non-artisan fashion ). And that’s pretty neat.

Japanese joinery is wonderful, and animations thereof also. Thanks, Corey!

For those that don’t know, these sorts of techniques were known and used by Europeans as well as other Asian cultures, too. They are not unique to Japan - although some of the cutting tools and techniques are, and the Japanese artisans have extremely high standards of quality and accuracy.

A while back I had to do some very major repairs to my barn, and the shattered corner post was repaired by cutting a fairly complex bladed and cogged scarf joint into it, that actually housed the existing floor beam tenons, and then the rafter plate got a stop splayed and under squinted hook scarf. These techniques were in use in Western Europe by the early medieval era and were still in use in colonial America.

The best joiners I have ever seen used Japanese pull saws, English framing chisels, and German levels to create traditional American timber structures. So even though I personally am not so great at it, I use those tools also.