Mexico-US illegal migration has been at zero for 8 years, and other eye-opening facts

People probably already know, but it should be clarified that NET migration was basically zero. The amount of people leaving the US was roughly the same at the amount of people entering, so the total population of illegal immigrants from Mexico wasn’t changing. It’s not that NO ONE came in illegally, but rather, for everyone that did, someone else was leaving. The point is correct, that the population of illegal immigrants from Mexico didn’t increase, but the wording may cause people to misunderstand what was actually happening.

Most of that leaving occurred during the great recession. I’d be interesting to see what has happened to that trend post-recession.

Now I want to know what you said?

Given that this passed under the Reagan administration, I think even most Republicans would shoot down that proposal.

The Reagen-era Republicans were commie pinkos by today’s “True Conservative” standard. They may revere Reagan, but they damn sure don’t emulate him.

And the Obama administration has been deporting undocumented immigrants at a rate that makes every prior POTUS look soft.

You have to look at research and primary source data for evidence. This interview is just a high-level presentation of this guy’s findings.

Skepticism is great, but you’re kinda doing it wrong. Here’s the guy’s CV if you’re interested in doing the reading you’d have to do to actually rebut his research.

Good Samaritan law, which holds providers (including RNs) legally bound to give medical assistance to anyone they find injured.

I suppose that includes folks off duty? I don’t think I knew that. I imagine at times that can be quite a burden. Missing flights because someone in the terminal and what not.

Including off-duty. Fortunately, ‘medical assistance’ includes calling for an EMT and transportation.

A general note for this discussion: an immigrant can be undocumented, but they cannot be ‘illegal’. Illegality applies to actions, not persons.

Wait: there have been zero illegal immigrants entering the US since 2008? Not a single one? That’s amazing.

See @Nylund’s post above. ‘Zero’ in this case just means equilibrium—that is, the number of immigrants entering is equal to the number of those leaving.

But these are mere “facts” only suitable for theoreticians. Trump will base his policy on feelings, like a proper Amurican (that’s how I feel it should be spelled). And he’s feeling like there are millions of 'illegals" rampaging through the border and across Amurica (actual picture*), who must be stopped with an enormous wall that will magically spring from the ground, not requiring any funds to be built, that will solve this imaginary, er, serious problem. Also, Trump is totally going to stop all those goblins that are stealing Amurica’s supply of magic beans. 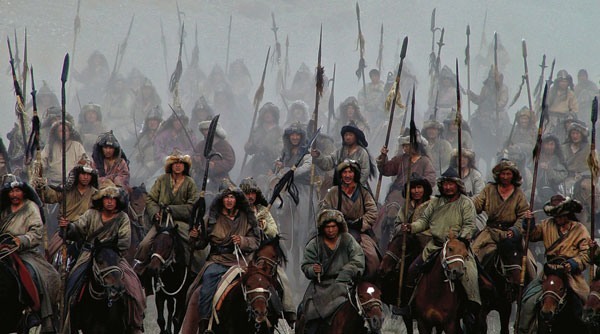 (May not be actual picture.)

You have to admit though, that was a horribly constructed sentence. I can see how one would think the other way.

That fiends! How dare they treat human beings like human beings! Oh, wait… this was under Saint Reagan, you say? Carry on! /s

Despite sounding like a left-wing policy, this rule actually bolsters a lot of rightist arguments about health policy. Anytime we try to do something about the uninsured (e.g. during the passing of Obamacare) people in opposition say “It’s fine that people are uninsured. After all, it’s not like they’re getting turned away at the Emergency Room.”

I’d be interesting to see what has happened to that trend post-recession.

We have had 50 years of the Immigration and Naturalization Act to study this. Illegal migration follows economic patterns. 50 years of catch and deport tactics have had no effect on this.

But it also should be noted that most nativist rhetoric on the subject is not only bullshit, but so old that it qualifies as fossilized coprolite. Much of what is said about current immigrant groups has been said against EVERY prior wave as well (“They don’t assimilate”, “we will be awash in foreign hordes”, “they bring crime”, “they bring disease”, “they steal our jobs”).

“Flat” in this case was consistently used to specifically mean “steady at 0 net flow.” An odd choice, but again, used consistently.

They may revere Reagan, but they damn sure don’t emulate him.

More importantly, it doesn’t give “free” medical services. It just says they can’t deny you emergency medical care based on ability to pay or insurance coverage. They WILL charge you though. And if you can’t pay, you can be sued, have it negatively affect your credit, etc. It’s not, “Don’t worry about paying us,” it’s "We’ll worry about the bill after we’ve prevented you from dying."

Oh, and what a bill it will be, too. If you have medical insurance, recall how you will see seemingly arbitrary prices (Provider Charges) for treatments, only to have them magically reduced (Allowed Charges) because you are insured? Example (from Google images) 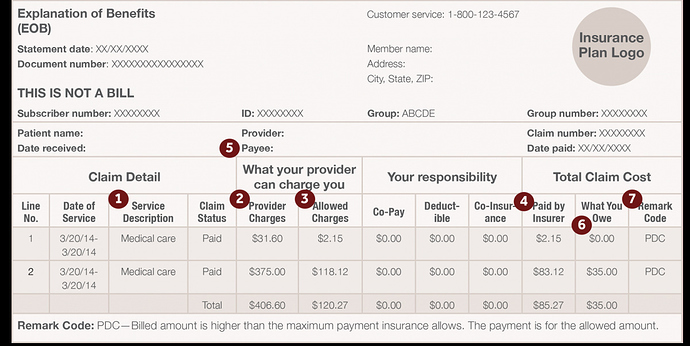 Column (3) Allowed Charges will be the STARTING POINT for dividing up the bill between your insurer and you, as deductables, in-network vs out-of-network provider, and annual maximums are considered.

If you’re not insured, you owe what’s in column (2) Provider Charges.

the Obama administration has been deporting undocumented immigrants at a rate that makes every prior POTUS look soft.

This is what makes the current round of anti immigrant rhetoric so hollow. But as Newt Gingrich helpfully pointed out last week, facts don’t matter as much as feelings (to him and his ilk): John Oliver: The “Theme Of The Republican Convention” Was "Emphasizing Feelings...

Oliver: Trump's Speech "Was A Symphony Of Bile And Race-Baiting"

The feeling that there’s an illegal immigration problem is much more politically useful (again to Newt, Trump, Pence, et al) than the meh facts of the situation.

Personally, I see it as a logical extension of the Good Samaritan law, which holds providers (including RNs) legally bound to give medical assistance to anyone they find injured.

Actually that’s not quite true. Good Samaritan laws offer basic legal liability protections for citizens who attempt emergency assistance regardless of outcome (eg: further injury or death as a result of that assistance). It does not obligate professionals such as doctors or nurses to render aid to a scene they happen to come across.

Good Samaritan laws offer legal protection to people who give reasonable assistance to those who are, or who they believe to be, injured, ill, in peril, or otherwise incapacitated. The protection is intended to reduce bystanders' hesitation to assist, for fear of being sued or prosecuted for unintentional injury or wrongful death. An example of such a law in common-law areas of Canada: a good Samaritan doctrine is a legal principle that prevents a rescuer who has voluntarily helped a victim in Go... What Is a Doctor's Duty of Care? - FindLaw

State laws govern the viability of causes of action for medical malpractice. The laws vary in terms of time limits to bring suit, qualifications of expert

A doctor dining in a restaurant has no duty to come forward and assist a
fellow customer who is suffering a heart attack. If the doctor merely
continues with his meal and does nothing to help, the ailing person
would not have an action for malpractice against him,
not-withstanding their harm. However, once a doctor voluntarily decides
to assist others or come to their aid, he or she becomes liable for any
injury that results from any negligence during that assistance.

I believe what you are referring to are “Duty to Resuce” laws which are not as common and actually rarely enforced.

A duty to rescue is a concept in tort law that arises in a number of cases, describing a circumstance in which a party can be held liable for failing to come to the rescue of another party in peril. In common law systems, it is rarely formalized in statutes which would bring the penalty of law down upon those who fail to rescue. This does not necessarily obviate a moral duty to rescue: though law is binding and carries government-authorized sanctions, there are also separate ethical arguments for...

Correct. And now I know why my instructor referred to our legal duty as the Good Samaritan law:

In the United States, as of 2009 ten states had laws on the books requiring that people at least notify law enforcement of and/or seek aid for strangers in peril under certain conditions: California, Florida, Hawaii, [14] Massachusetts, Minnesota, Ohio, Rhode Island, Vermont, Washington, and Wisconsin. These laws are also referred to as Good Samaritan laws, despite their difference from laws of the same name that protect individuals who try to help another person. These laws are rarely applied, and are generally ignored by citizens and lawmakers. [Wikipedia]

My nursing school was in a state with such a law, hence the confusion.