Comes back together again. Your spoon does not separate it into two distinct pieces.

If I put my spoon in, separating two points, and drag the coffee towards me, one point gets pushed towards me and the other may be left behind as coffee from the sides fills the void.

Or, forgetting about individual atoms: If I pour my coffee in first and my milk in second, so I have a layered effect (maybe a small, quickly-dissolvable barrier will help) then I have a set of milk points next to each other and a set of coffee points next to each other. Then suppose I then stir them together, and between any two milk points I get a coffee point, and vice versa. It doesn’t sound like creating a uniform mixture of milk and coffee is possible with a continuous transform: 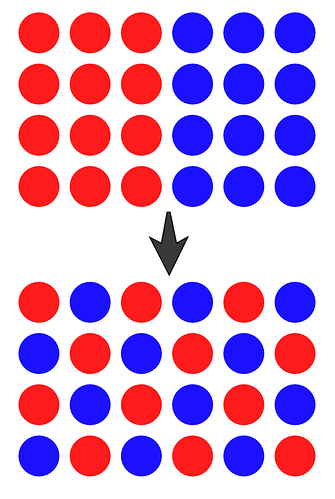 It seems to me that that kind of mixture is the definition of what “mixing a cup of coffee” is.

Now, when mixing a cup of coffee, the motion of the spoon, the water, etc. are all much less controlled than the fluid in this example, so in practice, it’s probably impossible to reverse. But I think this is the idea that they’re going for.

His argument doesn’t work if you consider the coffee to be made of individual atoms. He alluded to that but did not elaborate. If you are dealing with a system made of individual pieces, then continuous transformations are impossible. It is more like a grid, where you jump from point to point.

It is as if you had a self healing sheet and tried to cut it with scissors. As soon as the scissors pass through part of the sheet, it mends itself. The sheet is not permanently divided into two pieces, and because of that you can’t transform one piece of the sheet while leaving the rest untouched.

a massless manifold of genus 1.

How it’s made: liquid-concealing handles.

Is there a relationship between a fixed point and an eigenvalue?

My muddled sleep-deprived brain and half forgotten Lin. Algebra isn’t letting me think about this right now, but my intuition says yes.

Yes. An eigenvector is essentially a fixed point for a rotation.

Funny thing about this thread appearing now, I’m scheduled to give a talk on fixed points on Thursday.

As a topologist, I use this mug for tea in the office: For the topology enthusiasts out there, an accurately labeled coffee mug.

For what it’s worth, if the liquid really were in the form of a solid torus, then there need not be fixed points.

I think what you mean is an eigenvector of a rotation is a fixed point of that rotation.

Other eigenvectors (or any eigenvector with eigenvalue not equal to 1) are not fixed,
but the subspace they span is invariant (“fixed”).

Can you really say you have a museum if you only have one exhibit? Wouldn’t that rather be called a lame tourist trap?

We need tourists for it to be a tourist trap…

No, I wrote what I meant. I interpreted @jerwin’s question to be a request for validation of some dimly remembered intuition, not a refresher in linear algebra, and I tried to address that as succinctly as I could.

My coffee is usually not spherical, no…

But it is diffeomorphic to a sphere.

What, you didn’t want to write, in a comment, a minor treatise to include the case of complex eigenvalues or define projective space?