According to all the information available this was a single attack. Bad enough, but we need to hold on to reality. Could you please correct the headline to be more accurate.

Why now in particular? Don’t know.

Because of the General Election. Whatever the result, ISIS will claim that they influenced that result.

It won’t mean anything to us, but it will affect recruiting of the weak-minded to go plough vans into random crowds of people.

So, my theory: These were young men in their 20s who grew up in the South East, with a hurt ego, feeling emasculated and they were desperate to show the world that they were real blokes–who ought to be respected and are not to be messed with. It’s the same twisted logic that motivates the same kind of kids to be in a drug gang.

But one thing is certain, these were young men. There is a crises of masculinity and unless we help young boys to find ways to become part of the mainstream community–this problem will not go away. Have a read of this an insightful analysis of the Prevent strategy and it’s utter failure.

Let us suppose that indeed young poor men turn to violence because they do not feel that they have a future.

I don’t see young poor women having much future either. So why is that a “crisis of masculinity” and why aren’t young women turning to violence as well ( actually some of them do)?

After the Manchester bombing, the Union Jack was projected on to buildings in cities around the world (including Dubai, Abu Dhabi and Hong Kong) as a sign of solidarity. The same had previously happened with the French and Belgian flags. If it happened with the Afghan flag after Kabul, it didn’t make the news sources I typically read.

Less than a week until the general election so the question is what will our authoritarian overlord PM do to consolidate her power?

Agree a suspension of campaigning with Labour and the Lib Dems and then immediately start doing it again herself, for a start.

I deleted an earlier, illconsidered post. Let’s try again.
It seems to me that a factor in the current wave of attacks is an attack on women who are behaving in an “unislamic” way. The Manchester attack was directed at an audience almost entirely female - and there were a lot of Muslims in that audience, because Ariana Grande is popular with young Muslim women and girls. An observer last night saw the attackers single out a young woman and stab her in a frenzy.
We know how the Taliban react to the slightest challenge from women - Malala being an example. These attacks seem to be directed at places where there was a lot of entertainment going on and where women were free - both things hated by the Taliban and Daesh.
So while the election may be involved - Daesh want May to stay in power because that will help recruitment - I can’t help feeling that the more common Wahabist/Salafist obsession with control of women is possibly at the root of the actual targets.

It was reported last week that the Russians bombed a Daesh group heading towards Palmyra, and that the location was known because Syrians intercepted the group’s radio communications with the US arranging safe passage out of the US zone of influence. The role of the US government in covertly supporting Al-Queda, the Taliban and Daesh so long as they are attacking Sh’ia states and leaving Saudi alone seems to be fairly well documented. It’s time that stopped. The enemy of my enemy is not my friend, and all three organisations need to be remorselessly crushed - even if that means co-operation with the RF in the Middle East.

See amongst others the writings of Lenin, Mao, Ho Chi Min

Obviously the personnel of the School of the Americas need a better literary agent.

I don’t think the so-called West is as self-centred as many believe, but it’s still hard to find people anywhere on this planet who are interested in anything more than their immediate surroundings plus a buffer zone of current public discourse in their bubble
Media caters this, and reacts to their customers. Media with an educational streak beyond that exists for a niche audience.

I’ve seen multiple news reports stating that both the men with knives and the people in the van were wearing fake suicide vests and pretending they were going to blow people up. What an utterly bizarre, senseless attack.

Well, this is the second time it’s happened in a year, and there were those bombs 12 years ago; I’m not sure that’s a pattern.

For perspective, at one point the breathless news coverage was saying that there was a separate simultaneous attack in Vauxhall, but that turned out to just be a “normal” stabbing. Which is to say, other than the word “Allah” being mentioned, this event would barely stand out against the background noise of a city this size. It should simply remind us that London swats away bigger flies than this asshole on a daily basis.

And yet, I’ve had to respond, as graciously as I could, to text messages from family in Devon and Morocco asking if I’m OK. I know this is a dickish thing to say – which is why no one says it, which is why it’s a problem – but the way normal people react to this stuff, as genuine as their good intentions are, comes upsettingly close to cheering for terrorism.

I don’t see young poor women having much future either. So why is that a “crisis of masculinity” and why aren’t young women turning to violence as well ( actually some of them do)?

Pessimistic me says that more young woman are not turning to violence is because they are too tired, beat down and programmed to be more accepting of their situation whatever it may be.

My slightly more optimistic me says that young women have more ties to their community (through traditional roles of having kids or taking care of family) and less social pressure to provide for themselves and their dependents so they take it less hard when they fail to be able to do so.

Practical me says women just tend to be too busy doing what needs to be done to survive no matter how distasteful it may be to have the energy to channel to devote to terrorism as terrorism doesn’t solve the immediate problems of everyday living.

I know this is all stereotypical bullcrap.

It could be that ISIS is recruiting men to be soldiers and women to be sex slaves, but what do I know?

As Western liberal democracies, we can certainly do better in the areas of providing education and opportunities for young people. Unfortunately for the UK, these are not priorities of the Tories, whose election prospects were just markedly improved by these violent losers.

Why is this happening in London so much lately?

Four factors off the top of my head:

Perhaps the question you’re asking is “why is this happening in London more than other cities in other countries that meet the above criteria?” I’m trying to figure out that one myself.

[1] As to why males have a higher suicide rate…patriarchy, neurochemistry, we don’t know for sure. Probably a bit of both.

but the way normal people react to this stuff, as genuine as their good intentions are, comes upsettingly close to cheering for terrorism.

And this is why here in Norway Breivik was, and is, treated like the ordinary murderer he is. The Norwegian government resisted all calls to treat him as somehow special or to change the law based on the event.

[1] As to why males have a higher suicide rate…patriarchy, neurochemistry, we don’t know for sure. Probably a bit of both.

polarization helps the people at the top of the economic chain, and no one else.

For Ahmad, the vigil was an experience that brought people together.
“People were approaching us, hugging us,” Ahmad said. “It allowed us to show the local community and world at large that terrorists have nothing to do with Islam.”

But but that doesn’t match what Faux News says!!

I would say another word, but I don’t want to offend anyone here…

Bah, they just need to man up, walk it off! Be like John Wayne and blah blah crap that red pill dipshits vomit out enough…

I agree with you, people need to help these men now to prevent issues like this in the future…

It seems to me that a factor in the current wave of attacks is an attack on women who are behaving in an “unislamic” way.

that’s more accurate than you think.

To paraphrase one of my favorite Sam and Max quotes from the old Lucas Arts game, “No one I know or care about lives in Kabul.”

that’s more accurate than you think.

I’ve seen multiple news reports stating that both the men with knives and the people in the van were wearing fake suicide vests and pretending they were going to blow people up. What an utterly bizarre, senseless attack.

Not bizarre or senseless. The idea would have been to deter anyone from stopping them for fear of being blown up.
The possible implications include:
-Daesh is running out of explosives - unlikely
-Daesh is saving explosives for a really big attack - worrying
-They expected to get away and were not suicidal attackers, so the fake bomb vests were there to prevent apprehension.

Daesh has recruited engineers, computer scientists, chemists and presumably psychologists. We have to assume that none of what they do is senseless. Sadly, if anyone has the idea that any of the professions are immune to this kind of thing I have a few words for you - Wernher von Braun and Dr. Mengele.

There’s also the issue of how many male deaths in driving accidents may actually be suicide attempts that were not recognised as such, e.g. “lost control of the car”.

Some people believe that they get extra points for horrors committed during Ramadan. 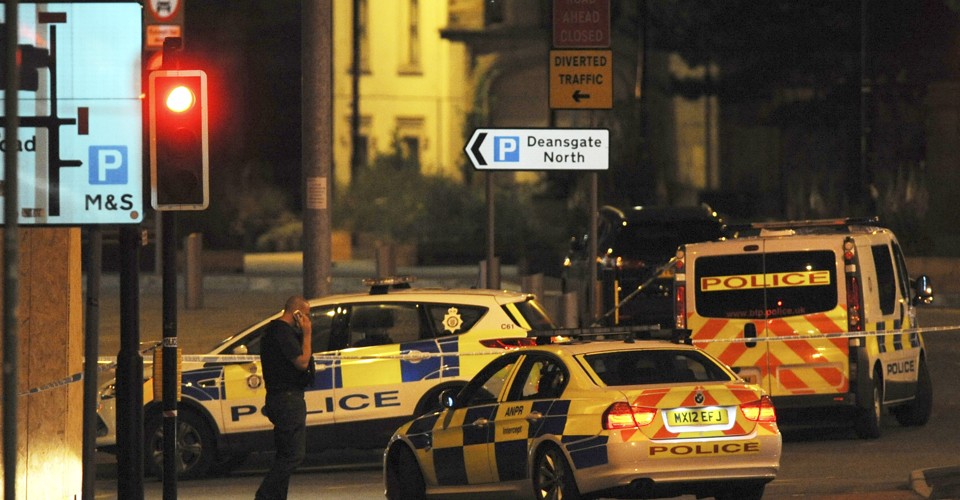 “What of the person who spends the sacred month of Ramadan oppressing people and killing innocents?”

They aren’t stabbing people in bars in London, are they? Just stuff in the street, which is really hard to defend against because if someone is going to stab you they don’t let you know until it is already happening. It isn’t like West Side Story where everyone whips out a knife and dances around. Though it if happened in a bar, I imagine some patrons would at least pick up bar stools for defense after the initial stabbings took place.

And if one is using bombs or vehicles, other than not being in the way, you can’t really defend against that. A guy in NYC off his meds ran over a bunch of people near Times Square.

The fact of the matter is, unless you go through impractical lengths, you can’t ever be safe from a sneak or surprise attack 100% of the time. You can have some level of increased preparedness, but it still isn’t always enough.