and police are human beings, who are just as flawed as you are.

No. Not at all. The Police have a lot more authority than I have.

and the standards of their conduct must be higher than you, I , or the people they interact with. And the penalties for failing, greater too.

It’s not just some job. It does ruin people. It would wear a lot of people down. Bigger scarier trucks will not help with this.

And the job itself can destroy the people doing it. Look up police suicide statistics. Or go spend a day at 26th & California, in the courthouse, not the jail. The people cops have to deal with day in, and day out would wear anybody down.

It’s partly their own fault. bet the suicide rate and stress related issues of US cops vs european cops is way higher/ more serious. The attitude of US law enforcement toward citizens and vice versa is the problem. If you expect violent, unreasonable, gun happy LEOs, you act accordingly.

From an outside perspective the way US law enforcement behaves, the attitude they present and the expectations they induce is total alien to those living in western Europe. Police encounters in the US seem like highly ritualistic affairs, with an atmosphere of authoritanism and suppressed violence. Deviate from the prescribed protocol and violence ensues. It seems like an alien element in a society that likes to see itself as free and democratic.

Over here the police uses violence as last option, is friendlier and presents itself as “citizens in uniform”. I was told by friends to not ask questions when having an encounter with LEOs in the US, just do what they say. Here it’s common to argue, ask question, express annoyance without getting humiliated or hurt in return. In my life I never saw a police officer draw his gun or even put his hand on it.

I can only guess the reasons for this difference. The strictly adversarial legal system in the USA may be part of the problem. Law enforcement is attached to the prosecution side, behaves accordingly and therefore is not seen as neutral. Police procedure in the USA further supports this - e.g. police here as opposed to the US is not allowed to trick or lie to you to get a confession. In Germany we have an inquisitorial system in which even the public prosecutor has to search for/and present exculpatory evidence.
Another reason is probably the glorification of violence in the US society - the Wild West mythos is still strong. This macho attitude permeates US foreign policy and shows in domestic issues too - gun culture, death penalty and police violence to name a few.

Just to take a step back here:

Who makes these Bearcat things that the DHS is so kindly granting zillions of dollars to towns to buy? What else to they make? What else is the DHS and DOD giving away at massive cost while your economy burns? Who profits from that?

If you can’t afford to educate your kids, but your micropolice departments are getting armored vehicles with grants from above, you need to ask who is making the profit.

No. Not at all. The Police have a lot more authority than I have.

And that makes them less human, and less prone to human flaws? Nonsense.

and the standards of their conduct must be higher than you, I , or the people they interact with. And the penalties for failing, greater too.

By law, I think that is the case. Police do have standards of conduct higher than civilians, and greater penalties for failing to meet them. Whether those standards are applied is another matter.

Bigger scarier trucks will not help with this.

I agree with you completely, in the case of Concord, NH. L.A., Chicago, or New York may be a different matter. A not-a-tank-armored-vehicle may occasionally be necessary to get police close-in in a sniper/hostage situation.

All that said, it is, indeed, troubling to see cops playing soldier, on the off chance they might have to fight some Al Quaeda guys with RPGs and AK-47s out at the mall. 'Cause terrists! 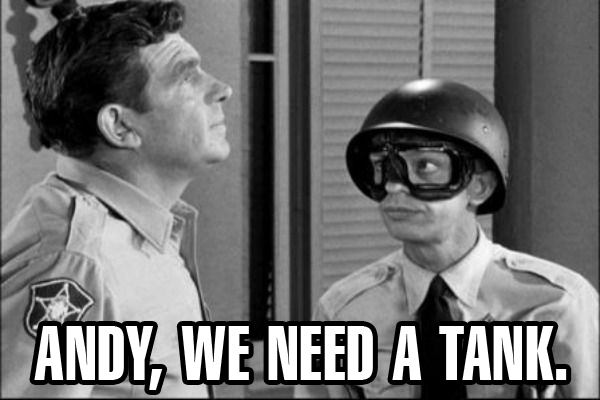 Well, keep in mind that in the USA, rich people can own tanks (real ones, not APCs). I am totally not kidding. Maybe the cops could just borrow one, if they really needed it.

Two years ago mentally unbalanced kid walked through my small quite town carrying two AK-47s shooting at houses and the police.

ST. CLOUD - David Alyn Penney was dressed for war - or a teenage video-game fantasy. Young enough to still be battling acne, the 18-year-old stood tall in the middle of Alabama Avenue...

Except a Lenco Bearcat is not a tank in any way, shape, or form.

It’s an APC or armored personnel carrier, a vehicle whose sole purpose is to transport people from point A to point B while shrugging off small arms fire. It has a roof hatch with weapon mount and gunports, but it comes with no weapons itself.

Sure, it’s a colossal waste of money, the police department has no real need for it, the local population was deadset against it, and it is certain to both further inflame public opinion in the future and escalate the sort of delicate situations the police intend to employ it in, but it isn’t a tank.

Tanks have treads. (And turreted main guns, but the treads are the important distinction separating them from other AFVs, or armoured fighting vehicles.)

And that makes them less human, and less prone to human flaws? Nonsense.

Not at all, I meant that their human flaws are made larger. They will fail to the level of their training, which is also human.

We seem to agree that the quarter million dollars could be better spent on the officers training and mental health rather than just their ego’s.

Wait, what? Since when are armored vehicles an appropriate response to a nut with two AKs?

I think a single sharpshooter with a scoped rifle would be cheaper, quicker to deploy, more likely to succeed, and do remarkably less collateral damage.

But if you want to go completely over the top, why stop at an APC or tank? Take off and nuke the planet from orbit! It’s the only way to be sure.

The point is you never know what will happen no mater how small and quiet the town is a really silly argument.

At least as long as they aren’t pronouncing it “con chord.”

I think I must pronounce chord differently to you - isn’t it the same as cord?

Well, I’ll agree that since you never know what will happen, buying a specialized military-style vehicle that would only be necessary in very specific and unlikely circumstances is indeed really silly.

As an aside, in the UK, not only can people buy tanks, but they are street legal. The steel treads just need to be replaced with rubber treads.

The tank’s covered through a classic military vehicle insurance policy, it’s taxed at £165 a year, it’s MOT exempt and runs on unleaded fuel. But costs about £300 to fill the tank.

[quote=“The Daily Mail”]
Stephen’s neighbour, Mike Kennedy, said: “When we saw the tank we thought it was police coming up at last with a real response in dealing with anti-social behaviour in the town.”[/quote]
… which IMHO points towards what the squares, finks and crypto-fascists want the cops to do with these things: finally run over and machine gun those pesky skateboarders, graffiti vandals, and smelly homeless. I mean, look at this society! Which sane person wants the cops to have a tank, when those lovely neighbours are always on the jump to call 911 whenever you are having a party, or when they see a foreign-looking guy standing on the sidewalk?

can’t we send them some of these instead? The binturong (/bɪnˈtuːrɒŋ/ bin-TOO-rong) (Arctictis binturong), also known as bearcat, is a viverrid native to South and Southeast Asia. It is uncommon in much of its range, and has been assessed as Vulnerable on the IUCN Red List because of a declining population trend that is estimated at more than 30% over the last three decades. Although called 'bearcat', this omnivorous mammal is related to neither bears nor cats but to the palm civets of Asia. It is a monotypic genus. Its genus name Arctic...

(fuck me I hate the use of “Homeland”, probably most of all since it came from Our Lady of Perpetual Dickheadedness, GWB)

I TOOOOOTALLY need one of those Bearcats!!!

You mean ignore the hyperbole so we can bash law enforcement?

Calling out the corruption of any institution isn’t bashing its entire existence.

I’m pro-police overall. I’m just not down with some of the corrupt ones and the direction the leaders are going with militarization. Though, you may be right that it would be better if more of us pointed out the good that cops do along with the bad.

you sure as hell don’t want to be without them.

I think cops are often extremely under-appreciated. They risk their lives for others and deal with stress that most people can’t even comprehend, much less cope with themselves. I also think they’re underpaid. Along with firemen, I think they are amazing people (for the most part) and they have all my respect.