I put that envelope under that garbage."

I think that what struck me most was the fact that there are homeless in Japan too. It seems as if every country in the world, including the U.S. has now sunk to third world status.

Japan has had a big homeless problem for many years. Many of them are former salarymen and they still wear their suits and dress shoes but sleep under blue tarps

Ought to have taken it to the Tender Branson Sensitive Materials Sanitary Landfill.

Drew, I am an old fart. While I agree that poverty has always been a problem, it is much worse, at least here in the US than it was when I was younger. I am acutely aware of watching the homeless population grow and spread over the years. Things are much worse now than they were in the 60s and 70s, but then of course that is documented in the records of the distribution of wealth from those days until now.

In this case, the “garbage” may have consisted of a goodly number of[quote]8 by 10, color, glossy photographs with circles and arrows and a paragraph on the back of each one.[/quote]

Agreed, Paul, being an old fart north of the border myself. At least part of it up here was when they started chopping beds in the mental institutes during the '80s - there were definite pluses to the reform of committal procedures that went with it, but the main effect was to put a slew of mentally ill people on the street. I don’t know if similar happened in your country.

Part and parcel of the same thing, of course: shifting money from “useless people” to, um… other places.

I would think a spanking would be in order.

If by “less fortunate” you mean “teenagers”, yes.

If by “less fortunate” you mean “teenagers”, yes.

Initially read this as ‘pork’ dumped. No idea what that says about me!

There’s tons of them. The government says “what homeless people?”. Since the government pretends they don’t exist there are few or no services for the homeless. Japanese society ignores them. It’s painfully sad. You can see heaps of homeless people around the harbour side in Asakusa, but you can find them all over any major centre like Shinjuku and there’s a couple of encampments in Yoyogi park.

PS: Manga is not pr0n

Not true. See here and here and the full text of the 2002 law which specifically addresses past problems getting the homeless off the streets and where possible employed.

Since the government pretends they don’t exist

Eh, may be true only for certain values of “ignore”. Here’s a pic I took the last time I was in Tokyo in 2010, of homeless camping out in the subway beneath the Shinjuku Metro Government Building (i.e. the Shinjuku city hall) before a big storm: 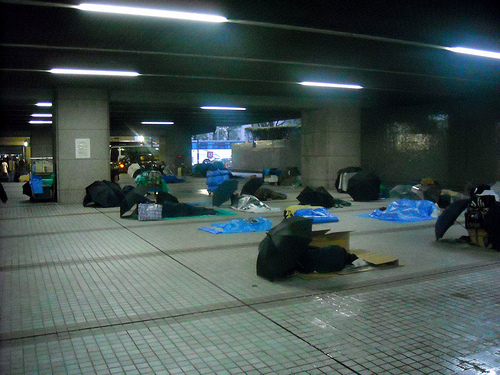 I don’t know what the official status of this encampment was, but a difficult situation to ignore if you have to pass them on the way in and out of your work in city hall every day.

On my two visits to Japan, I saw homeless tucked away all over the place — once I realised that the tidy collections of cardboard boxes and umbrellas I saw in subways and parks were actually homeless people cocooning themselves, and not collections for recycling: 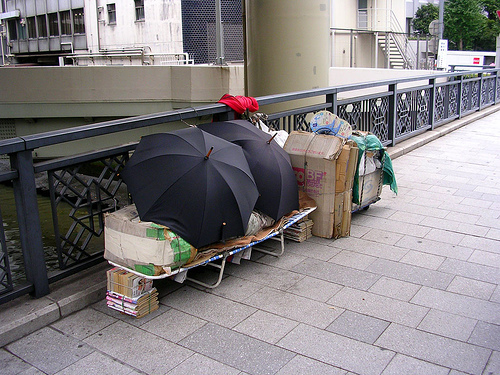