Video: Why homelessness in Japan is different than in North America

Do the Japanese police chase them away, abuse them, steal their belongings, or arrest them for “vagrancy”?

From what I’ve seen, not so much. But at least in Nagoya where I’ve spent the most time, they tend to gather them together where there’s a bit of shelter (like outside a train station), and the police stand watch all night to make sure they stay put.

So this is the opposite of freedom?

Really interesting video, would love to see more of this series.

Those bastards. How dare they. /s

Speaking honestly, i imagine that being homeless in Japan must still be difficult. The pressures they deal with on a daily basis are just going to be different than what the homeless here have to experience. It does seem to be more humane in some aspects than what i see here in the US though.

On that topic: what’s their mail situation like, does anyone know? One of the big barriers to being homeless in the US is that everything requires a permanent mailing address and oftentimes proof of residence, like a bill addressed to the, well, address that you purport to live at.

They take their shoes off before they enter their hovel, I like that.

This is always the first image I think of when the subject of homelessness in Japan comes up. I shot it in a park near Osaka Castle.

The publication, which can be downloaded for free, contains an interesting photo series focusing on just one peculiar thing you find everywhere in the Japanese capital: the common blue PVC plastic construction tarp. “I doubt you could spend half a day in any of the wards of central Tokyo without tripping over a dozen of them”, Greenfield explains. The ‘ubiquitous tarp’ has many roles, which are profoundly investigated by Kim. 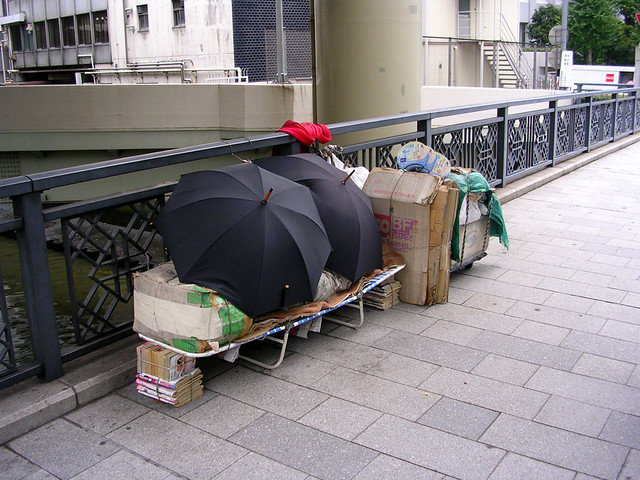 I didn’t know what to make of the scene at first. Was it a pile of cardboard for recycling? What was it doing in the middle of a bridge?

I encountered more, here and there, and eventually figured it out. Yokohama: 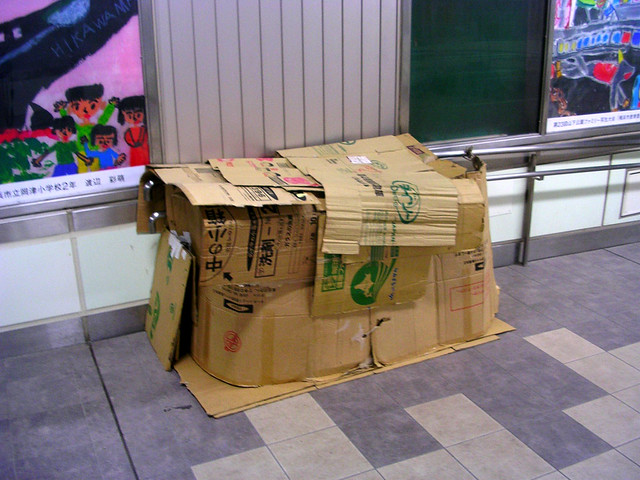 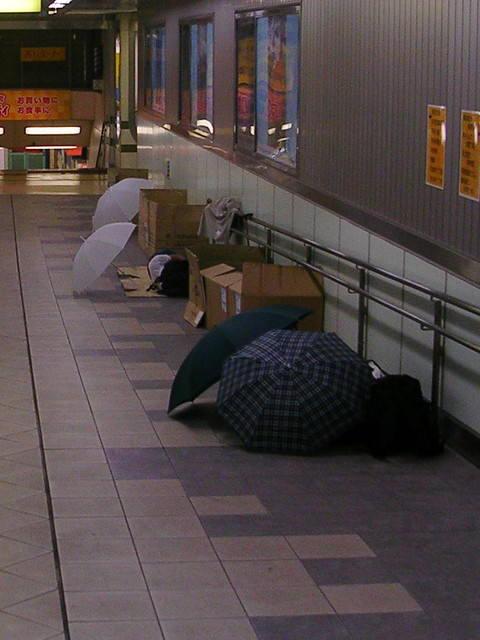 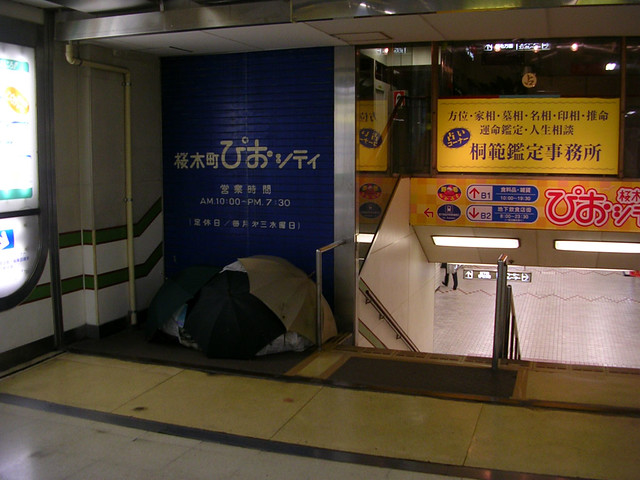 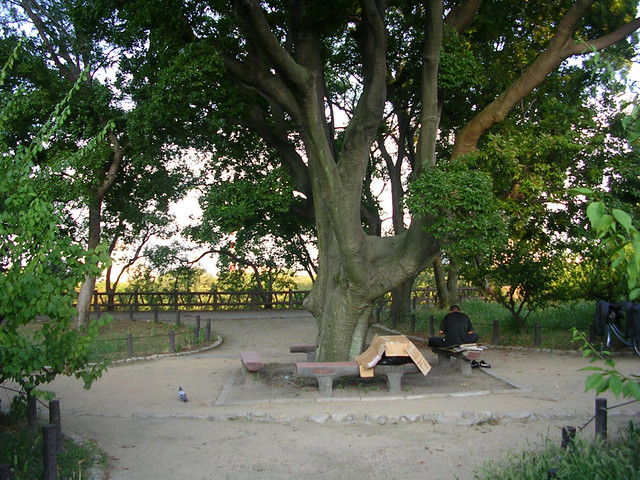 That’s a big problem in Japan too. I have heard stories of some homeless people using the address of an internet cafe where they are semi-resident in order to be able to fill in various official forms.

(Free drinks, showers, internet access for less than the price of a capsule hotel)

It’s difficult to follow this video when other video ads are playing simultaneously. The alternative is that I go to YouTube watch video there and don’t see your ads at all.

It’s difficult to follow this video when other video ads are playing simultaneously. The alternative is that I go to YouTube watch video there and don’t see your ads at all.

You seem to need a good ad blocker.

That’s one of the times I find “homeless” to be an inaccurate description. That guy has a home. It’s not a house, so much, and it’s not socially/legally approved, but it’s a home.

About 15 years ago or so, when I lived in Ventura, CA, there was a floodwatch out and they were trying to evacuate the homeless population from the Ventura River (because in California, you can live in a riverbed for years with no issues.) Some of these people had built houses out of scrap wood and sheet metal over a few years. They had homes, and they had to leave them.

because in California, you can live in a riverbed for years with no issues

Dude, right? I have seen these folks in San Jose (or nearby) along the Gaudalupe River. They had nice tents, and appeared well dressed, and going nowhere soon. Could not believe it. I bet they were coders, too. What a life! Super jealous.

It’s true. All of the blue tarp structures in this area were well kept, and seemed nicely put together. One of them even had a high walled courtyard attached to the living space. It looked like a big blue cube until I passed by and saw through the entry. Probably not a life anyone chose for themselves, but they seemed to be handling their situation with a great deal of dignity.

You seem to need a good ad blocker.

OT: On the rare occasions I browse without an ad-blocker, the web seems completely unusable these days. Which makes me wonder if today’s web designers assume we’re all using one. Which is odd, if you stop and think about it.