It might seem really weird that both Trump and the NRA have made this one of their favorite arguments about Hillary – claiming she’s “going to get rid of the 2nd Amendment” and that she’s a “gun grabber” – despite the fact that she’s never said or done anything of the sort. But one of her campaign planks is to get rid of laws that protect the gun industry from being held accountable for anything at all, really, and their lobbyists’ cash is thick and fat and flows freely.

[quote=“doctorow, post:1, topic:83180”]The ad then shows the back of the woman watching a clip from Clinton on the plane where she says, “I fully appreciate how hard life is for so many Americans today.”[/quote]I suppose the implication was that if she really appreciated “how hard life is”, she’d understand why so many Americans require easy access to deadly weaponry at all times?

Crooked Hillary will leave me defenseless against my imagination!*

This ad is a result of the thousands of bone-headed blog posts and editorials by well-meaning but blindered liberals who have called for “getting rid of guns” over the past year or so. Clinton does not have to have a specific position - all that is needed is that liberals do. And it is stupid to overreach in an article for what is impossible under Constitutional law.

People on the left (and I am to the left of most people on the left) need to realize that the right to own and use pistols and hunting guns AND Ar-type semiautomatic guns (that look like, but are not assault rifles) by individual citizens is Constitutionally protected now. The three latest Supreme Court cases on the topic are good law, not bad law. The precedent will stand.

God, guns, and gay is what gets bone-headed rednecks to the polls. To whatever extent this ad is successful, we on the left are partly responsible.

The Attorney General in Massachusetts made a “interpretation” of the state law which essentially outlaws all semi-automatic rifles, and reserved the right to retroactively prosecute people who own them (her response as to whether she would was ‘not yet’). She did this on the last day before the state legislature recessed, then showed up at the DNC, hoping to impress Hillary with her proactive approach to confiscating guns and prosecuting previously law abiding citizens. She is no doubt fishing for a federal appointment, and hoping to show that her overreach in reinterpreting the law makes her a prime candidate for a cabinet position, where her gun control antics will be an asset.

my assumption is that the Republicans have calculated that the only way they win is if Hillary is assassinated.

I mean I don’t think there is necessarily a conspiracy about this, all it requires is a bunch of evil people to conclude that their positions would be improved if one person died.

[quote=“rasmussen_bryan, post:8, topic:83180”]I mean I don’t think there is necessarily a conspiracy about this, all it requires is a bunch of evil people to conclude that their positions would be improved if one person died.[/quote]I like to think that people who can be persuaded to come to this conclusion lack the intellect to actually follow through with a successful assassination attempt on a high-profile target, and that the people with such an intellectual capacity are likewise unlikely to be persuaded.

Found this, which really says it all: 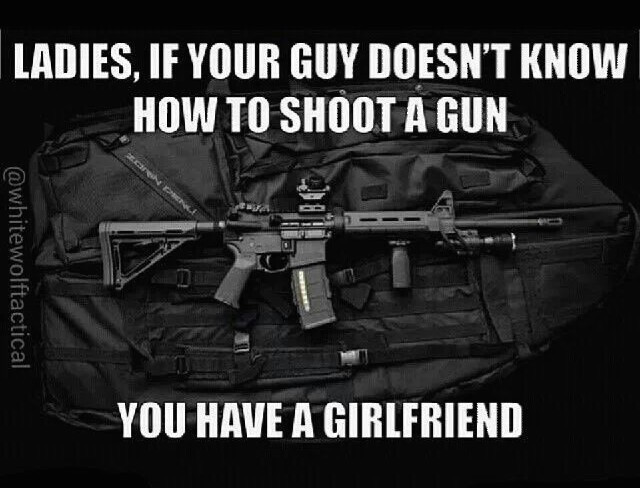 I haven’t ever seen any stats on the intellectual capacity of people assassinating high-profile targets, but just thinking of the ones found in American history it doesn’t seem like they’ve been especially clever people.

This ad is a result of the thousands of bone-headed blog posts and editorials by well-meaning but blindered liberals who have called for “getting rid of guns” over the past year or so.

Yes and no. Remember back in 2008 and 2012 when the NRA.GOP.TEA shrieked to the heavens that Obama would show up at your house and take your gun away? This is the same song, different verse.

it’s true, because if you are with a guy who spends all his time bragging about how he knows to shoot a gun and really likes these kind of graphics you end up not having any girlfriends after a while.

I think it goes back even further than that. I’ve known people who believe Bill Clinton was bent on taking their guns away when he was still in his first term. I had a family member who was telling complete strangers to ask their representatives to vote against the Brady bill because something something patriotic duty.

They’d still have baseball bats, knives and pressure cookers, which the NRA assures us are interchangeable with firearms.

It’s, uh, “interesting” that at at time when most folk are fleeing the incipient Drumpf trainwreck, the NRA are sprinting towards it.

These scare campaigns are a waste of money. Eight years of Obama ravenously coming for your guns like a relentless gila monster hasn’t done anything. That’s because the only people who really can come for your guns is Senator Wotsitsface and Congressperson Whichemacallit, because the president cannot make law.

Unless President Obama wasn’t actually coming for your guns, and it was always gun stores and ammo manufacturers feasting on the paranoia of suckers.

Hell, the fed can’t take away your gun even if its manufacturer screwed things up:

Hell, the fed can’t take away your gun even if its manufacturer screwed things up:

I’m convinced the gun rights crowd is now dominated by people who are turning their own cause suicidal with paranoia.

This ad is a result of the thousands of bone-headed blog posts and editorials by well-meaning but blindered liberals who have called for “getting rid of guns” over the past year or so.

Or the complete tone deafness of ammosexuals every time there is a mass shooting or suggestion to use methods which would improve law enforcement efforts to keep illegal guns off the streets. Couple that with fucking stupid excuses for irresponsible behavior with firearms which promote accidental gun injury and deaths. Combined and it shows that nobody in their right mind, especially responsible gun owners should be taking the NRA seriously as advocating for their interests.

Remember by saying “the guvmint will take my guns!” you are also saying that law enforcement should be hobbled and ineffective in its role in protecting the public from “bad guys with guns”.