It’s comforting to know the government actually believes its own paranoia and it isn’t generating only to manipulate the civilians.

I am bummed, it used to be us commie Jews who were so damn interesting to the FBI back during the red scare.
Enjoy your time in the microscope slide guys!

Doesn’t seem entirely crazy that you’d want to check up on someone who failed to declare their links to a terrorist fundraiser. http://www.salon.com/2004/06/22/gill/

Yeah, his connection to Grover Norquist is especially troubling.

Doesn’t seem entirely crazy that you’d want to check up on someone who failed to declare their links to a terrorist fundraiser.

More info on this suspicious guy: 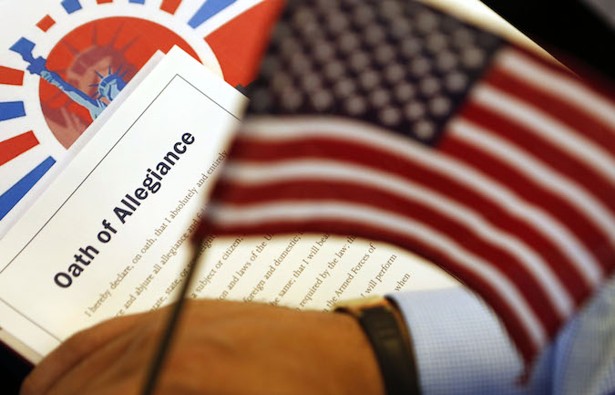 What a Muslim American Said to Defend His Patriotism

We all no government officials can’t be traitors.

By that logic, maybe we need to spy on you?

What, you’re innocent? You’re not a traitor? That sounds suspicious.

Sounds like you’re trying to deflect from yourself on others and I’d say that make you ripe for deep surveillance. If someone fudges with your bank account in the process, we’re sorry, but we have to protect freedoms. Actually, we’re not sorry, because… freedom.

Are you a traitor? Let’s find out. Time to start watching you very closely.

Why do you know so much about federal judges? What’s your interest in transsexuals? So many questions we should get to the bottom of with you and your family.

“I was a very conservative, Reagan-loving Republican,” he says. “If somebody like me could be surveilled, then [there are] other people out there I can only imagine who are under surveillance."

Even a Republican could come under suspicion? Now that’s shocking - not like keeping an eye on the Dirty Fucking Hippie Party. Because we all know it’s only terrorism on the left. (The left, for NSA purposes, includes ultra-conservative Muslims, but not ultra-conservative Christians. Make sense?)

Meanwhile, speaking of the corrupt NSA…

To those of you out there who disengeniously said Snowden had other channels he could have taken within a corrupt organization like the NSA, here is yet even more evidence that was never the case:

A former CIA employee has revealed he was forced out of his job after trying to release historical documents under the Freedom of Information Act. Jeffrey Scudder discovered the files after taking up a position at the CIA’s Historical Collections Division, which is tasked with combing through agency archives to vet what can be safely made public. Scudder came across material on long-dormant conflicts and operations related to the Cold War. But when he submitted them for disclosure, he was accused of mishandling classified information. His home was raided, his computers seized, and he was forced to retire. Scudder said: “I submitted a FOIA and it basically destroyed my entire career. What was this whole exercise for?” The case has raised comparisons to complaints from National Security Agency whistleblower Edward Snowden, who has said there were no adequate channels for him to raise his concerns about NSA surveillance.

This is, of course, already on top of these facts below as well. The story most of the corporate mass media would like us to ignore is that Snowden was already vindicated a long time ago shortly after his disclosures:

Oh, and as far as that ridiculous, recent Bill Maher episode goes:

Things got a little heated.

Bill Maher is talking out of both sides of his mouth. First he said Richard Clarke isn’t with the government (which I think confused Greenwald), but then Maher turns around and admits that Clarke was, indeed, a part of Obama’s government panel. Um, which is it, Maher? Anyone else notice that? He fudges and massages the truth to suit some of his negative positions (or allegations) against Snowden.

I like aspects of Richard Clarke as Maher does, but Maher is being incredibly naive if he thinks Clarke is being an impartial critic to represent only the truth as apposed to serving his masters who handed him and 4 others information that we can’t independently verify as accurate, complete, fabricated or not. And, once again, as Greenwald said, where are the dead Americans?

At that point we get Maher’s and Reickhoff’s disingenuous (or perhaps simply ignorant) retorts that we’d have no way of knowing if agents have been killed due to the leaks. That is a complete crock.

There was an interesting exchange on Bill Maher's show Friday night in which Paul Reickhoff and Glenn Greenwald on the topic of the consequences of the revelations by Edward Snowden, International Man Of Luggage. I admire both men to varying degrees...

Reickhoff sounded like an idiot arguing from ignorance and screaming over and over how Greenwald must prove a negative. What a dolt. Reickhoff also sounded like an idiot not understanding the relevance of how he referred to Daniel Ellsberg as basically being a hero when Ellsberg has already repeatedly said that he would’ve done things the same way as Snowden.

If Maher had stopped Reickhoff from repeatedly interrupting, shouting and bullying, we could have had a real debate instead of this fiasco where these two idiots (Maher and Reickhoff) tag team Greenwald in a game of screaming “gotcha!” instead of matters of substance that give a more accurate picture of the entire situation.

Boo, Bill Maher. You failed yet again at having a reasonable debate on Snowden leaks.