NY sees its first case of Polio in almost a decade, officials fear it has spread wide

I remember participating in some fundraising for March of Dimes when I was a kid in the 70s. I never expected to see polio return long after it was declared eradicated.

Yeah, like some here, the physical reminder was right in front of me in the 70s. A member of the church where my dad was pastor had a calf-to-ankle brace and an elevated shoe because of polio. She was a really nice lady who was able to break it down into a simple explanation for us kids, and I’m glad it wasn’t worse for her.

I did not see this in the initial coverage but apparently it had already been detected in the waste water last month. 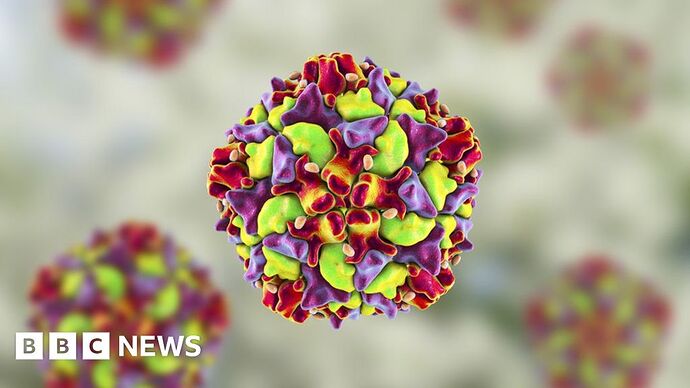 Health officials are urging vaccinations against polio after the first US case in a decade was found.

I started hammering the like button on your post but then got the following message, as the actress said to the bishop:

This really pisses me off!!

My aunt died from the complications of a life of polio, way younger than she should have. She caught polio back in the early 1960’s and died at the age of 60 after living in a wheelchair the majority of her life.

Polio should have been eradicated by now, but the fucking anti-vaxxers have kept it a going concern.

I saw it posted on a similar story elsewhere so went hunting for it. It doesn’t look to be signed so I’m not sure who the original author is but they certainly did a good job.

I think it’s an original as it has the white over dark blue “OK” button. Usually you would find a subtle tobacco burst on the back plate of the mid 60’s Japanese versions. Personally I like (thumbs up if you will) the Japanese tone even if it was considered a cheap knockoff back in the day.

I have a friend with post polio syndrome, it’s a serious problem. And it can show up anywhere from 5 years after you “get over” having polio.

About 1 in 200 people infected with poliovirus develop paralysis, according to the US Centers for Disease Control and Prevention. That means for the one case of paralytic polio to have arisen in New York—which was not linked to any international travel—hundreds of others were likely already infected.

This is the response to all the “it’s only one case, chill” people I have talked to. If there is on case of paralysis, there are quite literally dozens to hundreds of cases that look like a GI bug, or even nothing at all. The nightmare scenario we have all worried about is exactly this, that a rather indolent infection gets into a largely unvaccinated population and starts to brew. Like most vaccines, the protection wanes over time. This bastard could very well make it’s way into the broader population and start infecting folks who are vaccinated, but many years ago with the IPV (killed virus) vaccine, which is less effective but plenty adequate for for a population that does not routinely see the virus. Should that happen, it will rapidly get ugly. Much as we don’t like to think about it, public health is largely about playing with statistics. Maximizing benefit while minimizing adverse events. This is why the OPV (live virus) vaccine was abandoned in the US. To minimize adverse events, so long as the population is vaccinated. So. Long. As. The. Population. Is. Vaccinated. God, this makes me tired.

Not quite. This has a lot to do with the antivax sentiment in the Middle East (although the idea of vaccines as a Western effort to feminize little boys way predates this), true enough, but most folks here in the States are not even aware that this was a thing. And the NY polio is the vaccine strain, not the wild type. No, this is home-grown ignorance, not reaction to CIA shit.

There are anti-vax movements in many countries. Across Africa the idea that polio vaccinations were a western plot has been pushed for decades.