I’ll believe it when I see it

EDIT: Oh, I see the racist jab was removed from the headline. Classy!

…but when will they stop stopping and frisking folks for possession of too much melanin?

I sorta think they already had the option to not arrest them.

Isn’t the problem that they like using the option of arresting people, as long as it’s “those kind of people”?

My prediction is that things won’t change much until the NYPD formally lose the option of arresting people for possession of “personal” quantities of pot.

i believe it was a reference to the fact that arrest rates for drug possession are highly disproportionate. in the USA drugs law have been unfairly and disproportionately applied to minorities and been used as a way to target certain groups for the prison industrial complex, which is a really shitty form of modern racism, that this change hopes to address.

a poignant observation on reality rather then a racist jab…imho.

Depending on the jurisdiction an arrest is nearly usable as a marker for conviction, some juristictions get percentages in the high 90s, federal especially where budgets are unlimited. It matters not whether the search was illegal, the public defender has become the underfunded overworked arm of the prosecution use almost exclusively for managing plea bargains.
In real life a conviction is what happens for many people when the po-po doesn’t like the way they look, suspects them of no-goodnickism, or they fail the attitude test and they send them up to the DA to find something to charge them with.
It really matters if the cop is willing to deal with the paperwork and possible overtime, the laws and legal culture are already there.

Not at all the point I was getting at, which was the mayor’s statement that even arrests without conviction are somehow bad for one’s reputation. I have heard the same claim made by others who were unable or unwilling to defend it.

What you mention here sounds like a far worse problem. I will need to research trends in the arrest to conviction ratios of various jurisdictions.

And maybe resume research for my project of breaking random people out of prison just to undermine them.

First, it’s true that an arrest even with out a conviction can damage one’s life and livelihood. Take for example public housing; if a person is arrested for a drug crime such as possession, the entire family can be evicted from housing, even prior to a conviction.

What is a summons, and how is that better than getting arrested? (Not saying it is or isn’t, just, what is that?)

Not really. Just under an ounce.

Arrests are what shows up on all police computer checks, not convictions, at least on mobile units as I remember. The arrests will flunk you out of any backround check, I think you can get the record sealed by a judge though for good cause like juvie arrests, wealthy campaign donors, or war heroes.

Wouldn’t that depend upon what it was that people need to know about my background? I don’t understand what useful information can be deduced by this. I can sort of understand why some people might be interested in crimes of people’s past, but it seems foolish to disregard crimes they were demonstrated to do versus merely being suspected of. It seems capricious and pointless.

I prefer this article, which points out how laws passed 35 years ago were intended to have this very result. http://drugs.gawker.com/reminder-new-york-decriminalized-weed-nearly-four-deca-1656925761
#FuckThePolice

Most business subcontract the pre-employment drug screen and background check to a service provider. They use a database, think Lexis-Nexus(but I don’t think L-N stores arrest records), of arrest records from public records. So the cheapest and most discriminatory report, which most employers prefer, will only cover the arrests.
IMHO arrest data should become illegal to use, maybe even keep, once its utility for habeus corpus has expired. Only convictions should remain in extended public record, even then once the punishment is complete I support full civil rights including a clean record.
How can someone be rehabilitated if they are forever branded with the scarlet letter?
Even worse how can an innocent person stay ‘good’ when forced to exist in society wearing a false scarlet letter?

Not on the front page though… 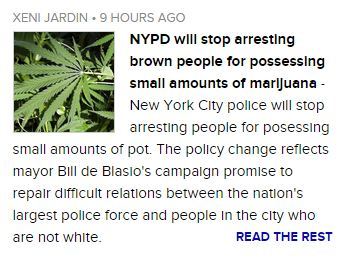 “a joint press conference” Well, they got that right, at least.

Agree. But I have to point out your ‘then/than’ error.
Sorry, but I’m seeing it everywhere and something compels me to speak out.