Just a note to those who wish to escape the Trumpocalypse by fleeing to Canada… You’d still be within drone range. While the Trump administration is going to be bad, terrible even, I don’t think that we’ll end up with the sort of internment camps that some of my friends predict. But if it gets that bad, heading north of the 49th parallel and learning the words to “Oh Canada,” won’t save you.

The moment when you realize the big bully on your block gets to ride your bike, and you have to let him, no matter what your parents said.

by fleeing to Canada

the proposed expansion of security power and new position on recreational marijuana are bad enough, even without Trump’s drones

Well, when Congress’ official position when you take power is to block every piece of legislation you propose, no matter what it is or who it might help (because, well, the dude’s black, you see), finding ways around that obstructionism becomes essential.

The drone and intelligence programs have been kept tightly under reigns, despite the alarmist rhetoric here. When you have someone who’s saying he wants to use them to destroy entire countries and lock down the internet, yes, it’s time to pull that power back in. 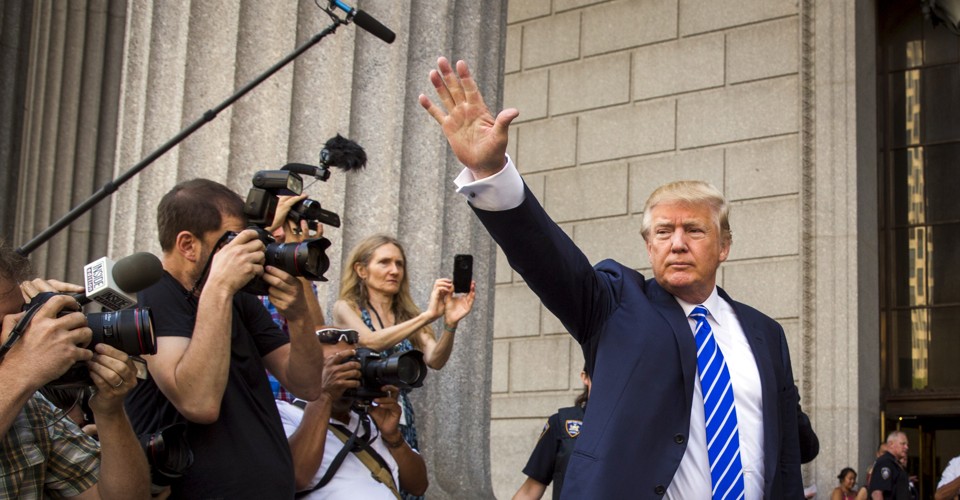 The Presidency of Donald J. Trump

“Relations with Mexico remain tense.” A dispatch from the future.

By the time President Trump raised his right hand and swore to preserve, protect, and defend the Constitution, the Constitution itself had been enlisted. In what Trump supporters called the “Christmas Coup” and what everyone else called a historic act of national preservation, President Obama signed into law a bill passed with overwhelming bipartisan support (with the exception of a few House Republicans and Ted Cruz, who abstained) which reasserted congressional primacy over the republic and stripped away the presidential prerogatives that had accrued over the previous century. In a talk at the Heritage Foundation, Chief Justice John Roberts, speaking only hypothetically of course, suggested such a law would survive judicial review. The liberals on the high court offered similar hints. The only source of debate was which parts of the law ought to be permanent and which should sunset after four years. You can imagine how that went.

The drone and intelligence programs have been kept tightly under reigns, despite the alarmist rhetoric here. When you have someone who’s saying he wants to use them to destroy entire countries and lock down the internet, yes, it’s time to pull that power back in.

The founding fathers of the US put checks and balances in because they didn’t really believe in the idea of just trusting the government not to be tyrannical. I don’t think the founding fathers did things right on that front, and I think everyone would be better off seeing it as the responsibility of the citizens to keep tyrants out of power rather than the responsibility of laws that tyrants obviously just won’t obey.

But when Trump does send a drone to assassinate someone who made fun of his hair, it will in substantial part be because Obama didn’t take a stand and say it was wrong for the president to have that power.

the proposed expansion of security power and new position on recreational marijuana are bad enough, even without Trump’s drones

But then you get lost in Trudeau’s eyes and everything’s good again.

But when Trump does send a drone to assassinate someone who made fun of his hair, it will in substantial part be because Obama didn’t take a stand and say it was wrong for the president to have that power.

But if Obama hadn’t stood up and said “we’re going to actually get something done, even if Mitch McConnell has literally broken the government by shutting Congress down,” isn’t that giving up? I’m not saying I support his drone or intelligence-gathering programs, by any means, but as a Constitutional lawyer I’m sure he knows all about checks and balances; I don’t blame him for being frustrated at Republicans for making checks and balances impossible to achieve.

Don’t you dare defend what Obama did. This is not making an end run around an obstructionist congress, this is giving the executive branch to kill anyone, anywhere, at any time, for secret reasons. This is not a minor eccentricity of policy, not a blemish on an otherwise perfect record: this is utterly unforgiveable and in a just world he’d be tried for murder.

The one single solitary bright spot of the Trump election is that people are finally waking up to what he did. There isn’t time to fix it, however.

The drone and intelligence programs have been kept tightly under reigns, despite the alarmist rhetoric here.

They have been but when the only limits on its use are the ones instituted by the president HIMSELF, that is a power that will INEVITABLY be abused. That is why we HAVE the different branches of government looking over each others’ shoulders. The root difficulty is that we seem to exist in a sort of grey area between peace and war that was not contemplated by the framers of the constitution. The extant to which we are in that area because the terrorism, or the cold war is inherently a grey area or that we are in that area because is is a useful ambiguity for certain politicians is an interesting debate.

I like Obama and really applaud him for many of his progressive policies, like wanting to decriminalize marijuana, his stances on gay marriage and LGBT rights, etc. But i feel like those were red herrings to distract people from him spending so much time and effort eroding the transparency of the government, going after reporters/whistleblowers, deploying cyberweapons and unaccountable spying on Americans, etc, etc.
I honestly don’t know what to think about Obama now that everything has been said and done. With that mix of great progress and terrible unaccountability.

How many people did Bush/Cheney/Rumsfeld murder?

the president’s powers should be drastically curtailed and made accountable and transparent.

I seem to remember that was one of the platforms he ran for president under. He promised transparency and a limit to presidential powers as well as a reduction in the number of armed conflicts. Many people voted for him based on that

The drone and intelligence programs have been kept tightly under reigns

By what measure? Do you consider murdering hundreds to thousands of innocent civilians as ‘tightly under reigns’?

Numerous reports during the Obama Administration––including at least one by a former drone pilot––describe a pattern in which a missile fired from a U.S. drone hits an area, bystanders rush to the scene to help the wounded, and the drone, still overhead, kills the rescuers. On other occasions, drones have struck at funerals of drone-strike victims Obama’s drone war is a shameful part of his legacy

It’s not clear that drones, which have killed civilians, are effective against terrorism.

How many people did Bush/Cheney/Rumsfeld murder?

Too many but I fail to see how that justifies further killing of innocents.

I was going to say how everyone on the left just got out the kneepads and excused away all the Obama administrations unchecked abuse of power with the usual weak-ass litany of excuses (racism! obstructionist GOP! it’s the right thing to do!), and then someone comes out and demonstrates my point perfectly.

Checks and balances are there for a reason. And a “Constitutional scholar” like Obama should know more than anyone why the limits exist on the executive office. Not liking them, or having a group opposed to your platforms is not justification enough for abuse of power. There’s an island to the south of Florida that demonstrates exactly what kind of system that results in.

Now all the dopes who excused away the years of Obama’s Constitutional dismissiveness, due process, civil rights, war powers, etc, are going to get all riled up and righteous when some new idiot has those powers.