I have an eInk word processor from Japan, better phrased, an eInk text entry device. Shadowing is a thing, even with area addressable refresh (which isn’t as good as the whole screen refresh). I get why a company wouldn’t want to license something that could lead to a lot of disappointment. That said, if somebody comes up with a simple eInk device with a full sized keyboard, spell checking and TTS, I am there- not because it’s distraction free, but because I find eInk easy to read and I find dedicated devices tend to have longer lifespans. I still an ancient word processor from the days of reflective LCDs were not uncommon.

Pixel Queue Eye?
At least check the name of what you are presenting…

I’m doing my zoom teaching using an X201t. The X230 is several generations newer, and a perfectly respectable modern machine. (It remains popular in the Thinkpad community because it is one of the last in the X2xx series with a full-travel keyboard.)

My memory of transflective displays of yore (like the Game Boy Color and that one Palm I had) is that they had a pretty distracting rainbow moire sort of thing going on when viewed in sunlight. OTOH I don’t remember them looking grayscale, so maybe this is a technically different thing?

Clicked the comments to see if anyone would mention the bezel. Congrats!

The regular X230 display has a big bezel, but not that large. Obviously the Pixel Qi screen he’s using is smaller than the native display and he built a bezel to fit it. He did a good job though, considering.

Freewrite is a single purpose first draft creative writing machine. I got one thinking it’d be a good idea to be disconnected from the internet and limited to just writing. I offer this compl…

I loooooooooove eInk! I am kinda wanting to get a large eInk monitor, there’s all kinds of crazy stuff available on alibaba and other Chinese sales outlets. Just today I got a review soliciting email about this

I normally decline all that kind of stuff, but I accepted in this case… with color entering the scene, and refresh times getting to “tolerable like really old LCDs used to be”, it’ll be fascinating to see where this all goes. Check it out! FAST MODE PLUS PLUS

The uh… bad news… is that it’s over a thousand bucks. 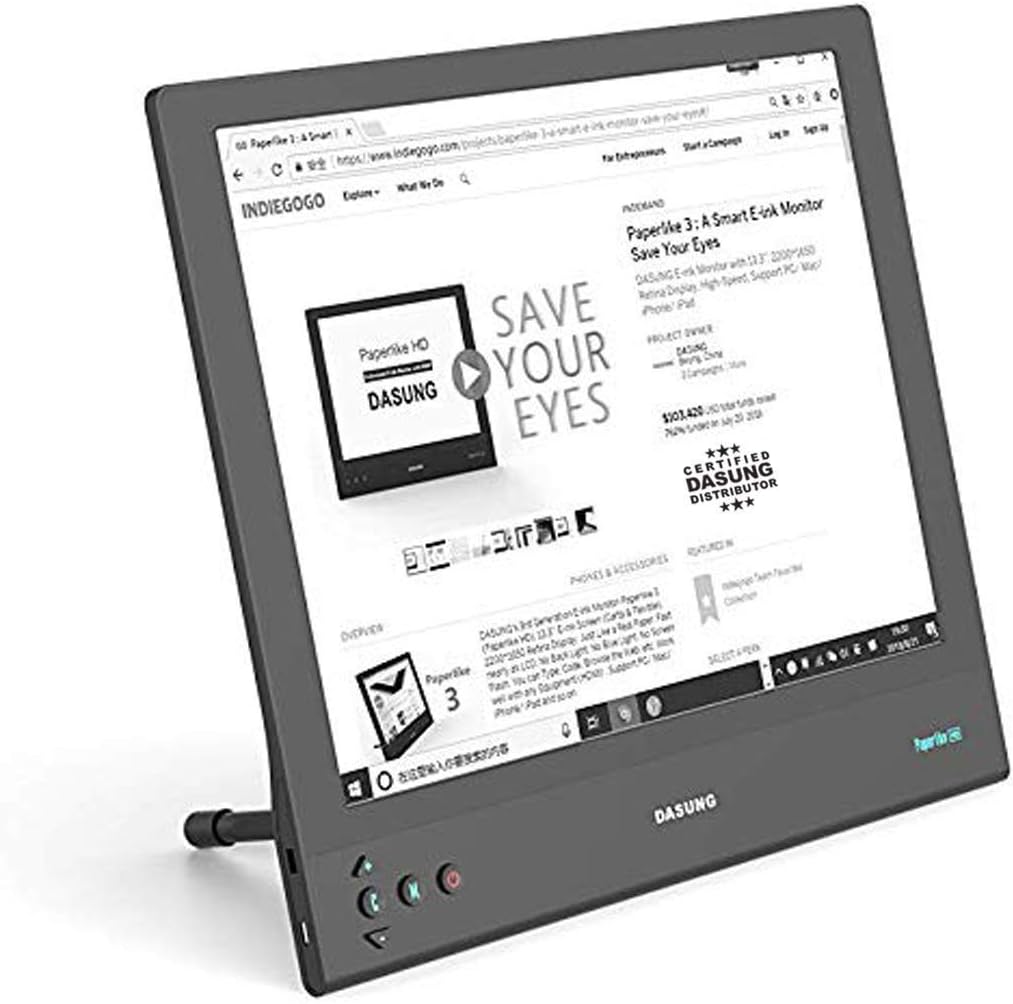 The Paper Like 3 HD Front-light and touch by Dasung is an auxiliary computer monitor that protects your eyes - the first of its kind with E-Ink technology. It displays information like a piece of paper instead of emitting...

Also, I was kinda unclear how this Pixel Qi stuff worked, it’s more like a hybrid in-between, perhaps a preview of color eInk?

Indoors with the brightness turned up, Pixel Qi screens look just as good as regular LCD screens, but aren’t as bright and colorful as higher quality LCD screens like the Nook Color’s LG display.

One thing these pictures don’t illustrate is the benefit of Pixel Qi screens indoors next to a window or other bright light source. Yesterday I spent a couple of hours with the Notion Ink Adam sitting in front of a window with the light partially on the screen. The auto-brightness keeps the backlight on just enough to really make the display look good. It has kind of a metallic look to it, colors aren’t very bright, but everything is very clear and defined.

Haven’t been able to turn up much on the optical methods of the trans-reflective display tech, (which incidentally does seem distinct from the e-ink - free-rotating-spheres-suspended-in-bubbles approach). The look of it is similar to this 19th century imaging process that used thin-films and self interfering light waves to produce full color imagery.

Gabriel Lippmann won the 1908 Nobel Prize in Physics for his method of reproducing colors in photography. Despite the significance of this result, there are still misconceptions regarding the approach. We provide a complete end-to-end analysis of the...

I love avoiding waste/re-purposing old hardware and he has done a cracking job here. I guess that it frustrates me how relatively slow-moving the technology in the e-Ink displays are. I’ve been looking for a ‘proper’ (A4) sized display for document reading, to try to avoid paper waste and there only seems to be Sony in that marketplace and the lack of competition is keeping the prices high.

(With excuses to @Papasan)

Let me contrast
Like a Pixel in the sun
Let me contra-a-ast
Old Thinkpad, I know you’re the one.