This idea has been around since the beginning of WiFi, but this is the first time I’ve seen serious work on the concept. In the ultimate case, we would not need cables or any centralized system, just hop house to house…

No master routers to tap, no cable to pay for… no controls. Also not very efficient AND there must be a standardized system/protocol (which someone controls). This seems to be a workable anarchy - where do the operating costs go now?

Cable companies wire makers, governments must fight this… could be an interesting show.

We are still realizing what can be done with our toys - hang on!

I’m not buying the whole service provider concept. If I open my home wifi and a neighbor downloads some cp I’m the one they are going to come after. At which point I don’t think TWC is going to think highly if I go, but oh I’m a service provider…considering that is against the rules and regulation of their service. I might could skate around infringement charges, but I’m pretty sure my service provider would have something to say about it.

And why is it I keep hearing this part about wifi being easily breakable? I think everyone around my area is on WPA at least and one person has no encryption and runs mac filtering it seems. You can’t just crack WPA like you can WEP. Even with a key you still have to run through a cracking/hash program at a much slower rate than WEP. Outside of renting server time I doubt you’ll crack a WPA protected network in any reasonable amount of time (yes dictionary attacks can work, but it’s not that hard to make reasonably decent passwords.)

if i can share my connection with a guest in my house, or a guest who is in my yard, why can’t i share with somebody who is just outside of my yard?

This resembles the idea used by the now-disgraced Spanish Fon wifi outfit. I was Fon’s most widely read English language fan blogger at http://elfonblog.fondoo.net Share wifi at home, receive wifi from your community elsewhere, even abroad. Except that no money is demanded and there’s no hungry octopus in the center that swipes the majority of the wealth, and maintains obstacles instead of adding real value to the system .

I would add at least one feature to this project. The wifi can be unencrypted. The routers should have onboard VPN servers so people using the hotspots can encrypt their wifi to protect from nearby eavesdropping. Another option would be to forward the client’s VPN tunnel to another OWM router somewhere else. This obscures the user’s location. There would be automatic choice of endpoint depending on load. Idle routers with no local clients would not go to waste. A vip option could be to choose where your VPN tunnel makes you appear. If you’re a contributor to the project, you would be a vip who could also choose his own router as endpoint so he can access LAN and file shares. OWM would provide a custom VPN client that ensures that the user is not using a fake hotspot, and facilitate making the choice of where the VPN endpoint is. It would be fairly simple to build a darknet available to those using the VPN clients.

Or, the wifi could be WPA encrypted… Whisher.com (now defunct and bought by wifi.com for no purpose) was working on a replacement/enhancement to the wifi manager on your windows, mac and linux pcs. It worked just like the regular one, but it also held an encrypted database of wifi router mac addresses and WPA keys for them. It indicated when you were in range of one, and would connect you to the router with full WPA encryption - without revealing the key to you (optimally). The owner of the hotspot could open his router to all, all but those on his blacklist, or only his friends on his whitelist. Privileges could be added or revoked on the fly. You could use any router with Whisher, as the router didn’t require custom firmware, your pc used a custom wifi mgr. So, the Whisher app acted like DRM. It also supported a darknet sort of community and chat app, but I would say it was superfluous. The custom OWM client I describe above would do what Whisher did, though Whisher did not have any anonymization features. The OWM routers could still tunnel encrypted traffic to other endpoints.

WPA is more secure in one sense, but the key database could someday be cracked. Perfect Forward Secrecy type VPN encryption (if it exists) would be more work to crack, but also a higher load on the routers. Perhaps if a trustworthy VPN company was partnered with OWM so the endpoints could be independent of the embedded router systems. Faster speeds and more choices would be available with a paid subscription (but you could use any VPN provider).

Like Acer mentioned there is the terms of service issue from your provider, which would only really ever come into play if they found out you were “giving” away a service which they could charge for.

But a key point to what you are saying is the people in your yard are presumably people you know. If you are giving them access to your internet connection it at least implies a little bit of trust. While there aren’t exact analogies for something like the internet imagine your uncle Bob borrows your car and uses it in a robbery. It’s likely the first place the police are going to come is your house. Lets even assume Bob returned the car exactly as it was…now you are stuck proving that you didn’t use that car to commit that crime. Except with the internet you are dealing with something a whole lot less solid than a car, perhaps it was uncle Bob’s cell phone torrenting something illegal. But all that comes down to is a numbers game. How many people torrent movies? How many get issued a warning of any sort? It goes on and on, so while it’s not likely that uncle Bob is going to use your car for crime, it is technically possible (and really in this case uncle Bob is using somebody’s car who just left the keys in it and a note that says use me.)

I see using a router with no password the same as using my sprinkler to cover my neighbor’s lawn. I’m paying for the use, not paying them to tell me how to use it. Given the number of times in the world that someone’s open internet has helped me out I have no quarrels providing it if anyone needs it in my sleepy little town.

Wasn’t there a plan for BT to let people share part of their bandwidth using Fon?

Why is Fon disgraced? What happened?

what gets me is that the entire security conversation seems to focus entirely on the person who owns the router and ignores the person on the street who we are apparently encouraging to engage in the networking equivalent of getting into a stranger’s car. 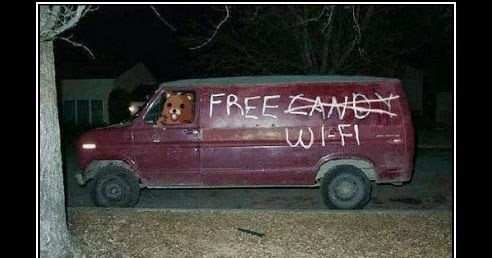 from here (source image ) I'm not sure why the EFF thinks open WiFi is a great idea . It kinda seems like they're only considering the...