I imagine it’s nice to go out on a win (or at least a loss that outperformed expectations enough for many to count it as a win).

Now if Dianne Feinstein will just take a hint and retire while she can still do so with dignity that would be a great way to start the next congress.

She should be remembered as a long suffering and very wise servant for the good of the American public. hell, it could’ve have been nicknamed “Pelosicare” as much as “Obamacare”.

I hope that the House Dems are smart enough to line up a tough young progressive to continue her work. I’d love to see Katie Porter as Speaker.

It’s gonna go to someone else in leadership who has had a long tenure in the house, though.

Going to miss this quality leadership from someone this in touch with their base (and, by extension, reality):

“The green dream or whatever they call it, nobody knows what it is, but they’re for it right?”

A lot of conservatives will treat her announcement as some kind of win for their side, but that needs to be seen through the lens of their hatred-- she was on the other side and got stuff done.

Eventually the DEMs will take back the House and someone else will be speaker of the House, and they will rage against that person too.

Meanwhile the GOP’s new speaker will have to corral a party at war with itself.

Heard Hakeem Jeffries is the first name out.

That’s a sad situation. As someone who’s seen too many people with dementia hanging on to disastrous effect, I’d say no-one is doing her a favour telling her to keep going. 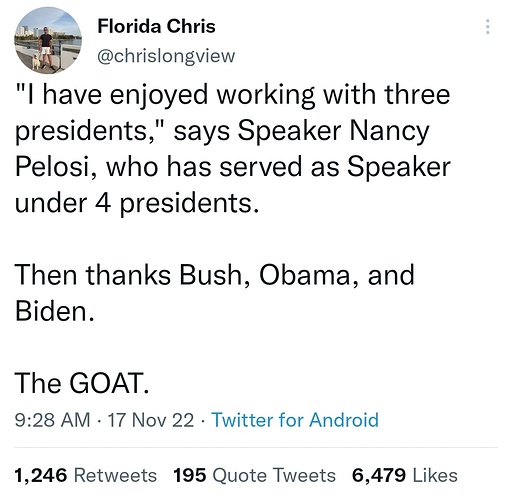 Has he been in congress long enough, though. Seniority does play a role, whether we like it or not… I agree with @gracchus about Katie Porter, but again, not much seniority there. The minority leader job tends to be about relationships and getting people onboard with the agenda (or fighting the majority’s agenda), so you need someone who has been there a while and formed relationships with many people over the years.

Which, to be honest, is not a bad criteria to go by. Sure, being tough is worth something, but actually knowing how things work is what we end up really admiring. Sure, some speakers are outsized personalities, like Tipp O’Neill of my youth, but he knew the job and played the role well. It’s why Newt Gingrich was such a failure despite being such a media darling at the start. And why Republicans always fuck it up, such as when they chased out Boehner.

What we need for the next two years is an equally savvy cat herder. Someone who will make Kevin gnash his teeth in frustration.

Which, to be honest, is not a bad criteria to go by.

Is it though? It’s true not everyone in the leadership is competent or would be good for leadership, but that doesn’t mean that being around for a while doesn’t confer advantages to understanding the institution and how it works. I doubt the Democrats just go by only seniority, but I’m sure it plays a role in making these choices. I don’t see how it can’t.

She’s what, 82? Good work, enjoy your retirement. Take McConnell and some of the other octegenarians with you.

Nothing wrong with age, I have some myself. There is something wrong when everyone with any meaningful power is over 75 and politicking like it’s 1989.

Perhaps with the current congress, they could promote a bill that would require congress to replace the speaker with the minority leader in the event of governmental/budget shutdown, until the next election.

It isn’t the only criteria, dear gods no! But it’s not a reason to glibly discount anyone either!

Democrats are not immune to the whole “let’s give it to Bob, he’s earned it after all these years” talk, but the modern party has learned its lesson there in 2016 and their caucuses in congress are remarkably disciplined. We may all moan and groan about Chuck not keeping Joe and Kirsten in line, but having only two loose cannons is actually quite a feat.

I shalll remain cautiously optimistic. Maybe it’s the upbeat message from Woke, which I just discovered on Sony AXN over here. But I think we can actually do good, despite our worries and the shit the authoritarians are brewing up.

You’re probably right. I’m sure I know nothing.

Oh damn that woman can throw more shade than the Capitol Dome.