And what happens if you do screw up? When the magician is wrong, there’s
no way the confederate can say “That’s right” to cue him for the next item.

It seems like to me you could also have a range of negatives (“no”, “incorrect”, “wrong”, “that’s wrong” etc.) as cues for the next item.

Thought the same… The individual phrases could simply mirror the positive answers in their indication of the next item, so there’s not even extra memorization necessary.

Cool, but that is a photograph of grumpy aesthete Sadakichi Hartmann.

Even getting it wrong will impress a crowd if you can keep your composure and correct yourself convincingly (as any cold reader will tell you). It’s obviously just a problem with the last stage, so you could say “nearly”, “not quite” or something like that to give another clue.

As a child, my parents had friends who were professional magicians. Their “mind-reading” code was based on the alphabet. I once took a pigeon feather to one of their shows and nearly stumped them. It took them a while but they got it.

Yup - first thing I thought of was “The Great Brain at the Academy”. That was published in 1972, but were semi-autobiographical of the authour’s childhood at the turn of the century. I’m guessing this con was added based on the revealed secrets, but who knows - maybe it was an older trick than that? Regardless - they’re great books for kids with a very intelligent protagonist, provided you’re okay with a child con-man. I still like the old covers myself, this is Book #4
cover image

You could also set it up so you don’t have to start with money. The first word or phrase is the key to starting the table, as in: “Right, I’ve picked something up.” “Okay, what do I have in my hand?” “What am I holding?” “Are you ready?”

came to say this. remember that one, @codinghorror?

Did anyone say it wasn’t simply a problem of the last state?

Actually, I think if one would really want to stick to the proposed algorithmic solution then your proposal is not working: There are no “clues” since there is no guessing involved. There is a fixed set of outcomes of the tree. Whatever is not in the tree can’t be answered.

I will certainly admit that probably no one would do it that strict. However, when you guessed wrong once your next answer must be right. So it’s probably better to go the reset route instead of trying to guess a thing not in your tree from clues. 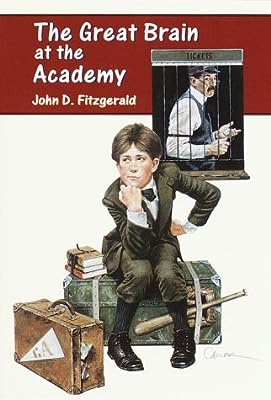 Everyone knew that Tom Fitzgerald, alias The  Great Brain, would get into trouble when he went off  to school at the strict Catholic Academy for Boys  in Salt Lake City. But no one--including Tom--kne ...

“The Mental Marvel’s brain makes your great brain
look about the size of a pea,” Rory Flynn said to Tom.
“Just imagine being able to read other people’s minds.”

“If the Mental Marvel could really read minds,” Tom
said, “he wouldn’t be traveling around the country in a
vaudeville show. He could be making a fortune.”

“Many ways,” Tom said. “He could become a gam-
bler and know what cards the other players are holding.”

“Not if he is an honest man,” Rory said. “You are just
jealous because you can’t read minds like the Mental
Marvel.”

“Jerry and I could do the same thing with a little
practice.” Tom said.

Tom was pretty confident he knew how it was done.
But he wanted to make sure before he put up any hard
cash. And he knew if he acted reluctant that would make
Rory and the other kids all the more eager to bet. His
great brain and money-loving heart were working like
sixty to turn this to his financial advantage.

“Just have your money ready after supper on Monday
night,” Tom said.

Tom walked over to his bunk and sat down with his
three friends.

“Boy, oh, boy,” Jerry said. “You sure stuck your neck
out that time. You know you can’t read my mind, even
with your great brain.”

“Nobody can read another person’s mind,” Tom
said. “But my great brain did figure out how the Mental
Marvel and his assistant put on their mind-reading act. I
just need to work out the details. Phil will be visiting his
folks tomorrow so you and Tony meet me in our usual spot
in the yard. I’ll have it all figured out by then.”

When Tom met Jerry and Tony under their usual
tree the next afternoon he had a notebook with him.

“First,” he said. “let me explain how the Mental Mar-
vel knew what the assistant held in his hand. I noticed that
each time, the assistant asked a slightly different question.
They used a code word for each article. For example, when
the assistant said, ‘Please read my mind, Mental Marvel,
and tell me what I hold in my hand,’ the code word ‘please’
meant it was a watch. My great brain has figured out dif-
ferent words I can begin a sentence with. All you’ve got to
do. Jerry, is to memorize those words and the articles they
are code words for. I made up two lists, one for each of us.”

He tore a sheet from the notebook and handed it to
Jerry. On it he had printed the following:

Jerry looked at the list. “What if it is something we
don’t have a code word for?” he asked.

“We’ve got a code word for just about everything the
fellows would have on them at the theater,” Tom said.
“But if one of them does hold out something we don’t
have a code word for I’ll do the same thing the assistant
did and just pass them by. Start memorizing the code
words now. And after supper go to the chapel where it is
nice and quiet and do some more memorizing instead of
praying. We will meet here tomorrow after school for a
rehearsal.”

Can’t wait until my son (and daughters) are old enough, looking forward to reading them all of these books! Related: http://findingfitzgerald.com/

I sure hope Jerry didn’t get the first item, look at it, and say “Oh, I can tell what this search will read, can you?”

Very similar to a trick I did as a kid, which used the same “jump ahead” method, but requires no memorization. You just need one confederate in the audience. Ask a number of people to write down the name of an object on a slip of paper, one per person. They are asked to fold the paper in half, then in half again, and place the paper in a hat. The confederate has written down a previously agreed upon object, and secretly marked the outside of the folded paper.

The mind-reader picks out any paper except the marked one, goes through some theatrics, then calls out the agreed-upon object name. The confederate calls out “That’s mine!” The mind-reader opens the paper to confirm it’s correct, casually refolds it and tosses it on the floor. The mind-reader now knows a real item’s name, and uses it when he picks up the next piece of paper. Continue until all the papers have been guessed, picking the confederate’s paper last. If anyone checks the papers later, they will all match up to the mind-reader’s guesses.

There’s a simpler variation I learned as a kid.

Start with a limited pool of items, say five or six, and arrange them in a line on a table or tray. If you really want to make it seem hard, have the marks choose the items themselves on the spot.

The patter for this bit went something like “I’m going to form a psychic bond with the items, so that they can speak to me and tell me when they have been chosen.”, in an effort to explain why I couldn’t guess just any old item at will.

Once the psychic is turned around/blindfolded/out of the room, the helper then fills in the psychic with a simple alphabetic code where the first letter of the comment or question is the position from left to right; Say the third item is chosen, the helper would hold it up and ask “Can you see what I’m holding?” or “Crap, I don’t know how you keep getting these right.”

After a while, someone will inevitably try to cheat. For items not on the tray, or no item chosen, we’d use the name of the person trying to cheat. “Sarah has made her choice! What item am I holding?”, to which the response ran “Of course not. None of the items are speaking to me, so Sarah didn’t choose any of them.”

For multiple items we used the psychics name as a tell. If the first and third items were chosen, the patter would run something like “Frank? Are you ready?” / “Yes” / “Can you tell me what I’m holding?” / “I see the [third item], but there’s more than one speaking to me. There are two of them, [third item] and [first item]!”

Completely different, but I remember some magician (maybe Penn & Teller) demonstrating a “audience member picks a card and has it in an impossible location that proves it was predicted in advance” trick… they pick a card, the card’s destroyed, the magician asks what card it was (or figures it out from some other method), and then… ta-da, reveals that it’s actually painted on the floor under the carpet they’re standing on.

The trick was, that EVERY card in the deck was hidden in some impossible location, and all the locations were memorized in advance. Once he knew what card it was, all he had to do was reveal THAT card in it’s impossible location… only the 2 of diamonds was under the carpet, for example, if it was the jack of clubs, it would be in his wallet, if it was the ten of spades, it would be temporary-tattooed on the magician’s arm, etc. (I think there was also a classification system so all the 2’s are in the same general hiding place, same for 3’s, etc, and the suit just determines which of such options to go with, so it was easier to remember).