I cannot believe how geeked out I am for that to happen. I’ve always paid attention to space stuff, but for some reason the drone thing has got me really excited. It just seems like next-level amazing.

Because it costs a lot of money to ensure somethings works on an entire different planet?

Well…. The blades have to spin 5x faster than a helicopter on Earth and only weigh 5 pounds…

I cannot believe how geeked out I am for that to happen.

I know, my Dear Wife and I are very excited, the images will be awesomeness. Go Science!

The Martian permits alone were astronomical!

Perseverance and Ingenuity are hereby dubbed the RightStuff Brothers.

Remember the days of the Viking probes? Good times.

Remember the days of the Viking probes?

Do I ever, hid in the basement every time they came to town.

Seriously, I’d be interested to hear audio of the drone, too.

Wonderful events like this have helped keep me from complete despair over the prospects for humanity over the past years. Keep 'em coming, NASA!

I don’t get it. They spent a gazillion dollars to touch down safely on the surface, and now they can’t wait to get up off the surface? Crazy earthlings.

Perseverance is about to give birth to a 4 pound drone from its metal belly.

If only they had the foresight to add a couple of googly eyes then maybe it would have a shot at competing with the reigning king of rovers: Sojourner. 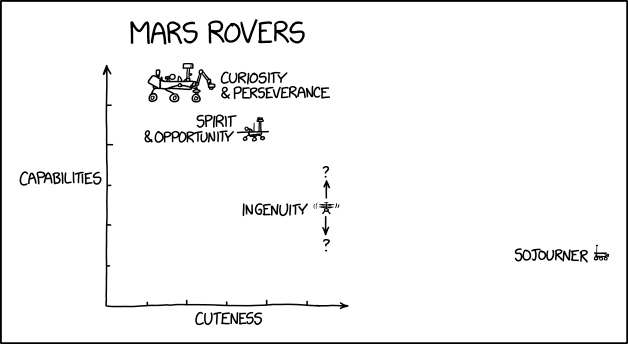 They spent a gazillion dollars to touch down safely on the surface, and now they can’t wait to get up off the surface?

It’s like Jerry Seinfeld’s old bit about bringing a car to the moon. “You’re on the moon already! Isn’t that far enough?”

I imagine that includes research, development and testing (oh, so much testing!) for a unique helicopter design flying under completely novel conditions (e.g. 1% of Earth’s atmosphere, equivalent to flying at 100,000 feet, which no existing helicopter is capable of). Plus, it’s made out of highly specialized parts (that don’t get the price decrease of being mass-produced), with few off-the-shelf bits - that really increases the costs of things. Especially if you’re using, as NASA does, very high quality elements, like the super-high-efficiency solar panels where a few percent more power comes at the cost of much higher prices.

All that, and the fact they’ve been working on it for more than 6 years (they published a design for it in 2014), and It adds up. Labor costs alone eat up a lot of that - the operating costs for this are another $5 million, and the specifications are only for five flights (though no doubt it’ll manage many more than that, if it works according to plan).

The Beeple NFT involved only one jpg (even if it was made out of multiple images), though technically it’s a link to the jpg, not even the jpg itself. So it’s only like one-and-a-quarter Beeples. If you want to talk about individual images, those NFTs have still sold for millions, so it’s like a dozen Beeple jpgs at most.

Gods, does that put things in a depressing context.

It’s like Jerry Seinfeld’s old bit about bringing a car to the moon. “You’re on the moon already! Isn’t that far enough?” 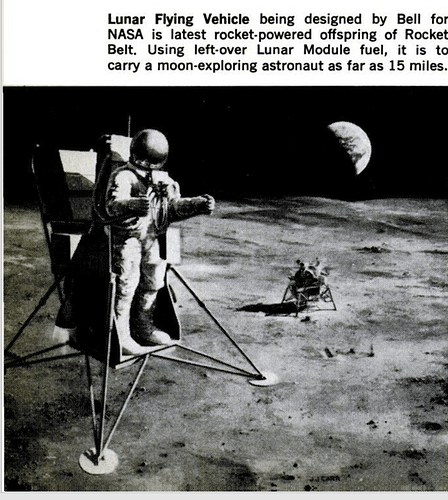 Between the Martian atmosphere and gravity, it’d be hard to really test the flight software. Soon it’ll be brown-trousers time for the code.