correction: hostile to every human who has to live in a society where such design exists

I’ve seen passers-by look at this bench and think the city did it to mess with the homeless, but it’s actually a piece of guerilla art. 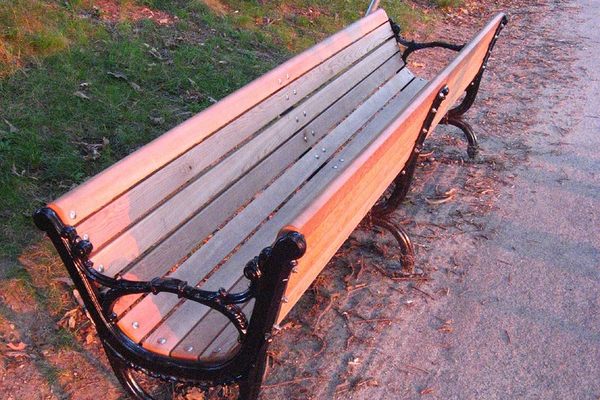 From bench to vandalism to art, this silly prank seat was funny enough to become permanent.

(And I’m not trying to dismiss or explain away the legitimate examples of hateful design, BTW. This example just came to mind. Ironically this could actually make for a pretty good place to sleep.)

Kudos to the priest who removed the rocks.

I’m an atheist myself, but I do appreciate those believers who act to help the less fortunate. Of course, they may also act in ways I don’t support.

And what does your dad do for a living Johnny? Oh, he builds things to make poor people even more miserable and uncomfortable.

Not just hostile to the so-called ‘undesirables,’ but also to people that they hope to attract to those same spaces, so that they can spend money… personally, I endeavor not to shop or eat in areas that employ hostile design in the surrounding public spaces.

Is it better that one person takes the whole bench rather than four people sit on it?

‘It is better’ not to use antisocial tactics like hostile design to try to control how people act in public spaces.

If businesses don’t want unhoused people hanging about, then they should do something to make sure that affordable housing is not unattainable for anyone… but that’s too much like the right solution.

And? Is helping people with nothing have somewhere safe to rest a step too far for you?

In the minds of such business owners, their “what do I pay taxes for” attitude strictly speaks to city funding for the forceful ejection of the homeless and to hostile design — and not to shelters and affordable public housing (things that are anathema to developers who purchase face time with city government officials.)

is it better than one dude spreads out over two seats than another person sits next to him?

Is it better that one person stretches out the width of a pedestrian footbridge than other people pass freely without having to step over someone?

Is it better that people are stepping over people stretched out on a pedestrian foot bridge but never thinking to check if they’re okay???

Honestly, if someone needs a rest and no one else is using that spot, it’s cruel to prohibit the tired person from using it with the kinds of designs shown here.
If more people need the spot, fucking be a grown-up and use your voice.

With many inner-city shelters bereft of space and little to no affordable housing being constructed, where would the homeless go?

During the pandemic, Caltrain (Bay Area commuter train) removed all of the benches (20 or so) in and around their main station in San Francisco and closed their waiting room. All to prevent the homeless from sitting/lying there. If you miss a train, it may be anywhere from 30 minutes to over an hour before the next one, which meant you were forced to stand, sit on concrete, or relocate to a Starbucks a few blocks away for a seat. A large number of people (including myself) complained that this was clearly an ADA violation and that the benches needed to be replaced. Their solution was to restore exactly two benches and paint them blue as alleged accommodations for the disabled. Of course, the two benches are now always occupied by the homeless. In the past there were enough benches for everyone to share, not any more.

This one confused me. 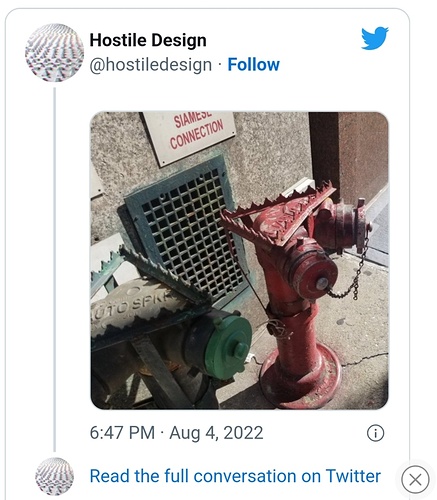 I see a knuckle destroyer on a piece of safety equipment.

Do they really want the fire dept to have to remove those caps extra slowly to avoid the risk of injury to themselves or damage to equipment?

I read about this. Probably here.

In the past there were enough benches for everyone to share, not any more.

That tracks. Just like closing the public pools when integration came roaring through.
“I don’t want those people to have it, so that means no one can have it.”
Horrible public policy position.

If you miss a train, it may be anywhere from 30 minutes to over an hour before the next one, which meant you were forced to stand, sit on concrete, or relocate to a Starbucks a few blocks away for a seat. A large number of people (including myself) complained that this was clearly an ADA violation

Reminds me how the bathrooms at BART stations have been closed for decades due to “security concerns.” Apparently they’re finally starting the process of reopening them but it’s going to take years to get to all of them. 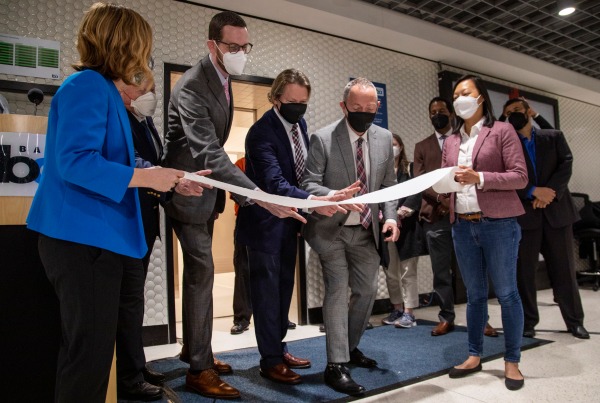 I’ll go you one better; many above ground BART stations out in “the 'burbs” (think Union City, Pleasanton, Concord, etc) have had their restrooms back open for years now.

Of course, they may also act in ways I don’t support.

To be fair, that’s true of every other human being on the planet, regardless of belief in a religion.