Photos of bugs and stuff with my USB microscope

Nice one. I have one of these, and found that I can insert stuff up the tube to almost touch the lens for extreme magnification. Place a mirror underneath to reflect the light back if it’s too dark inside.

Things I’m not going to show you: nostril, ear hole.

You could have let it go without saying anything, but noooo, you have to taunt us with what we could have been enjoying right now.

How does this compare to the old Intel QX-3, the USB microscope that used to be popular about a decade ago?

Not fair! Must have this now…

It’s a cute toy, but not a whole lot of magnification. Did you manage to photograph anything microscopic?

Not really. Here’s a full size image of the peanut to give you an idea of what the photos look like.

If you have an old USB web cam lying around, you can turn it into a low power microscope by reversing the lens. maybe.

Way cool. I’ve been watching the development of things like this over time. There used to be one that replaces the exit pupil of a regular microscope, but I haven’t seen anything new on that lately.

On the low-tech side, I’m lucky enough to have been selected as part of a huge Stanford University field test of the [Foldscope] (http://www.foldscope.com). I’ll be contributing pictures to their site in the weeks to come.

On the low-tech side, I’m lucky enough to have been selected as part of a huge Stanford University field test of the Foldscope. I’ll be contributing pictures to their site in the weeks to come.

Something accidentally your URL. And www.foldscope.com looks like a really neat idea. I look forward to seeing your pics from it.

Why is it every time I follow one of your product links Amazon resets the connection?

It works fine with Linux. I use Cheese to access it.

The Internet of Things has gone TOO FAR.

I love these easy to use scopes. My daughter and I got one with the Celestron branding, but is it basically the exact same item shown in your pic, all the way down to the hard to manage mechanical arm. The arm turns out to be more of a hindrance. I once used it to look in my ear canal so I could retrieve a pesky fly that had gone exploring there. We’ve looked at many things over the past year like mold, teeth, mites on a recently deceased bird feather and aphids scurrying all over a favorite flower) and there many more to find.

I’d been looking everywhere for a simple tool like this since CSI showed their first ProScope in the early 2000’s. I was surprised to find so little in the way of competitors to ProScope for a long time. There now seems to be a bit of a slowdown to innovation in this area for consumers, though ProScope still adds better quality and features from time to time. One cool, but expensive, recent feature is a cordless handheld scope that streams the images or video it is taking across secure wi-fi for viewing on up to 254 mobile iOS devices.

My wife is a Media Specialist at a high school and they’ve had a ProScope for many years. Its refinements make the extra investment of scratch worthwhile. The lens covers and indirect lighting definitely add to the quality of images you capture. So, I’m sure sure there is plenty of room for improvement to the general consumer device.

I use the $15 Macro Cell Lens Band and my iPhone for pix like this: http://imgur.com/1wJepdb
(I don’t have any relationship with the folks who make the Macro Lens Band – except that I gave them $15.)

I take your microscope and slam it with my microscope.

Intended for aiding microelectronics reverse engineering and for home science.

(Currently out of order, though, as I had to return this one (and bought another that needs one of the objectives replaced) and the camera that mated well is replaced with a camera that does not mate so well.)

(Obligatory gripe: Digital cameras often have a video-output. Usually composite video, intended for playback of the shots. What no manufacturer says and as far as I know no website tracks is the video output behavior in other modes of operation. Some cameras have it active only during the playback. Some have it operating always, mirroring what’s on the display; of those, some have full PAL/NTSC resolution, others are somewhat blocky because the resolution is limited to the LCD display’s one. This is OF COURSE! never specified anywhere, so when a camera fails and has to be replaced, there’s little chance to find a suitable replacement that depends on this feature.)

I think you may be using it wrong. There are 2 magnifications on my similar microscope, and you’re only getting the x20 or so effect. This is what I have: 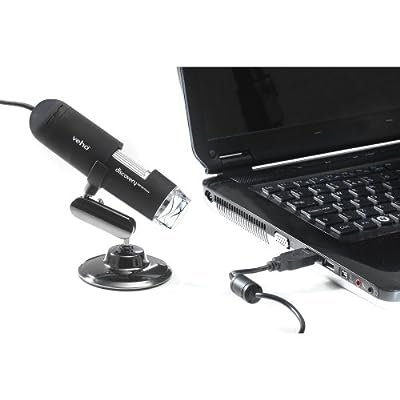 You must twist the large controller all the way to the end, and then slowly reverse until you find the focus. One end is x40 on mine and the other x400. The entire field of view at x400 is around 2mm, but the depth of field is extremely short.

This is the photo my son and I created using several pictures of the same fly, stitched together using huggin to correct for the short depth of field. It is called “Boiler Fly” (because it was a fly that we found on the boiler, duh).

Enjoy, these things are amazing fun. You can even see the nucleus of an onion cell if you get the light right.

I also like the ones you get as a case for mobile phones - taking advantage of the crazy MP levels of modern smartphones.

Watching sweat appear from pores on my fingers/hands was pretty revelatory!

@frauenfelder would have to comment on the maximum magnification capabilities of this device to say for sure; but I suspect that it’s a mixed bag:

The QX-3 had fairly low quality plastic optics; but was configured much like a proper microscope(minus some build quality), rather than a ‘Much Macro, Wow!’ webcam, which is the typical standard for ‘USB microscope’(yes, you can get USB-connected heads that slot into intimidatingly expensive microscopes; but those are typically not described that way). 200x was, if my memory of mine serves, rather pushing the quality of the system, it was honestly 200x, but lens quality starts to matter at higher magnification; but 60x worked fairly well.

On the other hand, the QX-3 had a fairly miserable 320x240 sensor, quite noisy, poor dynamic range, muddy as hell without strong lighting. Thanks to progress by Team Silicon(and the demands of cell phones) it’s hard to even buy sensors that lousy anymore. Based on the image of the peanut, the newer unit is putting out 1600x1200 images with some banding and noise in the darker areas; but fairly good performance overall.

Probably depends on your purposes: the QX-3 was a lousy microscope; but it was more or less true to what you’d expect from a severely cost-reduced optical microscope. Today’s ‘USB Microscope’ tends more to be a very-macro webcam; but the sensor is just so much better that the comparison is hardly fair. If you do need actual microscopy, the QX-3 might still take it; but for more generic close-up work modern silicon is absurdly better.