Pigs can breathe through their butt, and maybe you can too!

I’m wondering who the first person was to ask “Can pigs breathe through their butts?”

Because that is not an obvious question to me.

It has previously been demonstrated in mice.

The line of thinking is: “sometimes when a sever trauma victim comes into the hospital, their mouth/throat/chest are damaged so much that they can’t breathe, or they won’t be able to breathe properly during surgery to repair the damage. How can we keep them from dying before we finish surgery?”

One way is to externally oxygenate their blood with a heart/lung machine. But another is to look for other tissue in the body which could be oxygen permeable and provide contact with blood. Intestines already allow absorption of other nutrients, so it seems like a reasonable choice to research.

Also, apparently some fish do this normally.

“Has this every happened to you?”

(Guy snorkeling goes too deep and gets water in it, splashes up, gasping for breath.)

“There has to be a better way! Now there is, with the Borkle®! Our patented Rectal Breathing System will have you snorkeling with comfort and ease as you explore the wonders of the sea!”

eat through our butts

I’m reminded of the Philip K. Dick story ‘Counter-Clock World’, set in a world where time has reversed and begun to move backwards. Patrols roam around cemeteries, listening for heartbeats so they can exhume the once-again living. 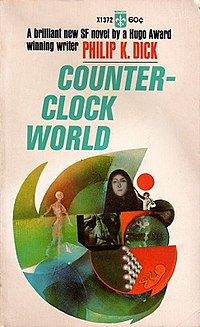 Counter-Clock World is a 1967 science fiction novel by American author Philip K. Dick. It was expanded from his short story "Your Appointment Will Be Yesterday", first published in the August 1966 edition of Amazing Stories. The novel describes a future in which time has started to move in reverse, resulting in the dead reviving in their own graves ("old-birth"), living their lives in reverse, and eventually returning to the womb where they split into an egg and a sperm during copulation between...

“People do not eat, but instead consume “Sogum” anally through a pipe, and later “plop” out food orally, which is done in private, due to its ‘shameful’ nature. As for smoking, cigarettes are no longer smoked, but the smoke instead blown back into them, making them grow back to normal size (this also clears and freshens the air). “Goodbye” and “hello” have reversed their order within standard greetings, and “food” is used as a drop-in replacement for the expletive “shit”.”

I wonder if this will help people suffering from compromised lungs; like COVID sufferers?

I’m reminded of the Philip K. Dick story ‘Counter-Clock World’, set in a world where time has reversed and begun to move backwards. Patrols roam around cemeteries, listening for heartbeats so they can exhume the once-again living.

Red Dwarf did an episode like that too. After a long evening of spitting beer out into pint glasses you have an “interesting” trip to the loo.

The thing is, can pigs sing through their butts? I look forward to hearing a massed porcine choir attempting Cosi Fan Tutte or say, John Denver’s back catalog.

Now, if they can sing and eat at the same time, that would be a real party trick.

“It’s so impressive because we never thought of breathing from the gut, but it’s possible…”

If you never thought that - why were you sticking oxigen up pigs’ butts?

Things I learned in school…

*Lungs have the surface area of a football field.

There seems to be a discrepancy in relative size there if you’re serious about a career in butt-breathing.

Note - Not everything I learned in school turned out to be true or even useful so there’s that.

*That may have been capacitors. I often get lungs and capacitors mixed up.

“There has to be a better way! Now there is, with the Borkle®! Our patented Rectal Breathing System will have you snorkeling with comfort and ease as you explore the wonders of the sea!”

Hey, does your snorkel taste funny, too?

No, capacitors are the powerhouse of the cell, I think.