Who could have seen that coming.

a pervasive culture of corruption that spreads all the way down – only
the continuous injection of new money from the country’s oil-fields kept
the whole thing from collapsing.

Isn’t that pretty much Saudi Arabia, too? Or is it not quite as bad there?

It’s been more than ten years since G.W. Bush’s “shock and awe” campaign demolished the country. Some people are quick to blame Obama for pulling the troops out, except Iraq’s parliament voted for the US to withdraw troops in 2007, and in 2008 Bush signed the agreement to remove the troops by 2009.

The United States destroyed a country based on a lie and a conservative geopolitical fantasy. I think the only way it can be fixed now is for some gigantic multinational UN force that outnumbers Iraqis by 2-1 to restore order and rebuild infrastructure. Either that or install another iron-fisted dictator-- given time Iraq will do that on its own.

Here is an Atlantic article that argues pretty much that, FWIW: 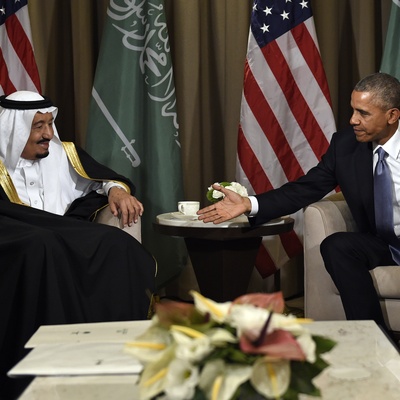 Start Preparing for the Collapse of the Saudi Kingdom

Saudi Arabia is no state at all. It's an unstable business so corrupt to resemble a criminal organization and the U.S. should get ready for the day after.

I’d suspect it’s not as bad as Iraq, but I’m not sure their dirty little war in Yemen is doing much good within the Kingdom right now.

Probably being entirely overrun by Daesh.

Nation building at it’s best. If Germany and Japan had been handled in the same way back after 1945, Europe and Asia would still be bleeding. And make no mistake this is a bipartisan project. Bush sure wrecked Iraq and Afghanistan, but HRC did a number on Libya and Syria, and that is not gonna get any prettier.

Nation building at it’s best. If Germany and Japan had been handled in the same way back after 1945, Europe and Asia would still be bleeding.

It’s not as simple as that. Japan and Germany both had the wherewithal and organization, cultural capital, if you will, to be among the world’s leading industrial and technological powers before the war. Bombing their infrastructure out of existence did not remove that cultural capital, and it was that that allowed them to rebuild back into major industrial powers. I can’t think of any case in modern history where an occupying power engaged in nation building has managed to instill that kind of cultural capital in a nation that didn’t have it already. Arguably, had the Raj extended a couple more generations, the Brits might have succeeded in doing that, but there’s no was to know for sure.

The fact that Japan has been such a successful democracy doesn’t come from US policy, but rather from MacArthur flagrantly disobeying orders from Washington and pursuing his own reforms, especially land reform, taking land away from the landlords and giving it to the people who farmed it. By the time his bosses fired him for his intransigence, many of his reforms were already faits accomplis, and those were what gave rise to the democratic traditions and strong middle class that Japan still has today.

Arguably, had the Raj extended a couple more generations, the Brits might have succeeded in doing that, but there’s no was to know for sure.

Given that the British de-industrialized India, it’s an example of the reverse effect, if anything. That’s a much easier thing to accomplish, however…

Also Japan and Germany made a good amount of money producing consumer goods for countries that were producing war goods for the Korean War. I believe that had more to do with those countries once again becoming major industrial powers rather than any cultural qualities inherent to those respective countries.

Who could have seen that coming.

Unfortunately, greed and selfishness isn’t unique to Americans. So what we’re saying is they need a strong leader with the ability to instill fear and obedience to keep everyone in line? Because that seems to be the case.

Bush sure wrecked Iraq and Afghanistan, but HRC did a number on Libya and Syria

Obama (Why HRC? Was she President?) had/has no good options in Libya/Syria. Do nothing and allow atrocities to be committed. At least he should be lauded for what he did not do: send in ground forces.

No, I think what they needed in the first place is for a bigger, more powerful military to not come and fuck up their country.

Obama (Why HRC? Was she President?) had/has no good options in Libya/Syria. Do nothing and allow atrocities to be committed. At least he should be lauded for what he did not do: send in ground forces.

All they have in common is an obedience to imperial aims. They don’t care about human rights or the people in those countries and they never have.

Yeah, but now they’re going to have to admit it.

Saying “corruption” is another way of recognizing the factions and interested third parties are warring.

Making war shredded what was left of the social contract and vastly increased risks of all sorts.

Until a system of settlements and compromises can align a more legitimate governing consensus, there needs to be more and safer engagement.

It is way too easy to dismiss this by simply saying “oh they didn’t have the cultural capital” whatever that means. Frankly, this sounds a bit too patronising to me. Regardless, I also truly believe that there must be some middle level between economic miracle of Germany/Japan and failed state that Iraq/Afghanistan/Libya/Syria are now. I mean something half decent would do, and that surely was achievable.