Here are a few of the police reform ideas I’ve seen floating around. What others have you seen?

Note, I’m not saying these are things that should happen. They’re just the ones I’ve seen/heard/read. What about you?

Because of the thin blue line, most police are cop-outs.

End the use of firearms as compliance tools. Unless lives are in imminent danger, the gun stays in the holster.

Without responsibility applied for the killing of a person, reconciliation can’t happen. The cops are untrustworthy in part because they almost never are considered responsible for the lives they take.

Intuitively, community policing feels right. If a cop is policing their direct neighborhood, then they’d feel more of a tribal bond, and be less inclined to killing.

But the German style of continuous circulation seems to have great results.

And I don’t have data for comparison.

I’m generally pro-union, but something like 100% of everything I’ve ever read about police unions is the worst kind of awful.

So yeah, maybe smash those unions, leave the rest alone.

Changes in training, and Civilian Review Boards would probably be the most effective of these.

Camden NJ has gotten a lot of positive feedback from the reforms that their police force has undergone recently. There was a story on the national news last night that I saw. In it, they described how they are trained in DE-ESCALATING a situation, and I think that is vital. There is also an emphasis on community-policing. Also important.

No matter how solid the traing, there needs to be accountability for officers. If a cop shoots and kills a citizen, it should not mean a paid vacation for that officer until a review by the very institution that has every motivation to find them “Justified”. The police have no accountability when their watchdog is…themselves. The fox is guarding the henhouse.

For white people preoccupied with "doing something" https://t.co/Vk4rePfyD1 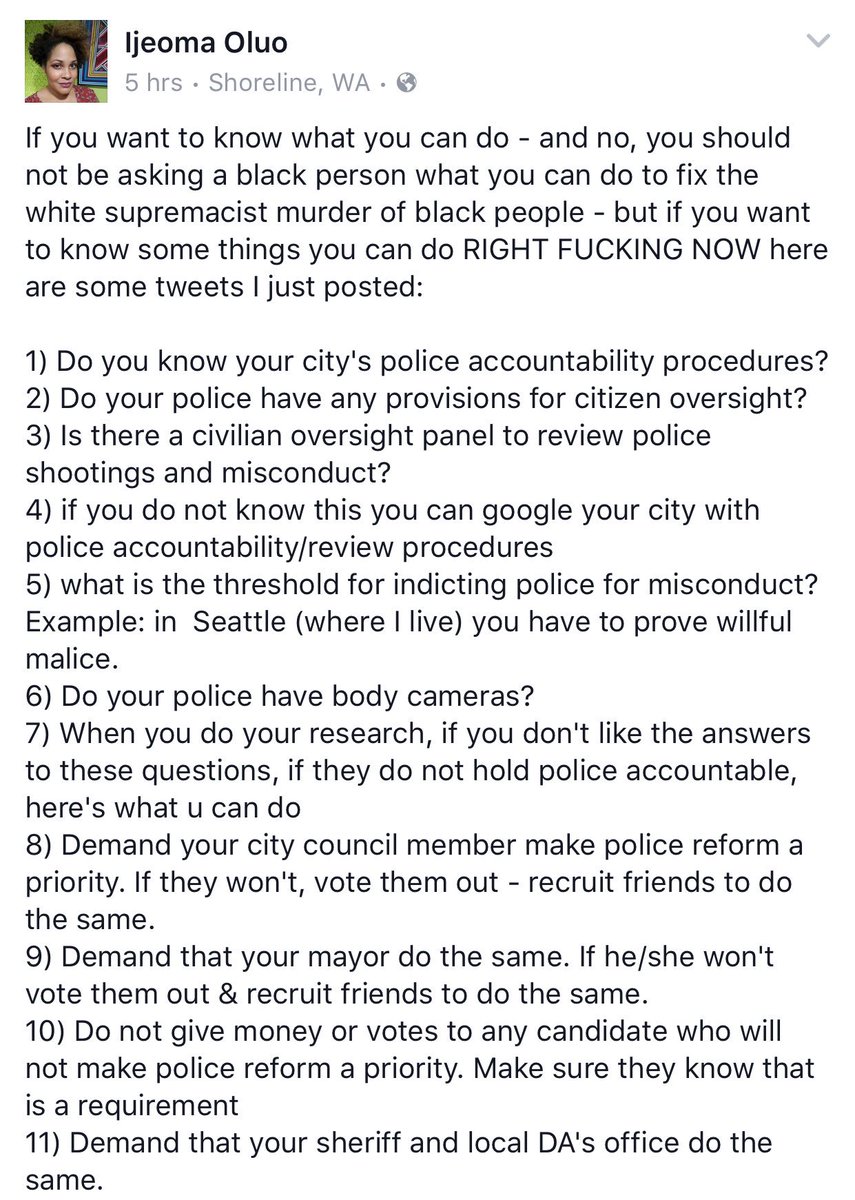 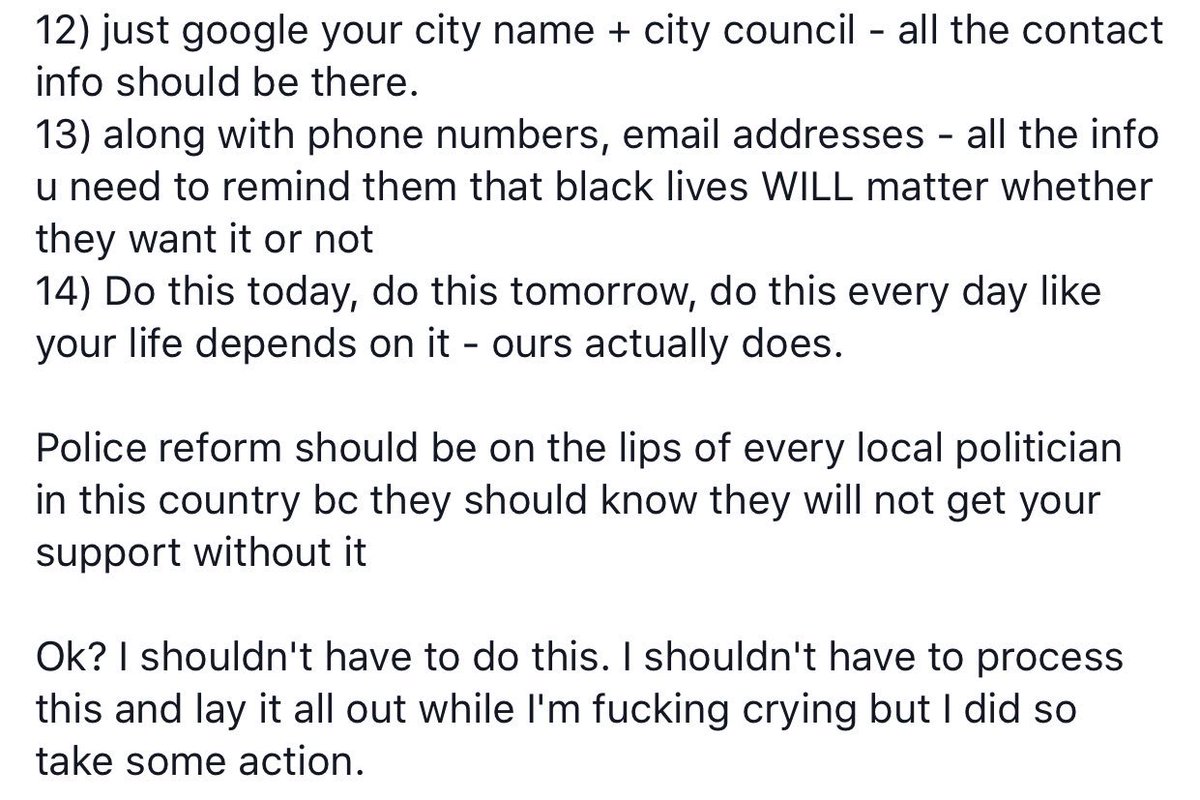 Internal affairs needs to be staffed by people who are not cops themselves. Recruit them from the ranks of insurance investigators or auditors, not the police.

Good cops need to be protected from reprisal. If you come forward and say that there’s a cop on the take, the culture needs to change so that you’re either anonymous or a hero, as opposed to being considered a traitor.

Prosecute heavily for destruction or alteration of body camera or dashcam footage. Also, if your camera was not turned on during a use-of-force incident, the cop gets a mandatory suspension without pay until the investigation is resolved. If the camera is on during the incident, functioning normally and pointing where it should, the suspension is with pay.

The sentencing guidelines for a cop who is convicted of a crime committed on duty should be double what a non-cop should get.

Each time a cop is involved in a use-of-force incident where the force used looks excessive, they are to be put in a job that has less danger and therefore fewer excuses for using force. Your elite cops should be those who are best at not using force, and those with a tendency towards violence should be put in a position where, if they use excessive force again, it’s blatant that it was completely unwarranted and they can be dismissed.

When a department gets fined for illegal or unconstitutional actions, at least some of that money needs to come out of the pockets of the officers. Bump the salaries up by 10%, but that 10% is a bonus and not guaranteed in the contract. If the department gets fined due to your actions, that comes out of your bonus first, before being put on taxpayers.

End the War on Drugs.

Overturn the “good faith” exception in the Supreme Court: if you violated someone’s civil rights, the evidence does not get to be included just because you were ignorant of what those civil rights are.

Finally, find a way to bring the poor out of poverty so that crime goes down and we don’t need as many cops in the first place.

Insurance might be a great tool for that since the courts have failed so profoundly to bring killer cops to heel.

I worry that the unions might defray those costs, but eventually they would want to ditch the most expensive cops

end the war on drugs

A thousand times yes, and end it a decade ago.

Willful Malice is virtually impossible to prove. That is how the (Seattle Police) officer (Birk) was able to get away with killing John T. Williams.

Birk pulled his gun before ever saying a word. He never identified himself as a police officer. He commanded Williams to “Drop the knife”, but never used the word “Police”. 4 seconds elapsed between verbal command and gunfire. The result? He lost his job. No criminal charges. I gotta think it’s because there is no way to prove “Willful Malice”. He just made some procedural errors…right?

It’s kind of like the built-in protection California cops have. The so-called Bill of Rights they have in place there gives them the right to not say a damn word for 10 days after an incident. 10 days to talk to a lawyer. 10 days to get your stories straight with your partner(s). 10 days more than I would get if I beat Kelly Thomas to death. (Go to ‘The List’, on The Guardian - you will find that California leads the nation in deaths by police encounter. By a wide margin.)

and the German style rotation

I read this a few times here on the BBS and have a (probably) stupid question - what exactly is this system? I’m not aware of German LEAs with a hard rotation scheme, though I don’t know all 16 police laws of the states in detail.

typically the police in all German states is organised in three layers:

the federal police has also SWAT teams and Bereitschaftspolizei units and is additionally responsible for transport security (airports, train stations etc), but they have afaik no rotation SOP and are used nation-wide

* I thought about this - they are not rotated at all, just used in different places. normally a freshly trained police officer is assigned to a unit (Hundertschaft, a unit size in the German police similar to a company) for 2 years or so. the units have a code of honour/silence as they are used as a fixed and stable collective

I think what they mean is just a natural side effect of police forces being rather big and covering a large area compared to the average American police force.

Here’s an interview on PRI’s The World with a police policy researcher who went to Scotland, where police (according to this report) aren’t routinely armed with guns. I found this very light on detail; I wanted to hear Scotland’s use of force policies and procedures that allow this to work. Really all I got out of this are that there’s a lot of talking and attempting to relate (seeing each other as human? that would be a step up), people are thinking about this is the U.S., and some within the police establishment are open to change. 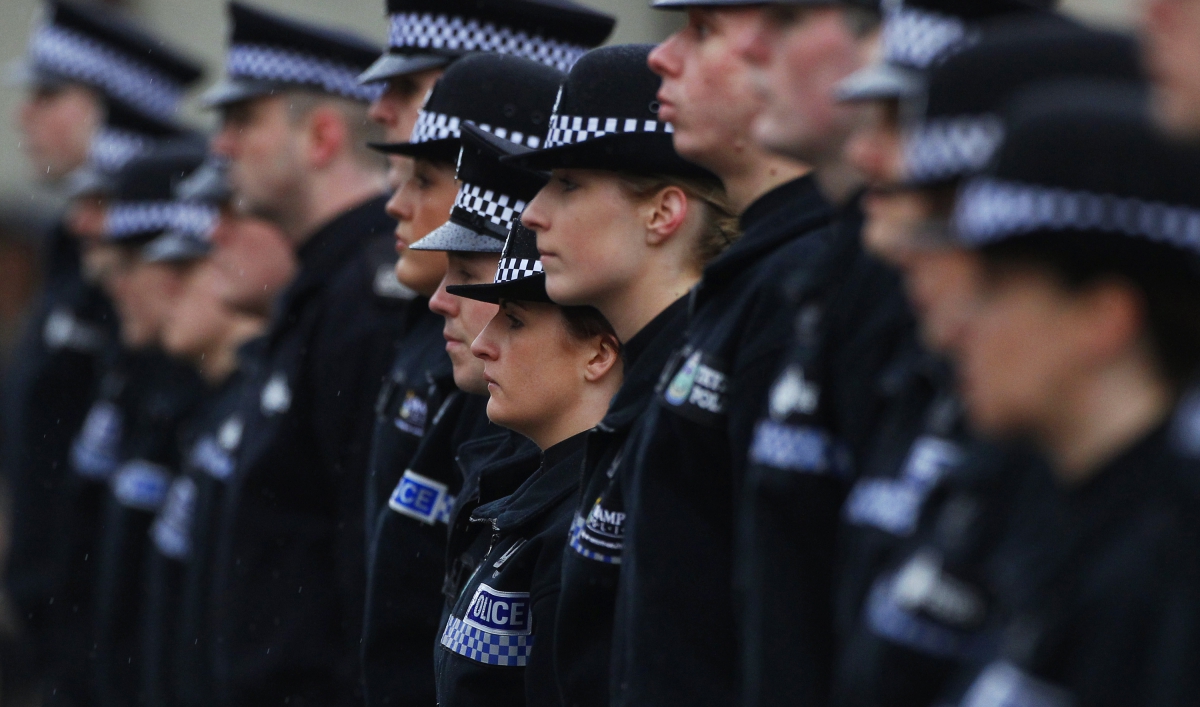 Most police officers in Scotland don't carry guns. How do they do it?

On a trip to Scotland, Chuck Wexler was struck by the fact that police officers there don't carry guns. He wondered whether the police in the US could do the same. So he took a group of police chiefs on a trip to Scotland to learn more.

Here’s an interview (also on Friday’s the World) with Ijeoma Oluo, the woman who came up with the list of suggestions above for white people who want to push for police accountability and improving the way they conduct themselves. 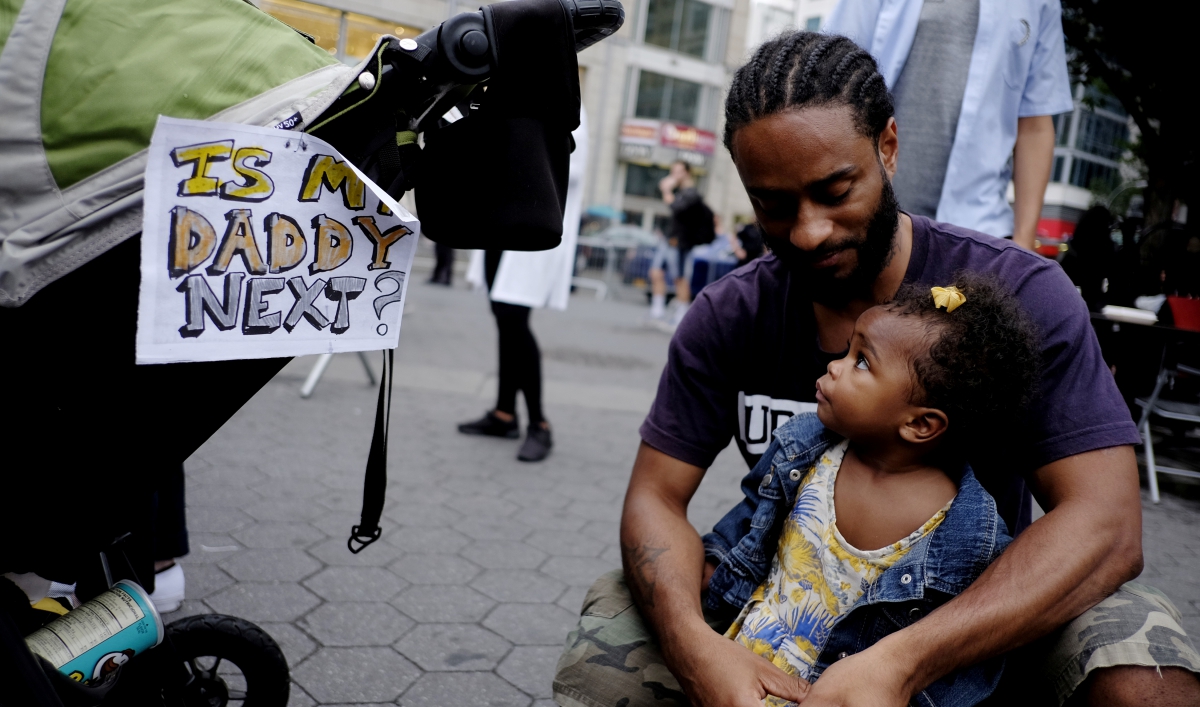 There's a lot you can do to hold US police accountable

Police reform is local, and you have more power in local government than anywhere else in the US electoral system.

So yeah, thanks for filling in the picture, I clearly don’t know anything about that. I just saw someone else say it here on the BBS.

good point, I will never wrap my head around the concept of a school district police

Honestly, I think the biggest thing is a combination of changing the personality profile for hiring and shifting emphasis in training.

For hiring profile, that should be kind of obvious. Pubescent manboys who get easily worked up have no business having power over other people’s lives. Period. Instead they should hire the sort of people who are non-confrontational and instinctively defuse rather than escalate. So none of the sort of personality that got involved in the Minnesota shooting, and all of the sort of person that thinks 'Let’s break up this fight with a dance-off’

It's not all bad

I know how easy it is to get down and feel hopeless, especially with so many high-publicity police related killings. But there's something a little poisonous about just attacking and being angry without having something to aspire to...without having somewhere we want to go. So, that in mind. Anybody have any GOOD interactions between authority figures and minorities? Ones that you just can't help but smile at? We can still be angry, but we also need to dream, don't we? I'll go first…

And it’s not an unusual profile, we have tons of them in the nursing, teaching, and caretaking professions.

As for training, that’s just a combination of …

And so on. There are tons of people who can handle this sort of thing, and who will happily put their lives on the line, especially if it means preventing the mess we’re dealing with now. Opinion | What the Dallas Police Department does right — and why doing those...