Pope Francis on the Internet and communication 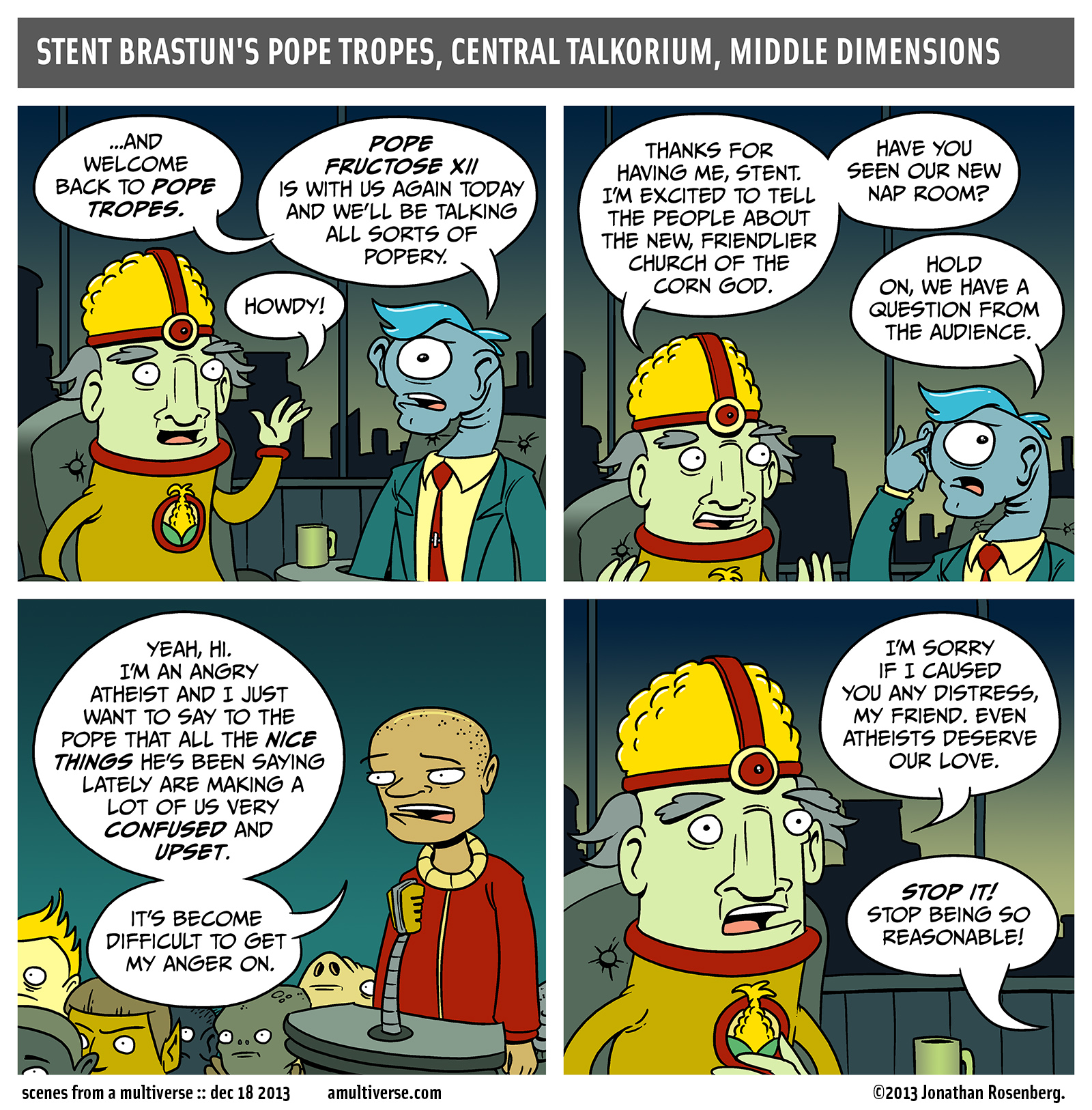 Popes! They’re always surprising you. I bet this pope loves to party. On Tuesday, we reached the first goal in our Patreon drive! Thank you to all of you who chipped in and helped make this s…

I love that comic.

I keep saying it, but I keep being astounded by it, Francis is just so shockingly likeable and keeps saying and doing such positive, progressive things for being Pope.

I mean, jeez, not that long ago we had Benedict, a man who literally looked like and figuratively acted like the evil Emperor from Star Wars - a horrible, scary, homophobic, xenophobic, grimly German absolutist that looked like the sort of guy who runs a military state and blows up planets with giant space lasers.

The world of communications can help us either to expand our knowledge or to lose our bearings. The desire for digital connectivity can have the effect of isolating us from our neighbours, from those closest to us. We should not overlook the fact that those who for whatever reason lack access to social media run the risk of being left behind.

While these drawbacks are real, they do not justify rejecting social media; rather, they remind us that communication is ultimately a human rather than technological achievement.

Whenever communication is primarily aimed at promoting consumption or manipulating others, we are dealing with a form of violent aggression like that suffered by the man in the parable, who was beaten by robbers and left abandoned on the road. The Levite and the priest do not regard him as a neighbour, but as a stranger to be kept at a distance. In those days, it was rules of ritual purity which conditioned their response. Nowadays there is a danger that certain media so condition our responses that we fail to see our real neighbour.

It’s not just that he’s saying the Internet is a gift from god, but that the ability to communicate and connect with other people is itself a fundamental part of being human. Further more, using that gift towards things like marketing or manipulative, dishonest rhetoric is a perversion of that gift, a sin equivalent to violently assaulting someone.

No wonder the CEOs and TV talking heads hate him so much.

…the problem with our idea of communication is that it assumes it’s the overcoming of apartness. We imagine individuals with different views of themselves and their world who manage to pierce their solitude by spewing out some sounds and scribbles. Communication! But, those sounds and scribbles only work because they occur within a world that is already shared, and we only bother because the world we share and those we share it with matter to us. Communication implies not isolation and difference but the most profound togetherness and sameness imaginable.

Seems fairly obvious to me it’s not either/or, it’s and.

Communication implies commonality and separation. There’s no getting away from the fact we’re fundamentally alone from birth till death, at least until we can have a high bandwidth IO bus poking out of our skulls.

Communication implies commonality and separation. There’s no getting away from the fact we’re fundamentally alone from birth till death, at least until we can have a high bandwidth IO bus poking out of our skulls.

That’s the rub, though. If you’re a theist, there IS getting away from that fact. There is an all-knowing, all loving, infinite cosmic mind who is with you in the most intimate and personal way from before you are conscious to after.

The world Pope Francis has faith in is a world in which none of us are ever as alone as we fear we are.

You can view this in a humanist light, too, though. Even without a god, our isolation is a shared experience – we all know that ultimate cage of our own minds. That’s something you and me and Hitler and Mao and Che and Mother Theresa and the Prophet Muhammad (PBUP) all share, as human beings.

Lonliness is, on some level, just a failure to notice the waters in which you swim.

I’ll reserve judgement until the guy tells Africa that it’s OK to wrap your junk.

As an atheist I’d be much happier with the pope saying rainbows are a gift from god, instead of insulting what is the most impressive and important human invention to date.

Very tangentially, the picture used to illustrate the post and its author’s name seemed familiar. Turns out it’s one of the latest additions to the outside wall of the Abode of Chaos, a rather fascinating modern art “museum” in southeastern France. (Google Streetview)

I figured it was the kind of place other Happy Mutants would enjoy.

Last time Pope Francis came up on this forum someone responded that “it’s easy to act humble when you’re sitting on a golden throne.” This turned out to be a poor line of attack, considering some of the changes he’s put in place.

I doubt I’ll ever agree with him on everything, but I’m digging his style.

I must admit - against all better judgment, I like this Duke pope.

And that’s why I like him. I keep waiting for the other shoe to drop. He’s the Pope, fer Chrissakes. He has an agenda. But so far, he has demonstrated in action and words that he is a humanist. So far, so good.

His “Who am I to judge gay people?” was a (pleasant) shock to me, and it set the tone for his papal reign. His pronouncements carry weight. With his accepting statement on LGBT folk, he further drove the dialogue of tolerance in Catholic communities.

Yes, I know he’s the Pope. I know he leads the Vatican. I know that the Vatican is engaged in actions that I consider despicable and which must be stopped by the church hierarchy. I am familiar with its history. Nevertheless, JPII, for example, made many changes (not all of them to my liking natch), and Frank could do the same. He’s all right with me so far. As far as Popes go.

Lonliness is, on some level, just a failure to notice the waters in which you swim.

I’m not speaking of mere loneliness; that’s just a mood.

I thought my mentioning the only thing imaginable that could overcome our fundamental isolation as individuals, ie a means to get one person’s process running on another’s hardware and/or vice versa, should have been sufficient to illustrate my point.

It’s only when your process can actually mingle with my process that we could truly stop considering ourselves individuals. Communication as we know it has certainly been a game-changer every time it’s significantly advanced in scope, but exchanging a few words by any current means is to what I speak of as futzing around with floppy disks is to grid computing.

Yes, I know he’s the Pope. I know he leads the Vatican. I know that the Vatican is engaged in actions that I consider despicable and which must be stopped by the church hierarchy.

Until Pope Francis I didn’t have a picosecond to spare for the Catholic Church and their legacy of shit.

But now, with this guy at the helm, there’s a chance Catholicism could actually turn out to be a global force for good…!

Alright! Love what you’ve done with the place.

Actually, it occurs to me there could be another reason we’re inclined to fawn over this guy:

Or not totally stupid. He hired professionals to manage his image.

Hey, just maybe he’s a totally cynical prick and this is all just a pose because unlike so many other high-falutin’ types he can actually sniff the breeze, but if so he seems a whole lot better at pretending to walk the talk than Obama.

Hasn’t he been making real waves from the get-go? From what people are saying, he really does seem like a new broom.

Or not totally stupid. He hired professionals to manage his image.

If this is all just about image management he’s taken it a lot farther than the typical CEO. He’s got the Pope gig for life whether people like him or not, yet he’s given up very real tangible benefits (a personal driver, a fancy car and a luxury suite in an actual palace to name just a few) as part of his “walking the walk” approach.