This is happening in my area. Corperation bought a trailer park, then gave the tenants a few months to get out. Trailers don’t sell well when they aren’t on land.

I’ve been watching it because it’s literally my last option for owning a place of my own. I’m in the greater Seattle area, and have been hopelessly priced out of housing. My wife and I struggled our entire lives to get jobs that paid well enough to actually own a home, and now that we have? The goalpost has been launched into space. It’s hard not to be a bit bitter about it, now that even buying a trailer is dicey.

Feel that? That’s the Invisible Hand of Free-market Capitalism squeezing the life from the nation. 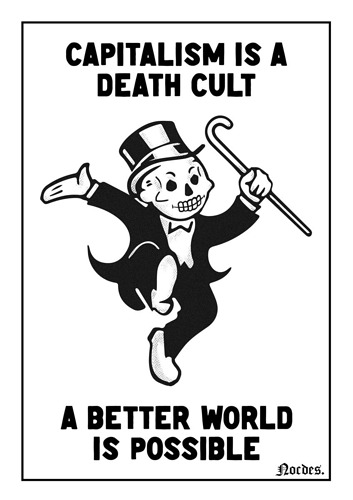 This is a widespread problem in the UK, too, with at least one well-known ‘thug’ landlord (and no compunction about calling him that, even if direct violence is not proven - his behaviour is classically that of a bully and a thug) appearing in the pages of Private Eye. And it’s not just tenants he abuses, he is subject to some council planning restrictions he has flouted (demolitions and tree/habitat removal without planning permission, etc.) 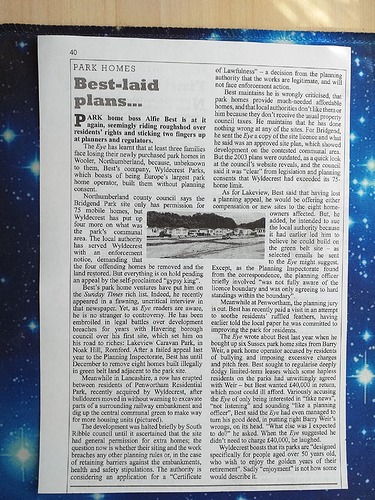 “Buying up _____ en masse” seems to be the trend for everything lately. If I may relate a tangential anecdote…

I was talking to a lifelong rockhound the other day about sites for collecting fossils. He said that in the last year or two, corporations have been sweeping up claims–old mines and quarries, other promising rock-hunting grounds, turning them into private property. Because of the potential for acquiring lithium. A large number of these sites are being bought but not used, they’re just sitting there unchanged, except now it’s illegal to visit them. They used to run field trips in my region, but there’s just hardly anywhere to go now.

Last Week Tonight did a good segment on predatory practices in the business a few years ago: 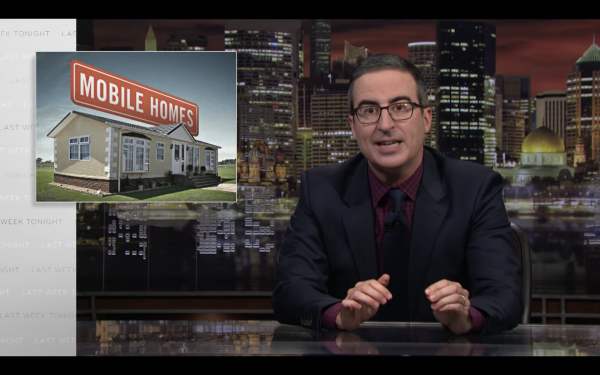 “Buying a mobile home and renting the land underneath it can be financially catastrophic,” says ‘Last Week Tonight’ host

Is he moving up on second base
Behind Nicholas Van Wotsisface
At six foot six and a hundred tons
The undisputed king of the slums
With more aliases than Klaus Barbie
The master butcher of Leigh-on-Sea
Just about to take the stage
The one and only
Hold the front page! 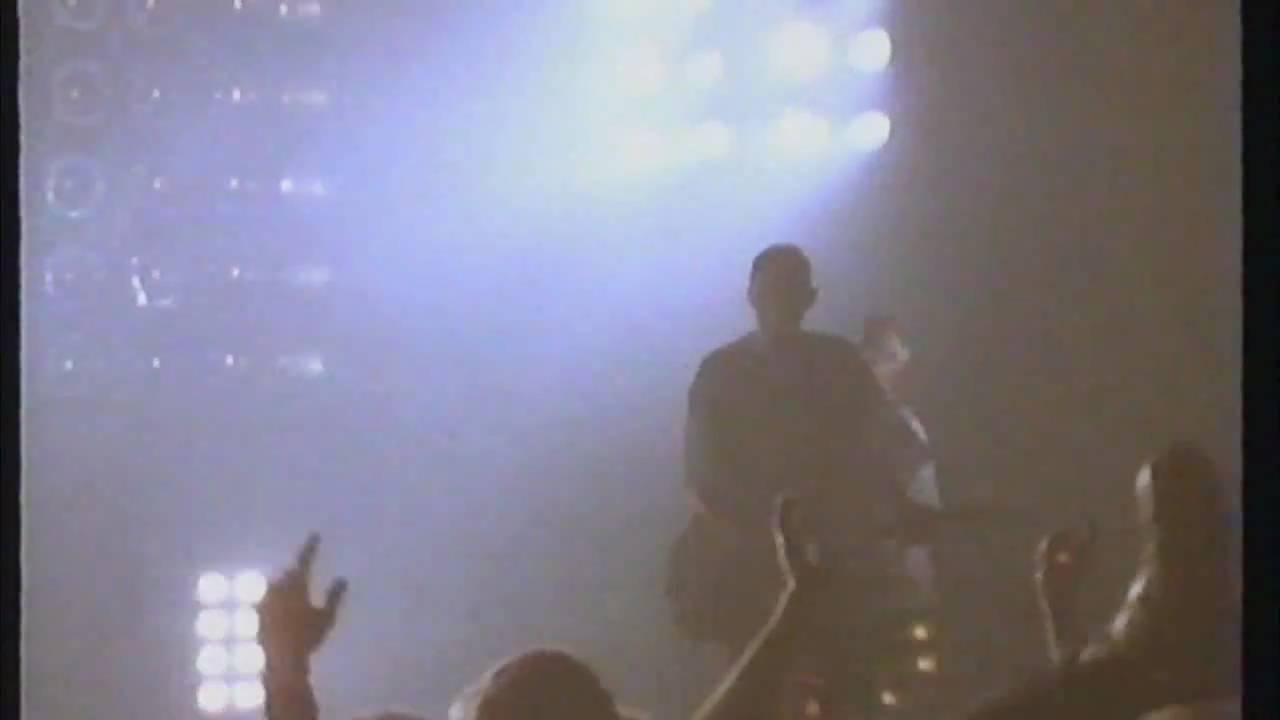 He is a real piece of shit, styling himself “Gypsy King” and pushing the rags to riches, and the media scoop it up and polish the turd. 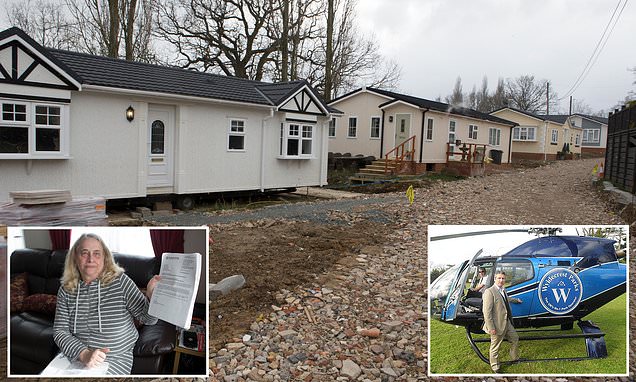 This is a phenomenon that has unfortunately for quite a while now — property managers at trailer parks milking their residents for everything they’re worth.

In addition to rising rents, these landlords charge fees for everything. If you have, for example, a pet, they charge you a fee.

In 2018, a corporate owner purchased Ridgeview Homes in New York. Before it happened, increases were rare. All it took was the new owner to take over and that changed.

In addition to putting up with the first two rent increases, residents were still putting up with sewage bubbling in the bathtub and “bourbon-colored” drinking water. When these problems were not resolved, and there was yet another 6% increase, the residents couldn’t take it any longer and formed an association.

Now this has become common practice. Fannie Mae and Freddie Mac may also be responsible, as they increasingly extend loans to those investors who buy trailer parks.

Happened here in Austin too. A lot of the trailer parks got bought out and are redeveloping for apartments, or mixed use commercial/apartments. One developer actually left the lot largely unchanged but swapped out all of the trailers for modern tiny homes, the project is actually quite pretty and well done (i go somewhat regularly to help the developer with gas related stuff for amenities) but i do wonder what it was like before this developer took it over.

I’ve been watching it because it’s literally my last option for owning a place of my own. I’m in the greater Seattle area, and have been hopelessly priced out of housing.

I’m curious to know if landlords (sealords?) for marinas are just as bad as the ones for mobile home parks. Buying a used boat that’s large enough to live on isn’t necessarily that expensive, and they’re easier to move locations when you need to, but I guess it must be tricky to find open slips.

My understanding, is that the monthly rent for docking is far higher than rent in a lot of places that I’d need to be in a bigger city. Plus you have to own the boat.

My understanding, is that the monthly rent for docking is far higher than rent in a lot of places

This article is probably out of date but it says that the slip fees range from about $400-$1000 a month depending on size. 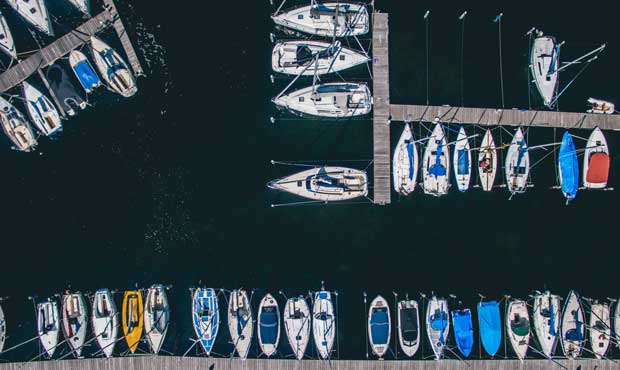 Is being a Seattle liveaboard a viable alternative to steep housing costs?

In the wake of rising housing costs, becoming a Seattle liveaboard may be less of dream, and more of a viable financial option. The waiting list is long, though.

Buying a used boat that’s large enough to live on isn’t necessarily that expensive, and they’re easier to move locations when you need to, but I guess it must be tricky to find open slips

Monroe County and city of Key West have taken aim at liveaboards here in the keys. liveaboards must upanchor and move to a new anchoage every 90 days. couple that with dwindling public areas to dock your runabout - the small craft you would use to get from your at-anchor liveaboard to get to the island to go to work or shop. in Key Largo, there used to be more liveaboards in Blackwater Sound and there was public mooring for small runabouts at the beach at the government center and Rowell’s Beach public park. no longer.
it is as if the county government is actively squashing any type of affordable living in the keys.
fucking NIMBYs.
edit: the liveaboards in the waters around the keys are at anchor in open water (mostly) and not moored at any marina.
this partly explains the governmental pushback on the low cost alternative to rentals on land that are outrageous if you can find one!

Marina Del Rey, CA is the largest small craft harbor in the US and can hold 5k boats.The boat slips, depending on location, are either owned by the Marina or by private businesses (apartment bldgs). Most slips that are available for rent will cost between $20-35 per foot length of your boat, depending on location. While this still works out to be about half the cost of renting on land nearby, Harbormasters refuse live-aboard permit requests more regularly than they accept.

Most marinas don’t allow liveaboards. It can also be difficult to get a insurance for an older boat (especially houseboats), which marina’s require.

Though there are some condo type ownership slips that allow liveaboards. Which seems a better way to insure your costs & prevent being kicked out for being a liveaboard as has been happening more & more for 20? Years.
Though you nave have to go to somewhere outside a city to find them & be more affordable. Still not easy.

“Buying up _____ en masse” seems to be the trend for everything lately.

My dentist! His office just got bought up by some corporation that looks forward to discussing my goals for my teeth and letting me know about their auxiliary services.

We need some real protections with rent and living areas, because this constant squeeze is bad for individuals and ultimately bad for America and the economy.

I just left my shitty apartment after they raised my rent year after year with no real upgrades in amenities. Just cheap ass BLACK (or very very dark grey) vinyl siding that comes off with a wind storm.

Hear, hear! (Almost the last bastion of real investigative journalism left in the UK - which I may have said here before, but a plug is always a good thing. Subscribe today, if you can, people! One of the last remaining publications whose content is NOT available online, and is worth every penny.)