I thought the idea went back even further than World War I. 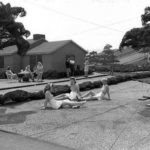 The destruction of a lesser-known Seattle pseudo-suburb is underway. This series of a dozen square blocks was lofted forty feet in the air but, despite looking picture-perfect (a series of pristine streets, homes, yards and trees) it was never...

Although it is not true, there was this story about how the Germans built a fake town but all the buildings were only a foot tall. The British were not fooled at all. They came over and dropped wooden dummy bombs on the badly conceived ruse. It sounds good but it was only a story.

ISTR that in North Africa, the Brits built a 2/3rds scale rail yard. Because in the desert, from a height, there wasn’t really anything to tip off that it wasn’t full size and it saved on material.

Those are unfortunate pictures that hope to capture grandeur without any measurable man to refer to.

Here is some who thinks the wooden bomb did happen. It does have all the classic traits of an urban myth, and it doesn’t make a lot of strategic sense.

The Riddle of the Wooden Bombs – Airminded

Pierre-Antoine Courouble. The Riddle of the Wooden Bombs. Toulon: Les Presses du Midi, 2009. One of my early posts on this blog was about a story which goes something like the following. The Germans are constructing a fake airfield to decoy Allied...