Proposal: replace Algebra II and Calculus with "Statistics for Citizenship"

Well a good understanding of statistics would cut down on the panic of ‘substance XYZ’ causes ten times increase of cancer risk panic. Which of course usually turns out to be 10 times some tiny factor which makes a not quite as tiny but still not anything to worry about factor.

Yes, and I’d prefer that my doctor had studied statistics, rather than some sort of soft bedside manner/human interaction nonsense. My doctor’s prime motivation should be keeping me alive, not making me comfortable in his presence.

May I stand up and give Andrew Hacker a standing ovation?

Algebra II and Calculus destroyed the GPA of so many kids in art, literature, and music courses. They’re ridiculous requirements for high school kids, especially since they know, day one, that they will never use any of this in their lives or future schooling, so there’s zero motivation to work hard at it.

No idea why Cory links proper education to the sale of lottery tickets, though. Whether you’re a high school dropout or Einstein, gambling with a dollar isn’t a reflection on your intelligence or education level. Sometimes it’s just fun.

Down with lottery dreams!

I understand the state wanting a monopoly on gambling, but advertising it is a criminal attack on the ignorant and desperate in society!

There is a reason that writing and maths have traditionally been reserved for the elites, and it is not a good reason.

I think America needs to add “Practical Abnormal Psychology” to the curriculum, as that would be just as helpful in avoiding the Drumpfs of the world.

gambling with a dollar isn’t a reflection on your intelligence or education level. Sometimes it’s just fun

For me and everyone I know it comes down to an excuse to tell your friends about your wish fulfilment fantasies. Which is a kind act, and encourages bonding.

I drop a buck a year in Powerball not to win anything, but as an excuse to talk about the innovative, free range, cage free bakery I’m gonna open.

Why yes, I am insufferable. Why did you all ask at once?

My sister-in-law is an OBGYN and was talking during our last visit about how the doulas make more money per-patient that she does, and that any advice, no matter how well-backed can be easily overruled by the say-so of the doulas. To my mind, this points to the general population choosing bedside manner over knowledge. Doulas are all bedside manner, all the time, and, to be fair, were most likely created by a history of a bizarrely patriarchal and condescending OBGYNs. This is shifting now (Our OBGYN was amazing, as were all the nurses and midwives) but clearly truth has to be well-packaged and patient, or it has no hope of surviving in a marketing-friendly world.

I took (relatively) high-level math in high school- partly because I intended to become an engineer.
Alas, that didn’t take.
In my adult life, the most useful math I ever took was an AP Stats course. Fundamentally changed how I looked at data.
Runner up is geometry (mostly because I like to build things and it can help).

I don’t get the lotto association - it’s a form of gambling - I can buy a whole week of good dreams for a dollar, what exactly is wrong with that?

I could get the point if they said ‘Produce a cohort that never gambles more than they can afford to loose with false expectations that ‘if I play enough I’ll win’’ - that is a relevant statement. The correlation between large powerball jackpots and Trump honestly is spacious and has no basis in reality. The correlation between large powerball jackpots and increasing the cost of the ticket, and the numbers that the jackpot draws from (lowering the odds) is something that you can prove. The jackpots haven’t gotten bigger because more people are playing - they’ve gotten bigger because instead of paying out they rigged the game so it would on average roll over.

The fact that more people will ‘waste a dollar’ for a chance at such a large sum of money isn’t lost on them. The fact that people can afford to ‘waste a dollar’ isn’t a blight on society. There is value in a game of chance even if you happen to despise the game itself, and that is people get a thrill from risking some portion of value at the chance for big money. Were these things not true con artists wouldn’t have a job.

Runner up is geometry (mostly because I like to build things and it can help).

It’s interesting that I loathed Algebra and nearly failed Algebra II, but Geometry was a joy. Imaginary numbers and functions were godawful. Writing geometry proofs was not only easy for me, but fun! Every graphic designer or artist I know had the same experience. Different brains work in different ways.

This makes so much common sense that I am sure it is doomed. Just wait until the Algebra and Calculus lobbyists starts to fight this… 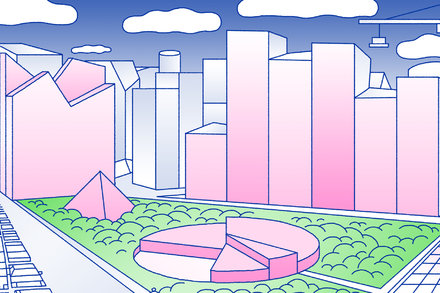 Think about numbers as a language; we need to learn to be fluent in it.

the doulas make more money per-patient that she does

That’s about the OBGYN’s overhead. Her practice bills the patient a hell of a lot more than the doula does.

“You tested positive for this. This test has a 5% false-positive rate, so there’s only 5% chance that it’s wrong.”

I appreciate the idea of statistics being a more useful field of study (though I reject the suggestion that even moderately advanced math somehow exists outside of the “real world”), but isn’t the whole point of education to get students interested in new fields and teach them the skills they’ll need to succeed in them?

There’s just a whiff of “teachers aren’t doing their jobs so great, so they shouldn’t have to do them.”

Yes. I’ve taken a 400 level college math course on probability and statistics and I still buy lottery tickets… I figure that’s how I pay rent on my fantasy.

Please forgive me, as I do not mean to detract from this excellent post and discussion. But I think I am becoming annoyed with the ‘Drumpf’ thing. I by NO MEANS am trying to defend that oompah-loompah sack of orange shit, (Bernie 2016), but how does using what boils down to an ethnic slur, make you any better than Trump himself? The name was changed over a hundred years ago (anglicized when they immigrated into America to avoid (irony alert) discrimination and to ease the transition.) It was his great grandfather or grand father who changed it. So when you use ‘Drumpf’, how is it any different than calling Obama ‘Barack HUSSEIN Obama’? To me, it sounds like you are stripping away his American-hood and calling him his ethnic name in a derisive way. Anyways, sorry again to sideline a great post, but I was surprised to see Cory use this term, as writers are a little more insightful than the rest of us and usually not prone to getting caught up in things like this without turning them over a few times at least.

P.S.: Another thought. There is an abundance of things to ridicule and criticize that Trump actually did HIMSELF, so choosing something that he isn’t even responsible for sends the message to a psychopath like him that he is above reproach. “See, all they can do is call me names, ethnic slurs, that I didn’t even have anything to do with. It’s because they know I’m right and they are scared of me.”

I can buy a whole week of good dreams for a dollar, what exactly is wrong with that?

It’s sad? I can have a whole week of good dreams for free, and I have a statistically identical chance of achieving them. If you want to do something fun and slightly irresponsible with a dollar, buy a popsicle.

Except, there will be a point in your life when no amount of statistical competence on part of your doctor will keep you alive. If you are anything like the rest of humanity, at that moment you will most likely appreciate a bit of human interaction on the part of the professional you will encounter.